With COVID-19 infections spiking in the outside general population, it is no wonder that it is running rampant in the prisons. Recent news out of the Federal Correctional Institution in Danbury, Connecticut (designated in the Federal Bureau of Prisons as a “women’s prison”), revealed that more than half of the people incarcerated at its prison camp tested positive for COVID-19. 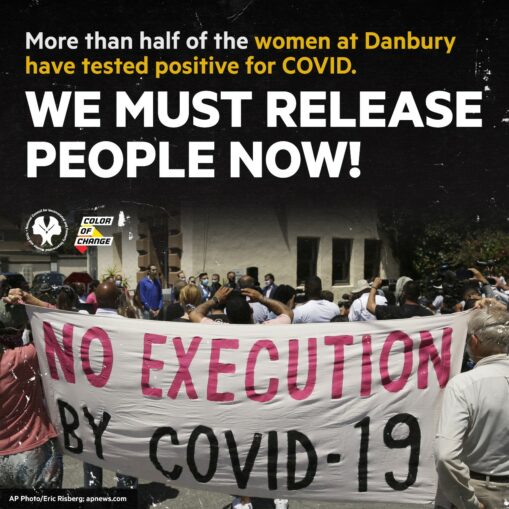 After testing positive at the end of December, the women, transgender and gender-nonconforming prisoners were sent back into the general population of the prison camp, where they were not informed that they had COVID-19, nor were they put into isolation. (newstimes, Jan. 4)

It took the intervention of U.S. Senators Richard Blumenthal and Chris Murphy, and U.S. Representative Jahana Hayes, all of Connecticut, who fired off protest letters to the U.S. Attorney General, the Director of the Federal Bureau of Prisons and the acting warden of FCI-Danbury. The elected representatives are demanding an immediate investigation into the failure of prison officials to adhere to COVID-19 isolation procedures.

In the letter, the three federal legislators stated: “These actions, if true, are shockingly reckless and contrary to BOP and CDC guidelines regarding the isolation of individuals who test positive for COVID-19.”

Unlike the outside world in this age of social media, it is often hard to find out what is happening to people behind the walls of U.S. prisons. The federal prison system is especially notorious for hiding the truth.

Unfortunately, a Congressional letter alone may not be enough to reel in the uncaring and reckless FBOP. Last year after a major COVID-19 outbreak, the Danbury federal prison was singled out by then Attorney General William Barr for large releases of prisoners to home confinement. Needless to say, very few prisoners were released home, as has been the case around the country. And prisoners, including the medically-vulnerable and pregnant people, have continued to be exposed to COVID-19 infection. (New York Times, Feb. 27)

The Color of Change and the National Council of Incarcerated and Formerly Incarcerated Women and Girls have an online petition demanding a mass release of the medically vulnerable at FCI-Danbury. (tinyurl.com/ye2ydp9u)

Clearly the demand for the mass release of all prisoners suffering from and vulnerable to COVID-19 must be heard loud and clear throughout this inhumane and unjust criminal legal system.