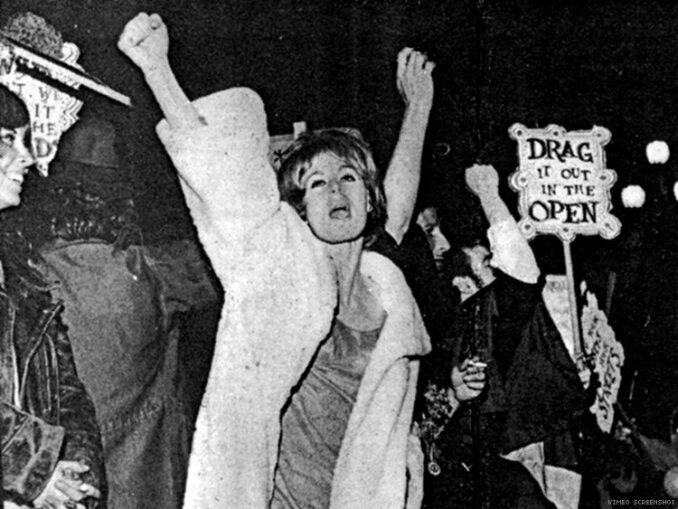 Russian revolutionary and Marxist theoretician Alexandra Kollontai reflected on this in her 1917 speech “Why the Bolsheviks Must Win,” when she stated: “Only the victory of [revolutionary] democracy can ensure women equality.” (archive.org/stream/Kollontai/Kollontai_djvu.txt)

These words are applicable to other struggles, such as the struggle against racism  — and especially to queer and transgender struggles.

After World War II ended in 1945, by 1947 the U.S. government had opened a campaign to rid its State Department of all LGBTQ+ people and suspected communists. In the eyes of reactionaries, these two groups were one, based on the idea that queer people were uniquely susceptible to communist propaganda. The government developed security guidelines that removed many from their jobs and positions of responsibility. The groups targeted were LGBTQ+ people, communist and socialist sympathizers, as well as alcoholics and others deemed “dangerous” and a threat to U.S. government and society.

In the late 1940s and early 1950s, the U.S. government began a witch hunt against queer people and communists. On Feb. 9, 1950, at a speech in West Virginia, Senator Joseph McCarthy waved his infamous list of 205 “known” communists in the U.S. government, dubbed “enemies within.” Other members of Congress took up the mission of harming LGBTQ+ people: Senators Styles Bridges (R), Kenneth Wherry (R) and Clyde Hoey (D). They were all responsible for whipping up the anti-queer frenzy. Hundreds of people were harmed by them and their crusade.

At the same time in the 1950s, queer liberation groups were being founded and led by “card-carrying” members of the Communist Party. The Mattachine movement was led and shaped by Harry Hay, who was a Marxist theorist, a teacher and member of the Communist Party-U.S.A and previously the Industrial Workers of the World. He worked with other comrades organizing among the working class in California.

An unfortunate fact, however, was that LGBTQ+ people were not accepted in the CPUSA at the time, following a 1934 rightist decision by Joseph Stalin to deny rights to queer people in the Soviet Union. At the time Stalin was  secretary-general of the Communist Party of the USSR. His position was a reversal of the Leninist policy of accepting queer people as members of the Party and of the working class.

Stalin’s position was that queer people were the end result of decadent capitalist ideology. Previously the Bolshevik government had removed all anti-gay and what are now known as anti-trans laws which had been in place under the tsarist regime.

This unfortunate line didn’t stop queer communist organizing in the U.S. Five gay men — Harry Hay, Rudi Gernreich, Dale Jennings, Bob Hull and Chuck Rowland — oversaw weekly meetings in Hay’s home. Hay, Hull and Rowland were all members or former members of the CPUSA. The others were fellow travelers — members of the movement who were nonparty members.

This grouping started the Mattachine Society. Its stated goals were to unify gay people, educate society and to get socially aware gay people into leadership in their community. In the service of that mission, they created questionnaires to study the impact of bigotry on their community. In many instances, it was the first time queer people, in this case gay men, had ever been asked about their experiences.

Harry Hay, in a sad turn of events, had chosen to ask for his own expulsion from the CPUSA on the basis that his gayness could serve as a weakness for the Party. The leadership rejected expulsion but dropped him as a security risk. They did acknowledge his timeless and important contributions by saying he would always be a friend of the people.

Meanwhile, the left-led Mattachine Society faced intense scrutiny and red-baiting. Members joining the society were scattered across the political spectrum. Some were left-wing, but many others were to the right to the point of anti-communism. Some members wanted the group to take an anti-communist stand.

Unfortunately, Harry Hay took up a right-wing, conciliatory stand by attacking the left and equating the backwardness of the Communist Party and the outright fascist attacks by the right-wing. Eventually, the left-wing Mattachine leadership who had belonged to the Communist Party or were its allies had to resign. The organization essentially lost its revolutionary spirit and ended up damaging the movement.

In the mid-1960s the Mattachine Society and the Daughters of Bilitis (a lesbian organization that was not communist-led) took a rightist position that acting according to heterosexual norms — men and women in rigid masculine and feminine clothing and activities — would make people be more accepting by seeing that LGBTQ+ people are “just like” heterosexuals.

In 1966, the Compton’s Cafeteria rebellion broke out in San Francisco. (comptonscafeteriariot.com) Trans women, queer hustlers and others — tired of being mistreated by the police in the Tenderloin neighborhood — took up cups of hot coffee and glass sugar shakers as weapons against the police. They even burnt cop cars to a crisp. They were winning until the police redoubled their efforts to crush the rebellion. While not communist-led, they were supported by revolutionaries in the area.

Little did anyone know that the Compton’s Cafeteria Riot — which came and went without much notice from the rest of the country — would be a portent of revolutionary things to come.