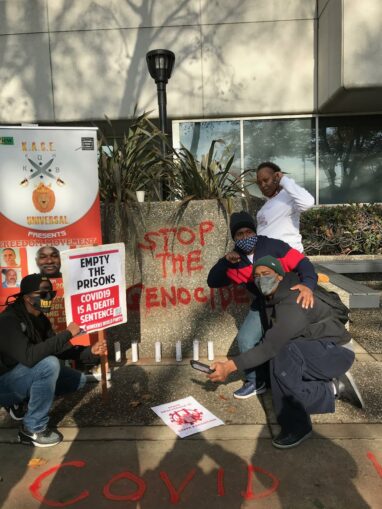 Prisoners’ rights activists demonstrate in front of the California Department of Corrections and Rehabilitation, Sacramento.

California state prisoners are experiencing a dangerous surge of COVID-19 infections, fueled by the omicron variant and the refusal of prison guards and contracted staff to be vaccinated, according to family members and prisoners’ rights attorneys. Gov. Gavin Newsom, who refused to order mass releases during the first surge of COVID-19 in the state prisons, has taken a position against ordering mandatory vaccinations for prison staff. The lives of tens of thousands of prisoners are at risk right now.

Workers World was recently contacted by family members concerned about the rising COVID-19 infections at the California Medical Facility at Vacaville, which incarcerates perhaps the largest elderly and medically at-risk population of men, transgender and gender-nonconforming prisoners in the state.

A recent legal brief filed by the Prison Law Office and other attorneys in the class action lawsuit, Plata v. Newsom, documents the disparity between the vaccination rates of prisoners, guards and contracted prison staff especially at CMF and the California Health Care Facility in Stockton. (Joint Case Management Conference Statement, Dec. 16, 2021)

The prisoners’ attorneys expose the fact that prison staff who are not vaccinated are also refusing to get tested regularly. Not surprisingly, the California Department of Corrections and Rehabilitation has not been forthcoming with accurate information about staff vaccinations or testing. In fact, nearly one-third of prison staff has not been complying with court-ordered, twice weekly testing requirements.

Meanwhile, CDCR has reported 400 new infections, a number that has doubled over the last week. Attorneys, family members and prisoner advocates are deeply concerned that low vaccination rates among CDCR employees are causing this new wave of dangerous COVID-19 infections in California prisons.

“The second crisis is here, and the thing that we feared with delta is now happening with omicron,” said Olivia Campbell, who has a loved one at CMF. “The numbers during the past three days have gone up to over 400 active cases. It’s not like anything has changed.” Campbell has been trying to alert state legislators and others about this crisis.

Campbell is particularly concerned about the outbreak of COVID-19 in the prison hospitals. She noted: “CMF holds the oldest, the most disabled and medically vulnerable prisoners in the state. The safety of these people is being flagrantly violated.”

CMF just announced that it was canceling all visiting due to the spread of the highly contagious omicron variant. Several of the housing units are on lockdown; concern for the safety of these highly vulnerable prisoners is mounting.

CMF has a long history of activism and involvement stemming back from the early days of the HIV/AIDS epidemic. This prison had a segregated unit housing prisoners with HIV/AIDS and transgender prisoners. While the unit no longer exists, CMF now has the only prison hospice in the state.

Last year before there was a vaccine, frequent transfers of prisoners fueled the spread of COVID-19 in California prisons. The infection rate at San Quentin State Prison in the Bay Area was so high that a federal judge ordered that the prison population be reduced by 50%. Prison abolition groups organized frequent large and militant demonstrations and other actions outside the prison, demanding the immediate release of thousands of elderly and immunocompromised prisoners.

There were no mass releases, but due to prisoner access to vaccines, the pandemic slowed down for a bit in the prisons. However, there is every indication that this is about to change. The biggest outbreak now is at Wasco State Prison, one of the state’s reception centers. Due to the rising infection rate there, Wasco has been closed to new prison admissions.

The second surge of COVID-19 in the prisons will need a new resurgence of activism by outside organizations. Campbell is hoping that the movement to support the lives of people inside the walls will return. “The outrage should not peter out but should become louder given what’s happening now.”