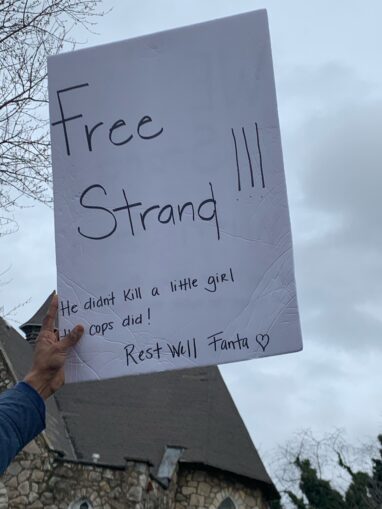 A march for Fanta Bility, the 8-year-old girl murdered by Sharon Hill police in Delaware County, Pennsylvania, this summer and for teenagers, Hasein Strand and Angelo “AJ” Ford, falsely charged in her murder, brought 100 community activists and family members of Fanta Bility and Hasein Strand together Dec. 11.

The Bility family has previously stated that justice for Fanta will come when the police involved are identified and held accountable. The Bility family and the families of the falsely accused teenagers have taken a united stand on this.

The march began at Academy Park High School, where in August police shot into a crowd leaving the football stadium after a game. Police fired into a vehicle they mistakenly suspected of being involved in another incident, killing Fanta and wounding three others.

Community outrage has centered on the lack of police accountability and the trumped-up charges leveled on the two youths involved in a separate incident by Delaware County District Attorney Jack Stollsteimer. None of the officers involved who shot and killed Fanta have been identified or charged.

Under a Black Lives Matter banner, the marchers took to the streets and walked from the high school to the police station. Speakers called for DA Stollsteimer and the police to take action to allow the close-knit Philadelphia suburban community to heal.

Activists spoke of growing up in Sharon Hill and never experiencing the lack of respect and decency from law enforcement and elected officials that they are witnessing since the murder. The marchers proceeded to a main thoroughfare in Delco and shut down traffic to holiday shoppers.

Many drivers honked car horns in support. Hasein Strand’s family wore “Stand with Strand” sweatshirts. Family members, young and old, passed around a cell phone when Hasein called during the march. His mother said the call where he could hear the crowd chanting would be a major lift for her son. She is confident that the community pressure will go a long way to winning his freedom.