U.S. and Western imperialism are super-obsessed with finding any angle to demonize and smear the People’s Republic of China, politically, economically and culturally. A main strategy for these anti-communist attacks on China has been accusations of so-called human rights abuses. 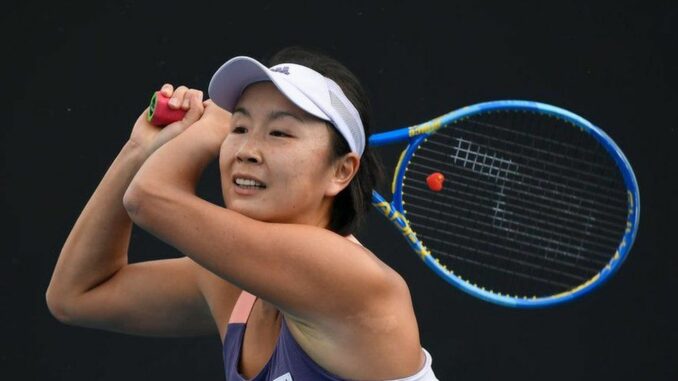 For example, President Joe Biden has gone on record calling for a “diplomatic boycott” of the 2022 XXIV Winter Olympics to be held Feb. 4-20 in three cities in China: Beijing, Yanqing and Zhangjiakou. He cited “human rights violations” as the reason. This boycott would mean no U.S. diplomat would attend the opening and closing ceremonies of the games, while U.S. athletes would be allowed to compete.

When the boycott was confirmed at a Dec. 6 White House press conference, the Chinese Embassy in Washington, D.C., tweeted that politicians announcing a boycott are “doing so for their own political interests and posturing. In fact, no one would care about whether these people come or not, and it has no impact whatsoever on the #Beijing2022 to be successfully held.”

Now this call by Biden has been upstaged by another development connecting sports with politics.

Peng Shuai is a 35-year-old Chinese tennis player and former world doubles No. 1. She has won two major doubles titles — at Wimbledon in 2013 and the French Open in 2014 — and reached the semifinals at the 2014 U.S. Open in singles. She has earned 25 titles on tour.

On Nov. 21, Ms. Peng conducted a 30-minute video call with International Olympic Committee President Thomas Bach, Athletes’ Commission Chair Emma Terho and member Li Lingwei, a former vice president of the Chinese Tennis Association, to say that she was well, spending time with her family and wanted her privacy to be respected.

@CGTN stated on Twitter: “Hello everyone, this is Peng Shuai. Regarding the recent news released on the official website of the WTA, the content has not been confirmed or verified by myself and it was released without my consent. The news in that release, including the allegation of sexual assault, is not true. I’m not missing, nor am I unsafe. I’ve been resting at home and everything is fine. If the WTA publishes any more news about me, please verify it with me, and release it with my consent. As a professional tennis player, I thank you for all your companionship and consideration. I hope to promote Chinese tennis with you all if I have the chance in the future. I hope Chinese tennis will become better and better. Once again, thank you for your consideration.” (Nov. 17)

Strongly indicating that they were skeptical of the authenticity of Peng’s tweet, Steve Simon, the chairman and CEO of the World Tennis Association, along with its Board of Directors, indefinitely suspended all tennis matches in China, including in Hong Kong, for the coming year.

Simon stated on wtatennis.com, “The WTA has been clear on what is needed here, and we repeat our call for a full and transparent investigation — without censorship — into Peng Shuai’s sexual assault accusation.

“None of this is acceptable, nor can it become acceptable. If powerful people can suppress the voices of women and sweep allegations of sexual assault under the rug, then the basis on which the WTA was founded — equality for women — would suffer an immense setback. I will not and cannot let that happen to the WTA and its players.” (Dec. 1)

Any person who says that they have been sexually abused or assaulted should not be questioned and should always be taken seriously. But would any objective, thinking person ever believe that the WTA and the U.S. government could care about a woman making an accusation of rape or sexual assault in China — or anywhere else in the world — except for an ulterior political motive to use the charge to benefit U.S. government machinations? And what about the previous U.S. president being a virulent misogynist as well as a white supremacist? U.S. society is riddled with all forms of systemic exploitation of women and woman-identified persons, which the U.S. government allows and usually intensifies.

The U.S. imperialist government — and its apologists like the WTA or the IOC — will use any development to attack a country whose government asserts its independence from the U.S.

Pushing its oppressive agenda, including white supremacy, patriarchy and anti-communism, the U.S. will exploit any real issue of concern, including sexual abuse, in an attempt to isolate their biggest economic rival, China.

Think of how the hundreds of gymnasts must feel right now hearing how the WTA, the IOC and others are falling all over themselves to defend Ms. Peng. These same entities allowed these U.S. athletes to endure many years of painful, humiliating sexual abuse at the hands of Dr. Larry Nassar, with the complicity of Michigan State University, USA Gymnastics and Olympic officials. These gymnasts, including the great Simone Biles, have placed the rightful blame on the FBI, USAG and others for lack of support, accountability and the gymnasts’ ongoing mental and physical issues.

The U.S. is the biggest human rights abuser amongst all the imperialist countries. Sexual abuse of all forms runs rampant in this country, along with other terrible crimes of capitalism — including police brutality, mass incarceration, the death penalty, LGBTQ2S oppression and much, much more.

The U.S. has no credibility and no right whatsoever when it points the finger of blame and tries to interfere in the internal affairs of another country.