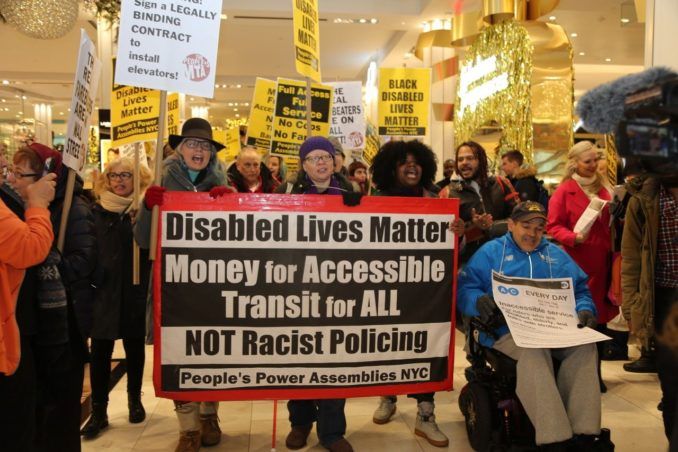 This protest was held inside Macy’s department store, New York City, on the International Day of People with Disabilities, Dec. 3, 2019.

The Convention on the Rights of Persons with Disabilities was adopted by the U.N. in 2006. Some 177 countries have ratified it — but not the United States, which has also failed to ratify human rights treaties defending women, children, migrant workers, and Indigenous peoples.

The CRPD — unlike the Americans with Disabilities Act (ADA) — does not include any specific or limited definition of disability nor require medical proof. It mandates for disability community advances in human, social, economic development and the abolition of poverty. The CRPD makes the entire state apparatus, and not just the individual employer or landlord, responsible for providing access. The language of the CRPD affirms the right of all people with disabilities to live in the community and have sufficient support to guarantee such independence.

In New York City, the Peoples Power Assemblies organized their sixth consecutive annual protest for IDPD on Dec. 3. Activists greeted Penn Station rush hour commuters both outside and inside the huge transportation terminal, raising the demands: “Full access, full service, no cops, no fares!” Previous PPA protests on this day had greeted holiday shoppers in Macy’s department store, as well as pedestrians and subway riders at an inaccessible subway station on East 23rd Street.

A PPA flyer handed out by participants advocated that the city’s budget for police officers be spent building elevators and making every subway station accessible for all New Yorkers. PPA was joined by disabled activists and allies from Disabled in Action, the Disability Justice and Rights Caucus of Workers World Party and other groups.

The rally was chaired by PPA leader Terrea Mitchell who told folks that as many as half of people killed by cops have a disability. WWP member Renée Imperato related her testimony given earlier that day at the monthly community meeting of the NYC Mayor’s Office of People with Disabilities. There she had read from the WWP-DJRC statement: “The right of accessibility during the COVID pandemic.” (Full statement available at workers.org.)

Attending the rally was Michael Howard, who identifies as an African American male with a mild intellectual developmental disability and lives independently in Queens under Well Life Network. An active participant in Disabled in Action, ADAPT and other disability groups, he related to the Penn Station crowd that he saw friends present from the DJRC 2nd Sunday Dialogue virtual meetings. He commented on the need to stop the big wealthy corporations’ attacks on poor and working-class people, and said the system is designed to fail folks with disabilities.

Readers can meet and connect to Mike, other organizers and members of the Disability Justice and Rights Caucus of Workers World Party at the next 2nd Sunday Dialogue, Dec. 12, 6 p.m. EST. Link and call numbers are available from [email protected]

Yudelovich is a WWP-DJRC activist with neurodivergent and auditory disabilities.