Chanting “We are one!” striking Alabama coal miners – who’d come by busloads to town – rallied and marched here Nov. 4. Joined by supporters, they protested outside the midtown offices of the BlackRock investment firm, the biggest shareholder in the miners’ employer, Warrior Met Coal. Several miners were arrested for blocking traffic in front of BlackRock, including United Mine Workers International President Cecil E. Roberts. 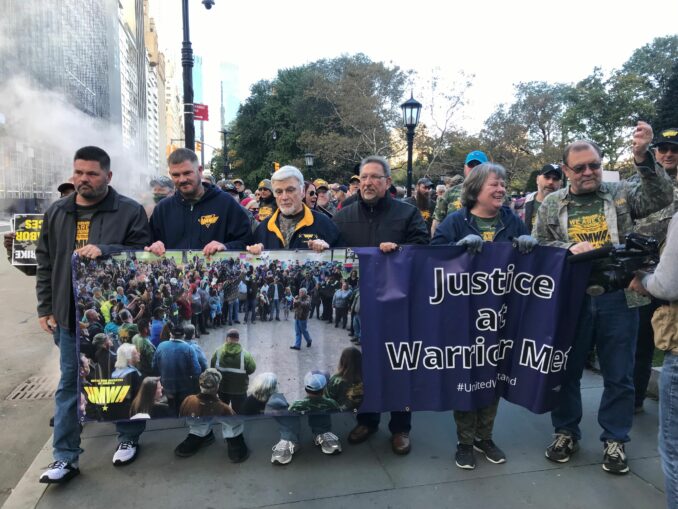 As reported in previous Workers World articles, the 1,100 Brookwood, Ala., miners have been on strike since April 1 for better working conditions, pay and benefits. These members of United Mine Workers (UMWA) Locals 2245, 2368 and 2397 say the big hedge funds that provide financial backing to Warrior Met are blocking progress toward a fair contract. The coal company is “the leading dedicated U.S.-based producer and exporter of high quality metallurgical (‘met’) coal for the global steel industry.” (Business Wire, Feb. 24)

In 2016, the unionized miners agreed to bone-deep cuts in wages, health benefits and other issues in order to save the parent coal company from bankruptcy. Warrior Met promised to reverse the cuts as it returned to solvency.

The company just reported its best quarter since the beginning of the COVID-19 pandemic, with a net income of $38.4 million for the 2021 third quarter. It has reversed a 2020 net loss of $14.4 million – and yet still refuses to bargain in good faith with the miners. Warrior Met’s best offer so far included a union-breaking clause to allow the company to refuse to rehire union strike leaders and to favor scab workers as replacements. (al.com, Nov. 2)

The Manhattan protest came after Warrior Met found an Alabama judge willing to issue a restraining order on Oct. 27 prohibiting picketing or any other activity by any union members – or by any family members or supporters – within 300 yards of its 12 Tuscaloosa County, Ala., locations.

Mine workers at the New York march were fired up over the anti-union court action and more determined than ever to bring the coal profiteer back to the bargaining table.

Rally speakers lambasted Warrior Met and the Alabama courts, sheriffs and governor for allowing scabs to cross the picket line while unconstitutionally restraining striking miners from fighting for a contract. Some linked the Warrior Met fight with other worker struggles.

Leonard Aguilar, secretary-treasurer of the Texas AFL-CIO, said, “I’m from the South, so I’m here to support my brothers and sisters from the South – whether at Nabisco or Kellogg’s or the mine workers.”

UNITE HERE Local 35 President Bob Proto, representing maintenance and service workers at Yale University, said, “We’re here to tell private equity firms like BlackRock that the days of being ‘private’ are over. We’ll shine a light on your profits and follow the money. We’re in this fight all the way, it will escalate, and you will feel it.”

AFL-CIO President Liz Shuler sent a message pledging the national federation’s support: “We will not let the police or the courts or the governor bend the law against union rights.”

AFA President Sara Nelson said, “Past mine worker struggles made sure we even have a labor movement. If you are thinking, ‘Isn’t it strange that flight attendants would be here supporting the miners,’ well that’s union-buster talk. Because whether you work 2,000 feet underground or 30,000 feet in the air, it’s unions that make sure our air is safe to breathe.”

“Dr. Martin Luther King Jr. talked about the right to protest for what is right,” said UMWA President Roberts. “The injunction says we can’t picket or talk or even gather near Warrior Met. But we need freedom of speech, freedom of assembly – and we need to drive the scabs back into the hole they crawled out of and get back to the table to negotiate.”