Nov. 7 − Some 2,500 Amazon workers went out on strike in Germany for one to three days starting Nov. 1 to press demands for an increase in wages. By Nov. 2 seven of Amazon’s 17 warehouses–or “fulfillment centers” as Amazon management calls them–were affected by the strike. The workers are members of Verdi, the country’s ​​second largest trade union. 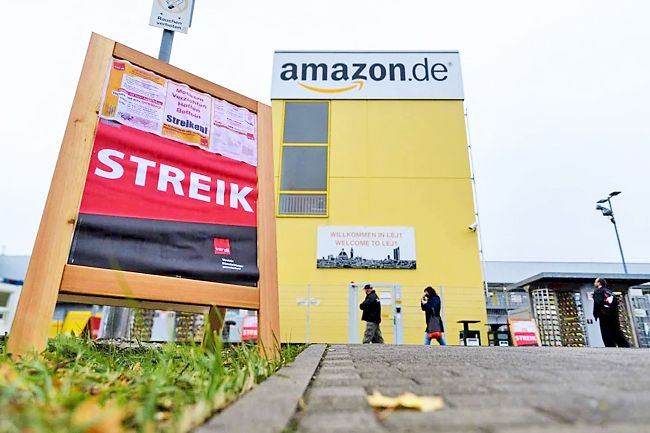 Orhan Akman, Verdi’s national group leader for the retail and mail-order sector, said: “It is inacceptable that a multinational corporation worth billions earns itself silly and yet refuses to give employees the wage increases that other industry companies pay.” (Junge Welt, Nov. 2)

The strike against Amazon in Germany, like a similar strike in Italy last spring, demonstrates the international character of the class struggle with the mega-company. In the U.S. the Amazon workforce has been attempting to unionize and has an active union election underway at the facility on Staten Island, New York.

In Germany contracts for wages have been set by bargaining by industry. The Verdi service workers union says that Amazon should be counted as being in the retail industry and pay more than the current amount offered to its workers. Amazon management claims the company is part of the logistics industry, and that the 12 euros (about $14) per hour they offer is correct.

Of course it is self-serving for Amazon to define themselves as part of logistics, since the prevailing wages, set by agreement, are lower there than in retail. Germany is second only to the United States in the amount of sale income for Amazon.

For  the last eight years, Verdi has held job actions at Amazon, concentrating on the period near the December holidays, when the company is busiest. These actions are expected again this year.

Verdi demands that Amazon “immediately” pass on to Amazon employees the pay increases from the collective wage agreements reached in the retail and mail order sector in recent weeks.

The arrogant attitude of the company, which claims its pay is excellent, is exactly what infuriates the thousands of workers, said Ronny Streich, the Verdi union secretary in Leipzig, in an interview with Junge Welt. “We have a stable activist group here and a workforce that has become more willing to strike in recent years. … We can’t go any lower” in worker demands.

And not just in Germany.