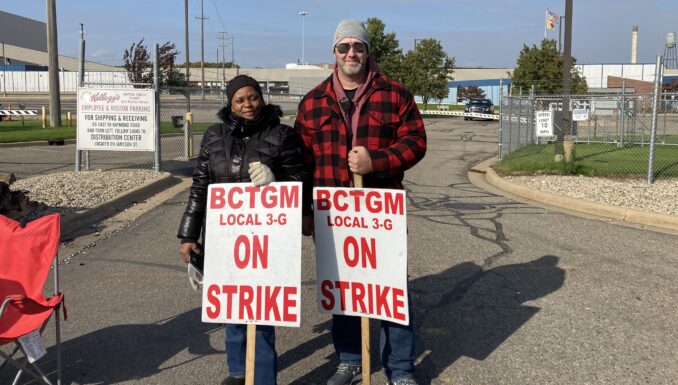 The members of Bakery, Confectionery, Tobacco Workers and Grain Millers (BCTGM) in Michigan, Nebraska, Pennsylvania and Tennessee are now in their second month on strike. On Nov. 4, union negotiators announced they had turned down the company’s latest offer, stating: “The company’s last, best and final offer does not achieve what our members are asking for: a predictable pathway to fully vested, fully benefitted employment for all employees with no concessions.” Kellogg’s has threatened to cut hundreds of jobs and move work to Mexico. (BCTGM.org)

Workers World spoke with members of BCTGM Local 3-G outside the Kellogg’s plant in Battle Creek. They explained that the main goal of the strike is not higher wages but an end to the divisive, unequal two-tier pay scale that pays lower seniority workers less for the exact same work performed by those with higher seniority. Their strike signs call for “equal pay and benefits” and accuse Kellogg’s of putting “profits over people.”

The strike has been effective; not one union member has crossed the picket line. Supervisors and temporary agency employees working on the line have not been able to run production. Truckers leaving the plant tell strikers their loads are empty. Unsafe conditions created by the bosses’ inexperience have led to five injuries so far.

The Tony the Tiger statue outside the plant was dwarfed by a huge inflatable “Scabby the Rat” symbolizing Kellogg’s greed. Over the years Scabby has made his presence known at union pickets across the country. This Scabby was provided by Laborers’ International Union of North America Local 355 – an example of the widespread community and labor solidarity in this town known as “Cereal City.”

With large amounts of food being donated, “We’re not going hungry,” a striker explained. They’ve received “a lot of love.” Drivers at one trucking company, who know the Kellogg’s workers personally, are refusing to make daily pickups and deliveries – even though they don’t have a union.

While BCTGM has not called an official boycott of Kellogg’s, many consumers have stopped buying “scab cereal.” 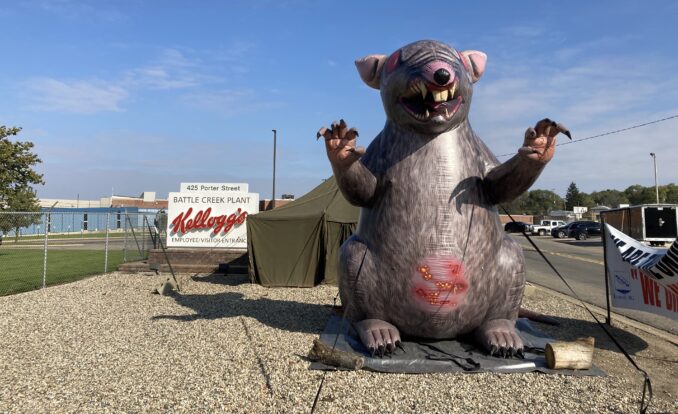 Workers striking a blow at capital

The Kellogg’s workers are not the only ones on strike. The 14 plants of heavy equipment manufacturer John Deere remain strikebound after workers voted down a second contract proposal Nov. 2.

They felt a number of issues were still not addressed, including pay losses they have felt due to supply chain issues outside their control. Before the frequent parts shortages there was a “KIP” bonus paid if workers met a certain quota, but now making quota is impossible and the company refuses to adjust the formula.

Like Kellogg’s, John Deere does not want to end two-tier pay, in place since 1997. “Post ’97” workers are organized on social media and are tired of working for less than what older workers – in some cases their parents – made several contracts ago.

Meanwhile 1,500 nurses in Huntington, W. Va., and 3,000 graduate student workers at Columbia University in New York City, who have spent four years fighting for their first contract, have joined the strike upsurge. Striketober has passed and Strikevember has begun – much to the dismay of the capitalist class.

If the Kellogg’s strikers, represented by a small union with 65,000 members  countrywide, are able to get rid of two-tier pay, it will be a huge victory with ramifications for the whole labor movement.

Which side are you on? We’re on the workers’ side!