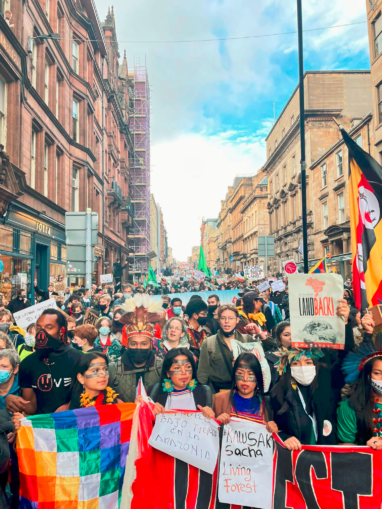 Midway through the COP26 U.N. climate summit in Glasgow, Scotland, over 100,000 youth marched Nov. 5 to express consensus that the conference was set up to fail. Chants included “Cop-out” and “Do something! Now!”

Protesters condemned world leaders for failing to act and having policy conversations without measures to back them up. Young activists say the time to act on climate change is now. Many could be retirees by the time COP26 caps on carbon emissions are achieved, if these goals are put off until 2050 or later.

The median age of government representatives in COP26 discussions was over 60. The majority are men. Most of the protesters are too young to vote. Predominantly young and female, they say COP26 is just more “blah, blah, blah!”

Some protest spokespeople rightly pointed to capitalism and white supremacy as the root causes preventing decisive steps to mitigate the climate crisis.

The 26th Conference of Parties (COP26) follows 25 previous COPs with no measurable impact on greenhouse gas emissions. Around half of climate-destroying greenhouse gas (GHG) emissions were released after COP1 was held in 1995.

Time for more than talk

World leaders have talked about addressing “climate change” long before most of today’s youthful protesters were born. By and large COP gatherings have been all talk, with no substantive action, including the Kyoto Protocol in December 1997 and the Paris Agreement in December 2015.

The U.S. never ratified the Kyoto Protocol, despite winning an exemption from fully reporting the U.S. military’s impact on GHG. That military is the world’s largest institutional consumer of crude oil. The U.S. army alone emitted over 70 million metric tons of carbon dioxide (CO2) equivalent in 2014. This figure omits emissions from hundreds of military bases, equipment and vehicles abroad.

The December 2015 Paris Accord removed the automatic exemption for excluding military emissions, leaving it to individual countries to report these. In 2017, President Donald Trump withdrew the U.S. from the Paris Agreement.

There is little reason to believe that any agreement coming out of COP26 will be met with better compliance. The Biden administration’s Build Back Better plan has been held up by West Virginia conservative Democrat Senator Joe Manchin who represents coal and gas industries opposing key climate measures included in that package.

Manchin is not alone. Many Congressional millionaires are beholden to oil and gas companies. They protect energy companies despite revelations for decades that these corporations suppressed warnings from their own scientists about the damaging impact of fossil fuels on the climate. Carbon trioxide (CO3) emissions from fracking for natural gas have magnified the crisis. The Guardian’s major expose on this appeared earlier in 2021. (tinyurl.com/vzwnmjav)

Imperialist corporations in the U.S., Western Europe and Japan have produced the majority of GHG emissions, yet Indigenous peoples bear the brunt with the destruction of forest and coastal ecosystems. Facing rising sea levels, the very survival of island nations is on the line.

While the youth demonstrated, more than 20 scientists, chained together by their necks, blocked a major Glasgow bridge. Several faced arrests to dramatize their message that civil disobedience is the only option left to bring attention to the extremity of the climate crisis.

Workers World believes another option is possible – a systemic change to replace global capitalism through socialist revolution. The youth are right. The time is long past for non-binding pledges and empty promises. The time for change is now.