Two high-profile murder trials are taking place simultaneously in the U.S. – one in the Deep South and the other in the Midwest. Despite the obvious distance in miles, both trials have two main political themes in common: The first is the prevalence of white supremacy and the second is the Black Lives Matter struggle.  These two important societal issues loom large over the individuals on trial. 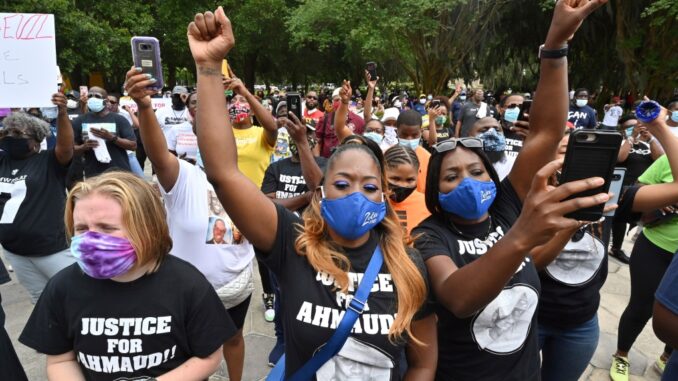 The first trial involves three white men – two who had openly voiced Klan-like opinions – who are accused of fatally shooting Ahmaud Arbery, the 25-year-old son of African immigrants, on Feb. 23, 2020. Arbery was jogging in a majority white suburb of Brunswick, Georgia, when he was chased down by a pickup truck driven by Greg McMichael and his son, Travis McMichael. As Arbery tried to defend himself, he was shot three times. William Bryan, who was close by videotaping the incident, has also been charged with murder.

The McMichaels claimed that they shot an unarmed Arbery in “self-defense” because they labeled him a “burglar.”  The fact is that Arbery lived just two miles away from where he tragically lost his life due to the color of his skin.

Before the videotape was made public, two prosecutors for the Brunswick Judicial Circuit and Waycross Judicial Circuit questioned the suspects and then told the police that there was no basis for arresting the three men. Why? The prosecutors claimed that the three racists had the right to make a “citizen’s arrest” of Arbery and that Arbery was a threat to them, not the other way around. And so the police did nothing. This was the beginning of a cover-up and justification of the racial profiling and murder of Arbery – killed for jogging while Black.

This changed once Bryan’s videotape of the shooting went viral in May 2020, just weeks before the videotape was released of the lynching of another Black man, George Floyd, by Minneapolis police. Protests demanding justice for Ahmaud Arbery sprang up not only in Brunswick but all over the country, led by Arbery’s family and Black Lives Matter activists.

If Arbery’s death had not been linked with the Floyd protests, who knows whether the three racists would ever have been arrested, much less gone to trial. Two prosecutors have since recused themselves from any involvement in the trial; they should have been charged with obstruction of justice for allowing these killers to go free.

The Arbery trial has already stirred up a controversy before the opening arguments have been given, based on jury selection that has taken place. The city of Brunswick is 55% Black, and is part of Glynn County, which is 27% Black. But only one out of the 12 jurors selected for the Arbery trial is Black, all the rest being white, including four alternates. That means the one Black person makes up six percent of the jury – by no means an adequate representation of the local population.

The Minneapolis jury in the trial of Derek Chauvin, convicted of killing Floyd, was composed of half people of color and half white. The city is 20% African American.

In the Arbery trial, Judge Timothy Walmsley, who is white, allowed defense attorneys to get away with obvious bias against prospective Black jurors but did not block white jurors. He indicated he thought that no juror could be impartial in a case where “race” is involved; his rulings indicated that he thought no Black person could be trusted to ignore racism.

The Arbery trial is not an isolated situation when it comes to striking Black people and other people of color from criminal cases where Black people are the victims of any form of racism. A 1986 U.S. Supreme Court ruling in Batson v. Kentucky codifies that excluding jurors based on race is unconstitutional. The problem is that there is no way to enforce this ruling.

In fact, the Arbery jury – and juries in almost every state – reflects this racist bias in a systematic manner.  Prosecutors routinely exchange videotapes on tactics to effectively exclude Black jurors.

Stephen Bright, a lawyer who has argued death penalty cases before the Supreme Court, stated, “We still have all-white juries in communities all over the country, many with substantial African American populations, because of peremptory strikes. This peremptory strike issue has been debated for years, and it still allows the exclusion of people in a grossly disproportionate way.”

Benjamin Crump, a prominent Black lawyer who represents the Arbery family, states that a blatant lack of Black jurors in the trial represents “a cynical effort to help these coldblooded killers escape justice.”  (Washington Post, Nov. 4)

In August 2020, Jacob Blake, a young Black father, was shot in the back seven times in front of his children by white police in Kenosha, Wis. (Blake still remains paralyzed from the waist down.) A multinational Black Lives Matter protest took place Aug. 25 in the streets of that city located not far from Milwaukee.

At the protest, a 17-year-old white vigilante, Kyle Rittenhouse, shot and killed two unarmed anti-racist protesters, Joseph Rosenbaum and Anthony Huber, who happened to be white. Minutes before the killings, Kenosha police were caught on camera thanking an armed Rittenhouse, along with others with him, for their presence and providing them water. After the shootings, the police did not question or arrest Rittenhouse – who continued to openly carry the rifle he had killed with –  and allowed him to walk free to threaten other protesters.

Rittenhouse was eventually arrested and charged with two counts of murder and one count of attempted murder of protester Gaige Grosskreutz.

In another example of outrageous bias, Circuit Judge Bruce Schroeder stated in an Oct. 26 pre-trial hearing that those who Rittenhouse killed and wounded could not be characterized by prosecuting attorneys as “victims” or even “alleged victims,” but could be characterized by defense attorneys in their closing arguments as “looters,” “rioters” and “arsonists.”

This raises the question of who is really on trial, the white supremacist Rittenhouse or Rosenbaum and Huber, who will never be able to defend themselves because they are dead? The judge, who is supposed to be impartial, has clearly shown unabashedly whose side he is on before the trial has even begun.

Grosskreutz has filed a lawsuit against the city and Kenosha County stating that police deputized a “band of white nationalist vigilantes.” The complaint cited a remark from one of the police who spoke to Rittenhouse saying, “We appreciate you guys — we really do.”

The lawsuit goes on to say, “These were the words of Kenosha law enforcement officers — words of encouragement, appreciation and thanks, spoken to Kyle Rittenhouse and a band of white nationalist vigilantes on the evening of August 25, 2020.” (Washington Post, Oct. 26)

These two trials dramatically expose once again that white supremacy and racism are not secondary issues in a society split by deepening class divisions. The Black Lives Matter movement is expressed in various forms and must always be defended wherever and whenever racists threaten Black lives – whether going for an early morning run or angrily protesting injustice in the streets.