The following edited article first appeared in Covert Action Magazine on Nov. 3.  (Read the entire article at tinyurl.com/5482rum7.) Nan McCurdy is the editor of NicaNotes. Now working in Mexico, she lived over 30 years in Nicaragua and is currently there for the Nov. 7 elections, along with close to 200 other international observers. 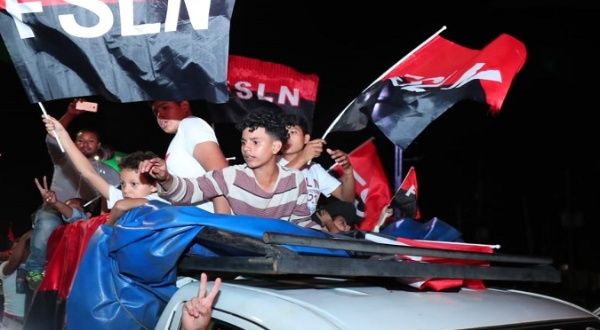 On Nov. 7, thousands of Nicaraguan citizens gathered in Victories Square in Managua to celebrate that the preliminary report from the Supreme Electoral Council on the general election showed that the Sandinista National Liberation Front (FSLN) had obtained 74.99 percent of the valid votes in the electoral process. (Telesur, Nov. 8)  More details to follow.

The U.S. government has not waited for these results. Seeing the enormous support for the FSLN and for the continued presidency of Daniel Ortega as the likely outcome, the U.S. has repeatedly asserted through corporate media and all other possible forums that the Nicaraguan election process was not “free or fair”–stating this even months before the election actually took place.

The likely reason for such a majority vote for the Sandinista Party is that people want the progress their families have experienced since 2007, like universal free health care and education, to continue.  Nicaragua has made the greatest investments in infrastructure, including new modern health facilities and road networks, in the Central American region.

Since 2007, poverty has been cut in half, maternal mortality has dropped by 70%, infant mortality by 61% with a 66% reduction in chronic malnutrition in children six to 12 years old. With a high percentage of small and medium-scale farmers and significant government investment in training and local food-production programs, Nicaragua has achieved 90% food sovereignty.

In the last 14 years potable water access has risen from 65% to 92%; electricity coverage has increased from 54% to 99% and 80% of the energy comes from renewables; in fact, Nicaragua is number three in the world in renewable energy. In gender equality, Nicaragua has gone from 62nd to 5th in the world; and it holds first place in the world for women’s health and survival, women’s educational attainment and women cabinet ministers.

The satisfaction of the population with public services, Nicaragua’s transparency, lack of corruption and good project execution is even recognized by international banks.

U.S. strategy in the 2021 elections is to declare the elections illegitimate even before they take place.

The U.S. has intervened in every election since Nicaragua’s first free and fair election which took place in 1984. That year, the U.S. used the Contra War and the U.S. economic blockade to twist the arm of the population. But when polls showed the Sandinista Party winning by a large margin, they told “their” candidate, Arturo Cruz, to drop out and say he was not participating because the elections were not going to be free and fair.

A United States Agency for International Development (USAID) regime change document was leaked to independent Nicaraguan journalist, William Grigsby, in July of 2020 from the U.S. embassy.

RAIN, or Responsive Assistance in Nicaragua, is a Terms of Reference contract for hiring a company to oversee what it refers to as a “transition” – a word used more than thirty times in the document. It was written in the spring of 2020 and much of the U.S. destabilization activity to try to get the Sandinistas out of power has likely been under this plan:

“…[T]argeted short-term … activities during Nicaragua’s transition that require rapid-response programming support until other funds, mechanisms and actors can be mobilized.”

“RAIN will pursue these activities against a variety of scenarios…

“…Any national election could yield a result accepted by Nicaraguans and the International community.” [recognition that the Sandinistas could win in free and fair elections]

“If the regime remains resilient RAIN … will have the ability to respond … outside of other USAID programming [covertly], to … needs to maintain civil society on track…”

In the case of a Sudden Transition [coup], RAIN will likely require more use of Rapid Response Funds, … with attention to potential for conflict, legitimacy of new government actors and setting up the transition for success.”

Sanctions: another form of war

The U.S. first considered sanctions on Cuba in 1960 when Deputy Assistant Secretary of State Lester Mallory said that the purpose of a blockade on Cuba was to “bring about hunger, desperation and overthrow of the government.”

In the 1980s, in an attempt to overthrow the revolutionary Sandinista government that had taken power in 1979, the U.S. funded counter-revolutionary forces against Nicaragua and declared an embargo on all trade with the country.

In 2018, the U.S. passed illegal unilateral coercive measures [sanctions] against Nicaragua. The Nicaragua Investment Conditionality Act (Nica Act) – which passed the House of Representatives with zero opposition by a 435-0 margin – directed the executive branch to “oppose new loans or agreements with Nicaragua through the World Bank, Inter-American Development Bank and the International Monetary Fund; and directs agencies to create a ‘civil society’ engagement strategy [fund and support opposition groups], among other actions.”

The Nica Act was to punish Nicaragua for not being a subservient colony; it is not based on any wrong-doing. For example, the multilateral lenders only praise Nicaragua for its transparency and efficiency in project execution, going so far as to specifically say it is not corrupt.

The Nica Act reduced multilateral loans, hurting development in Nicaragua as well as impacting healthcare during the pandemic. After damage from two strong hurricanes in November 2020 and Covid-19, some of the institutions have provided loans.

A number of members of the government have been sanctioned as individuals, like Paul Oquist, Minister for National Policies, who has since passed away. Oquist was an internationally recognized expert on climate change and co-chair of the Green Climate Fund in 2018. Born in the U.S., he gave up his U.S. citizenship in the 80s in protest of the Contra War.

The U.S. RENACER Act is a form of coercion to try to get Nicaraguans to vote against the Sandinista government. Nicaraguans know what sanctions mean for their economy. RENACER would make development financing even more difficult to get and could possibly make the economy scream.

The RENACER ACT applies targeted sanctions to card-carrying Sandinista Party members, some 2.1 million people, a third of the population.

Included in the stated U.S. reasons for attacking Nicaragua with RENACER are two laws that Nicaragua passed in October 2020: the Foreign Agents Regulatory Act – similar but not as stringent as the U.S. FARA Law, and the Cybercrimes Law, also not nearly as punitive as U.S. cybercrimes laws. Astounding considering that the U.S. has the same laws!

What will the impact be on Nicaragua’s elections?

The U.S. government has been extremely successful in terms of getting the press, in chorus, to vilify Nicaragua’s Sandinista government for being a “dictatorship.”

It’s been even more successful at keeping all the good news of Nicaragua’s amazing social and economic advances out of the U.S. press. If you only read mainstream sources you would have no idea that Nicaragua is the safest, most secure and highly functional country in the region.

The government of Nicaragua reaffirmed at the United Nations General Assembly that in the Nov. 7 elections it is not the U.S. Empire that will choose but the Nicaraguan people.

During his UN speech, Foreign Minister Denis Moncada reaffirmed Nicaragua’s commitment to continue working for peace, security and tranquility of individuals, families and communities. Statistically, every aspect of life has improved under the Sandinistas and the intention to vote Sandinista has increased monthly in the polls.

It appears that U.S. sanctions, coercion, and disinformation will have little effect on how Nicaraguans vote.