Bulletin – Nov. 9: Workers at three additional Buffalo stores have filed with the National Labor Relations Board for a union election — doubling the number in the area to a total of six. At the initial three stores workers will receive ballots by mail on Dec. 10, pending a NLRB decision on any last minute attempts by Starbucks to delay the vote further. 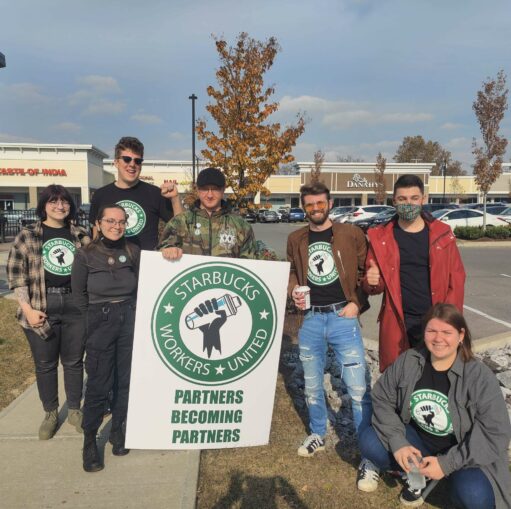 These Buffalo, N.Y., Starbucks workers announced on Nov. 9 that three additional stores have filed for a union election, bringing the total to six stores.

Since Starbucks workers publicly announced a union drive here in October, the workers have faced relentless union busting from the company intent on crushing the union. During the last few months, workers have endured threats, harassment, intimidation, surveillance and even the closing down of stores that had union support for extended periods of time.

The company has also tried to isolate the workers as much as possible, by changing store hours outside of workers’ availability, forcing people to quit or transfer, and flooding the floor with managers and corporate officials, creating an atmosphere of fear at work.

Starbucks Workers United fired back, announcing Nov. 4 that they are filing charges of unfair labor practices against the company.

Danka Dragic, a two-year employee at Starbucks, told Workers World: “We shouldn’t have to wait until things get as bad as at Amazon or Walmart before we can organize a union.”

The workers know that every worker deserves a union, and Starbucks – a multi-billion dollar corporation that puts a lot of effort into masking its exploitation of workers with a progressive image – has shown that when it comes to union busting, they are no better than Amazon or Walmart.

Union supporters at three of the twenty stores in the Buffalo Starbucks district have filed for a union election, with widespread worker support in other stores. On Oct. 28 the National Labor Relations Board ruled that voting-by-mail will take place for those three stores from Nov. 10 to Dec. 8.

In response, Starbucks adapted its anti-union strategy, from captive audience meetings that instructed workers to vote no to pulling workers off the floor during their shift to scare them away from the union by one-on-one conversations. The company is adding employees from other stores to the list of eligible voters in stores that filed, in a blatant attempt to stack the vote against union supporters.

In addition to intimidation, Starbucks has tried to buy the support of workers. Since its founding in 1971, Starbucks has never given seniority pay, but has decided now to hand out that extra pay – during a mounting union drive.

Only under the pressure of organizing workers did Starbucks give in about seniority pay. This is just a small glimpse of what workers can gain by organizing together in their shared class interests.

On Nov. 6, Starbucks hosted what they call a “partner event,” featuring former executive chair of the company, Howard Schultz. During this event, billionaire Schultz lectured workers about the need to be “humble.”

Then barista and union organizer Gianna Reeve asked Schultz to sign the Fair Election Principles. Workers have asked the company to sign from the beginning of the union drive. Starbucks has refused, and Schultz refused again. Reeve’s request was followed by applause and cheers from many other workers present, who feel that Starbucks has not allowed workers a fair say in the face of the company’s underhanded anti-union tactics.

The mood among workers is that there has to be an end to management intimidation and harassment. Starbucks corporate is using every trick in the book to crush the union and grab profits over the best interests of their workers.

But Starbucks workers are persisting – and continue to inspire other food service workers and workers of all industries to unite together and organize to build power in the workplace.

Workers World Party is in dedicated solidarity with Starbucks Workers United and with workers everywhere in the fight against capitalist exploitation.