The global supply logjam continues to receive attention from the corporate media, the most influential CEOs and politicians. They claim to be concerned that shortages of goods could lead to higher prices, drive inflation and negatively impact workers, who are already economically challenged by historically low wages. 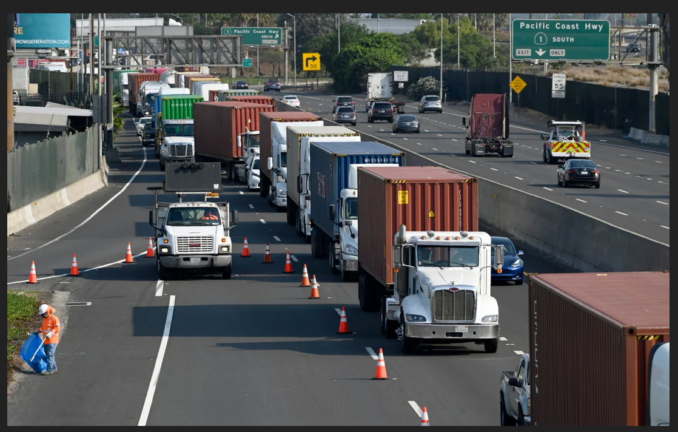 Trucks wait to enter the Port of Long Beach to pick up loads, October 2021.

On Oct. 14, President Joe Biden called for two key California ports — Los Angeles and Long Beach — to be opened 24/7 to unload containers from the growing number of cargo ships waiting to dock. The ink wasn’t dry on Biden’s press release before critics raised that unloaded goods are already waiting for trucks — due to a shortage of available drivers.

Truck drivers say they can only carry the contents of one massive cargo container per vehicle, and the warehouses they bring them to are already full. In the warehouses, the bosses are driving workers to work faster and faster, making the work dangerous and exhausting. These warehouse workers, including millions at Amazon’s giant complexes, are organizing against oppressive working conditions.

If the bottleneck at the port is resolved, this just pushes the bottleneck further down the supply chain and in the process exposes the contradictory relations between bosses and workers at the crux of the problem.

The global supply chain involves a massive complex of companies and the 3 to 4 billion workers they exploit. And the COVID-19 pandemic has left millions of workers no longer willing to risk their health and safety in jobs where corporate owners refuse to provide living wages and benefits to address health and safety.

The big capitalists took advantage of the high-tech revolution in the early 1980s and the political changes in the 1990s: counterrevolution in the Soviet Union and China opening its workforce for employment in and exploitation by internationally based industry. (See “High Tech, Low Pay,” by Sam Marcy and “Low Wage Capitalism,” by Fred Goldstein.)

In their drive to maximize profits, multinational corporations began to export apparatuses of production, moving entire factories from country to country to find where they could pay workers the lowest wages. These same corporations forced parts manufacturers to compete against each other to offer the lowest bids.

Retail industries employed “just-in-time” inventories to reduce overhead costs. This strategy allowed the corporations to minimize storing goods — their inventory — in warehouses or parking lots, but required a smooth-flowing delivery of manufactured goods. Faced with the COVID-19 pandemic and impacted by major weather events due to the climate crisis, some pro-capitalist analysts now say increasing inventories to “just-in-case” levels might be more practical.

All these cost-cutting measures were employed against a background of recurring global overproduction crisis, each time leaving fewer workers employed, while the income gap between corporate bosses and workers grew exponentially. Long before COVID-19 was first reported in early 2020, the capitalist system was in crisis. The pandemic has exposed these inequities by creating the first bottleneck in delivering inventory, at the ports.

The capitalists claim they can’t find enough people to take available jobs in industries that transport goods. But in an Oct. 14 interview with Work Week’s Steve Zeltzer, Trent Willis, president of Local 10 of the International Longshore and Warehouse Union (ILWU) representing California Bay Area port workers, stated: “This is a struggle for the working class right now. We first have to challenge the narrative of employers who say they can’t find enough people to take jobs, implying that workers are lazy.

“We all know profits for the wealthy class have gone up dramatically over the years, while wages for workers have not kept up. The minimum wage has been the same for multiple years. People can’t afford to live in this country without making decent wages and benefits. The COVID-19 pandemic exposed this, along with other conditions that impact working people.”

Willis challenged claims that cargo ships were unable to unload on the West Coast, noting that there is no backlog of carrier ships in the Port of Oakland (which already has a 24/7 policy). He asked why ocean carriers are refusing to use the ninth largest port — San Francisco/Oakland — in the U.S. to unload, while 70 to 80 ships back up in the ports of Los Angeles and Long Beach.

Willis said: “The supply chain backup on the West Coast is inaccurately reported on major news networks. There is no backup in the Bay Area, which includes ports in San Francisco and Oakland. But for some reason, the ocean carriers have decided to back up ships in the Los Angeles area, which handles 40% of West Coast docks.”

Bay Area gentrification, including the effort to privatize the Howard Terminal section of the Port of Oakland to build a new stadium for the Oakland A’s baseball team adds to the problem. Willis noted: “Longshore workers cannot afford to live in San Francisco and Oakland. Many have to drive hundreds of miles [cumulatively] from Sacramento to go to work, while million-dollar condos are being built in Oakland and San Francisco.”

Ramon Ponce de Leon, president of ILWU Local 13, representing 5,000 longshore workers, noted in a Labor Day interview with Margaret Prescod, KPFK, that over 700 members had contracted COVID 19, and at least 13 died. In addition to early problems securing enough PPEs to protect union members, he cited the increase in e-commerce as a major challenge: “People have doubled their buying power by e-commerce. But nobody was ready for the congestion it created.”

It should be noted that when Biden responded to the backlog by making an agreement with the Port of Los Angeles to become a 24/7 operation, he overstepped already existing contracts between ILWU locals and the port bosses.

Moving cargo containers from the ports to retail warehouses relies on the labor of nearly 2 million truck drivers in the U.S. Chris Spear, President and CEO of the American Trucking Associations, told CNN that the industry faces a record high labor shortage of 80,000 drivers. Even before the COVID-19 pandemic, the industry claimed to face a shortage of 61,500 drivers. Spear said the industry will need to train a million new drivers over the next 10 years. (CNN, Oct. 19)

What big-boss Spears failed to address is why more workers are not seeking employment in the industry, which faces a driver shortage for the fourth year in a row. But is there truly a shortage of skilled drivers? And if so, why?

Prior to 1980, the average unionized truck driver earned over $96,000 in today’s dollars, and they produced more than that in value that the owners took as profits. In 1974, membership in the Teamsters union representing truck drivers was over 2 million. Today there are fewer than 75,000 unionized drivers. The median salary for drivers is around $45,260, with 40% lacking health insurance coverage.

In 1980, under pressure from banks and corporations, Democratic President Jimmy Carter signed the Motor Carrier Act, which began the process of deregulating the trucking industry, opening it up to cutthroat competition. The Act also changed regulations implemented in 1935 that had set the price to move a product from one city to another. The MCA allowed anyone to haul any goods, to any place, for any price. (tinyurl.com/ttveeyys)

Today, the trucking industry subjects drivers to unsafe and less-than-desirable working conditions, including 70-hour work weeks, and pays them increasingly reduced wages. This situation has been exacerbated by the COVID-19 pandemic. Many drivers are leaving the industry in search of better options. This is a reality, whether a worker is driving a commercial truck or a school bus — another sector facing severe shortages.

Boston School Bus Drivers in the 1,000-strong Steelworkers Local 8751 are demanding justice for drivers and challenging the myth of a “national shortage of workers who would like to drive good-paying, safe, school bus jobs.” Union leader Steve Gillis told Workers World: “There is a gross national shortage of livable wages, benefits, health and safety, and respect for school transportation workers, caused by greedy corporations and their governments!

“Workers are striking for their rights across the country in unprecedented numbers! We must demonstrate our unity and solidarity, speaking in one voice, letting the company and city know that if we don’t get our justice at the negotiating table, we will get it on the picket line.”

For the first time in years, workers are demanding better working conditions and higher wages — and refusing to work until they get them. The global supply chain crisis is showing the power that the international working class has to bring the capitalist system to a halt, by stopping all production and thus all profits.

The bosses and bankers frame the current crisis as a “labor shortage,” while they continue to engage in casino capitalism — manipulating stock prices and futures to maximize their profits. And they take every effort to prevent unionization that would improve workers’ wages and job conditions. But without cargo ship workers, dock workers, truck drivers, school bus drivers and warehouse workers, nothing moves — that’s the working class’ bottom line.