Apache Stronghold activists rallied in San Francisco Oct. 21, the day before the federal 9th Circuit Court of Appeals heard arguments by grassroots Apache activists, legal representatives and allies against the total destruction of the Apache peoples’ most sacred site, about 60 miles east of Phoenix, Ariz. A 12-day spiritual caravan of Apache Stronghold activists and environmentalists journeyed from Arizona to San Francisco for the hearing, in the latest chapter of the 17-year battle to save Oak Flat, the historic Apache Stronghold, Chí’chil Biłdagoteel. Oak Flat is threatened with destruction by Resolution Copper — owned by notorious mining barons Rio Tinto and BHP — and exploitation for copper mining and being turned into a 1,000-foot-deep, two-mile-long crater. (azcentral.com, Oct. 23) 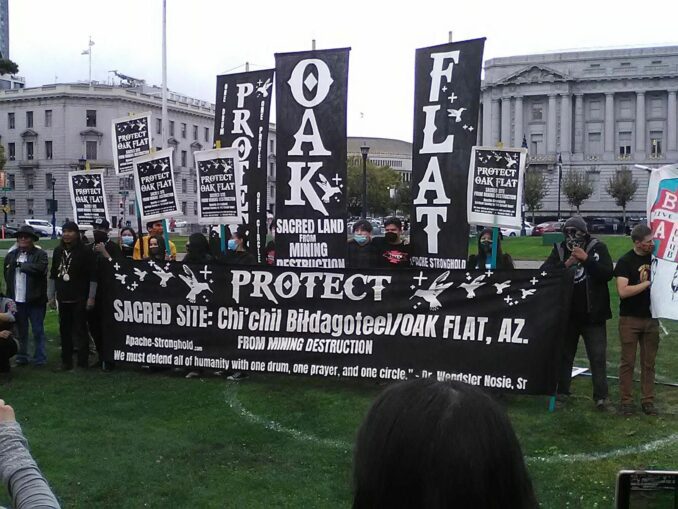 Arguments in the Oct. 22 hearing were made in defense of Apache First Amendment Rights of religious exercise. Resolution Copper’s plans would, according to their own figures, use an amount of water equivalent to that required by a city of 140,000 people. And their plans to dump mining tailings behind the dam at Skunk Camp, Ariz., threaten the Gila River with billions of gallons of toxic sludge. The U.S. Forest Service has withdrawn its Jan. 15 environmental impact statement, which was filed under the previous administration. The 22-acre site is part of the Tonto National Forest.