The Korean Confederation of Trade Unions, which has 1.1 million members, called a one-day general strike on Oct. 20. Over a half a million workers stayed home, and tens of thousands demonstrated. About 1,000 delivery workers turned off their apps and joined the strike. 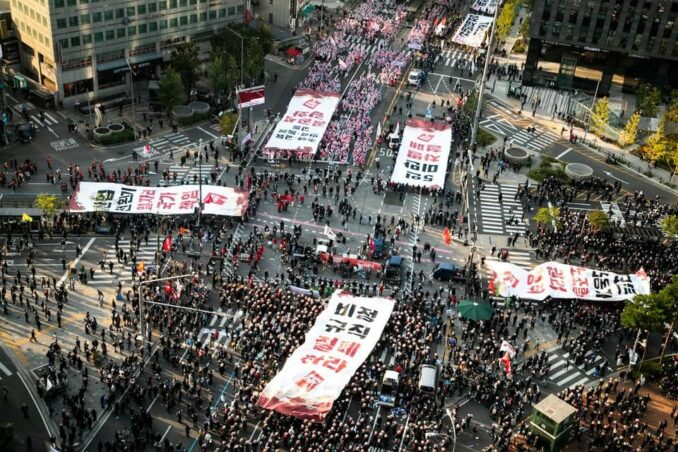 South Korean workers took a real risk to come out by the thousands on the streets of 13 cities to say that they, like the workers in the hugely popular and grim Netflix series “Squid Game,” are struggling to make a living and pay their crushing debts. The series was inspired by the 2009 Ssangyong auto worker strike, which was ended after 77 days by a deadly police attack, followed by crushing state reprisals against the workers. (tinyurl.com/4yh3w64c)

The KCTU said in a statement that during the strike, “About 80 youth union members dressed up in costumes that parody the ‘Squid Game,’ which bitterly satirizes the bare face of our society.” A group of militant KCTU youth led the march, beating drums, some with slogans painted on their vests reading “Inequality Out” and “Safe Youth Employment, Quality Youth Employment,” according to videos posted on the KCTU’s Facebook page.

The storyline of the “Squid Game,” seen in 142 million households worldwide since it first aired in September, emphasizes the desperate life of Korean workers under capitalism in the southern half of the peninsula and dramatizes their individual attempts to win survival through competition to the death in different games.

The KCTU strike demonstrated instead that real-life survival for workers under capitalism depends on their organized and unbending solidarity.

According to laws restricting social gatherings in the capital of Seoul and surrounding areas, only one person at a time can demonstrate. At the Oct. 20 strike, the KCTU brought out more than 20,000 militants, who observed social distancing, wore masks and were randomly checked for fever.

President Moon Jae-in brought in more than 12,000 extra cops to Seoul and set up bus barricades to prevent people from gathering at Gwanghwamun Plaza, where most rallies take place.

Even before the demonstration, KCTU President Yang Kyung-soo and at least 30 other union organizers were arrested. Yang is the 13th consecutive KTCU president to be jailed since the federation was unbanned by the state in 1997.

The KTCU remains intransigent in the face of state repression. The union is aiming at an all-people’s mobilization in January 2022 that would reach out to South Korea’s urban poor and farmers.

Demands of the general strike

One demand of the strike highlighted by the KCTU on its Facebook page was the “expansion of labor law for all workers and the abolition of precarious work.” While contingent workers, categorized as “irregular, part-time, or temporary,” make up 36.1% of the labor force in the country as of August, they have few benefits.

The KCTU demanded that in times of economic crisis, when the economy is going through transitions, changes to working conditions should be implemented “based on strong voices of workers,” with guaranteed employment during times of crisis.

Strike demands included calls for “stronger public services and bigger responsibility of state for jobs and care” both for children and elders.

The conditions of workers so brutally depicted in the Netflix series have resonated with workers throughout the world. What South Korean workers face today comes after more than 70 years of capitalist development under U.S. military and financial hegemony.

The threats and damages created by U.S. imperialist machinations in the world economy produced this fictional series so pain-filled, brutal and disturbing that many viewers report it is almost impossible to watch.

But worker organizing can break through the very real horrors of capitalist life.

Given the responsibility of the U.S. in creating the long and violent history of suppression of workers in South Korea, solidarity from workers in the U.S. with the KCTU and future actions are especially crucial in changing the narrative of history.

That so many other oppressed areas of the world have felt the lash of U.S. domination increases the need for U.S. workers to organize for international working-class solidarity.