The National Football League is the oldest professional sports league in the U.S. Its owners are among the most reactionary. Founded in 1920, the NFL did not draft its first African-American player, George Taliaferro, until 1949. The singing of the national anthem before every NFL game, coupled with pro-military displays, became a tradition starting in 1941 during World War II. 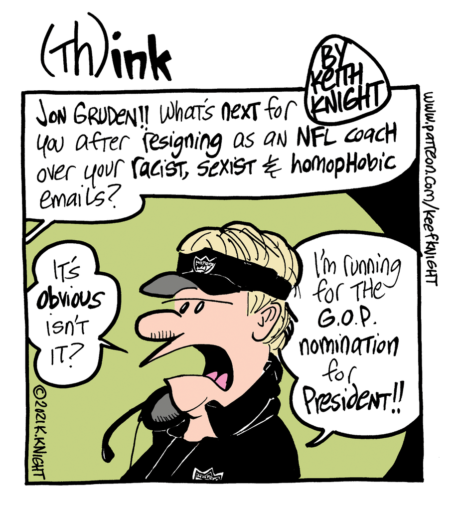 Now, even though over 57 percent of NFL players are Black, there has never been a Black NFL owner. There are currently only three Black head coaches in 32 teams. The first Black quarterback to play in the NFL was Marlin Briscoe in 1968.  And in 1997, Amy Trask became the first woman CEO of an NFL team.

Given the white male patriotism-dominated culture of the NFL for over a century, it should come as no surprise that Las Vegas Raiders head coach and former ESPN Monday Night Football analyst Jon Gruden had written such vile emails. He was forced to resign after the emails were made public Oct. 11.  Those emails included a racist stereotype to describe the lips of the Black executive director of the NFL Players Association, DeMaurice Smith. Gruden used misogynistic and homophobic slurs disparaging NFL Commissioner Roger Goodell for welcoming the first openly gay player, Michael Sam, into the NFL.

Gruden attacked the hiring of women referees for NFL games and Black players like Eric Reid, who followed the lead of Colin Kaepernick by taking a knee to protest police brutality during the playing of the national anthem. Gruden denigrated efforts to protect players from injuries, especially permanent brain-damaging concussions.

Most of these emails were sent to Bruce Allen, former president of the Washington Football Team, which came under fire for years for its now-discarded racist name and mascot that degraded Indigenous peoples and its sexist abuse of women employees, including team cheerleaders.

In his short resignation message, Gruden said that he didn’t want to be a “distraction.” But this development has had an opposite effect, creating a firestorm of controversy. Many of Gruden’s critics, including DeMaurice Smith, are demanding that the hundreds of thousands of emails from the past decade or more be released to unearth this “good ol’ boys club” of mainly white billionaire owners and corporate CEOs who share the same bigoted views as Gruden.

This is another argument for making the top echelons of the NFL more inclusive of people of color, women, gender-oppressed and LGBTQ+ people. There is a need to raise social consciousness and build solidarity with players, who risk injury and shortened careers to make super-profits for team owners.