Over 20 rank-and-file autoworkers spoke on a webcast Oct. 7, challenging the corruption, lack of union democracy and the “partnership” with corporations perpetuated for decades by the International Executive Board of the United Auto Workers. The multinational, multigendered and multigenerational group of unionists advocated for direct elections of International officers — popularly known as “one member, one vote” — in opposition to the current system of election by delegates to the union’s quadrennial conventions. 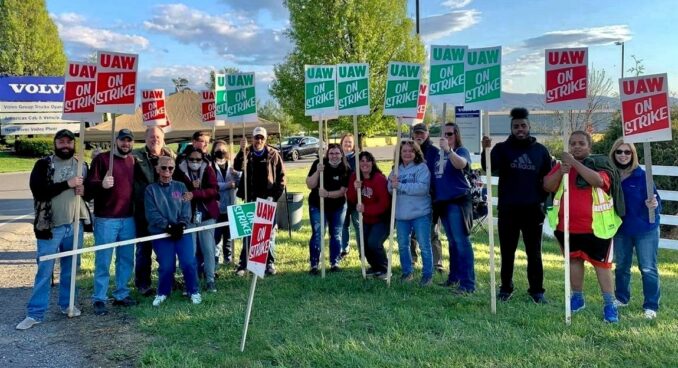 Striking Volvo workers rejected several contracts proposed by the UAW leadership earlier this year. In a second vote on the final concessionary contract, members ratified it by a slim margin and returned to work in July. Credit: UAW Local 2069.

Speakers gave concrete examples of convention practices intended to stifle opposition to the Administration Caucus, which has completely dominated IEB elections for over 70 years.

The webcast was organized by the federal monitor assigned to oversee the UAW as part of a consent decree, agreed to by the union and the U.S. government after a federal investigation uncovered widespread union corruption. Another part of the consent decree was to allow every member to vote in a referendum to decide whether to keep the delegate voting system or go to the direct election system. Mail ballots will be sent to members beginning Oct. 19.

Many of the panelists are members of the Unite All Workers for Democracy caucus, which has stepped up its grassroots campaign for one member, one vote. Every day, UAWD volunteers are busy phone banking, text banking, leafletting and holding organizing meetings to make sure members understand the referendum and return their ballot.

​​A few Administration Caucus supporters presented on the webcast to argue for retaining the current system of IEB elections. Their main point was to raise the specter of so-called “dark money” — that IEB candidates might be funded by shadowy corporate sources. However, as speakers pointed out, it was the now-disgraced IEB officers who took corporate money, specifically bribes from FCA (formerly Chrysler, now Stellantis) intended to influence contract negotiations to the detriment of plant workers.

Speakers represented a broad cross section of workers under the umbrella of the UAW: General Motors, Ford, Stellantis, auto repair and academic and legal services workers.

Andrew Bergman, member of Harvard Grad Students Union UAW Local 5118 — which may soon be striking the university — and member of the UAWD steering committee, said that winning direct elections was “about social justice. It’s about organizing the unorganized, and most importantly it’s about our members’ material conditions by getting stronger contracts.”

Eric Truss of Local 600, with 30,000 members in 48 units including the Ford Rouge complex, spoke for Autoworkers Caravan. AWC drove to Washington, D.C., in 2008 to lobby against concessions in the lead-up to the 2009 General Motors and Chrysler bankruptcies. Referring to a 2014 UAW Convention resolution, Truss asked, “Why would you ask for a raise in our union dues, when you couldn’t even get a raise in our contracts for eight years.”

“We have to fight off the disease of corruption,” said Roberta Gainer, member of Local 774 at GM Powertrain near Buffalo, N.Y. Tim Thomas, who identified as “a revolutionary member” of Local 551 at Ford’s Chicago assembly plant, said the UAW “is too male; it is too stale, and it has completely failed all of us.”

Tim Doane, GM worker and member of Local 31, criticized the Administration Caucus for allowing two-tier contracts. “I’ve been working for almost 10 years. I’m still not at full pay . . . I’m helping make profits every time I punch in,” he pointed out.

Zachary Valdez, shop steward for Local 2110 at Columbia University, closed the panel with an appeal: “This is our chance. Are you going to let this historic moment pass you by?”

Soon, the rank and file may indeed make history and reroute the union back in the direction of class-struggle unionism.