Boston Mayor Kim Janey proclaimed Oct. 6 that the second Monday of October every year would be Indigenous Peoples Day. The document says this commemoration will be “‘in lieu of’ Columbus Day … and renounces the racist and colonial history of Boston and its impact on Indigenous peoples.”

This was a victory for Native people, considering that the European invasion, theft of their land and culture, denial of all rights, torture and genocide, began in what is now the state of Massachusetts and continued there for years.Then on Oct. 8, President Joe Biden proclaimed a federal Indigenous Peoples Day and acknowledged the “wrong and atrocities that many European explorers inflicted on Tribal nations and Indigenous communities.” 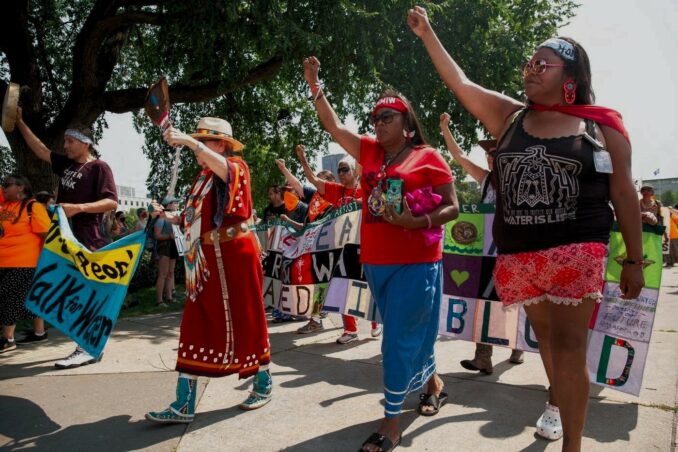 These pronouncements came about due to the unified militant struggles by Indigenous peoples and their allies, which have intensified in the last five years.

The movement for recognition of Oct. 12 as Indigenous Peoples Day began in Berkeley, Calif., following a huge march in San Francisco, on Oct. 10, 1992, protesting the celebration of conquistador and genocidal murderer Christopher Columbus’ arrival 500 years earlier. Since then, at least 130 cities and towns and 11 states have dumped the holiday honoring the genocidal conqueror and now revere Indigenous people, their heritage and culture on that day.

Thousands of people from around the world traveled to join in solidarity with the Standing Rock Sioux Tribe and other Native nations to stop the construction of the Dakota Access Pipeline, starting in 2016.

Protests, including civil disobedience, led by Indigenous organizers have been joined by environmentalists and other allies against the rerouting and expansion of Enbridge Line 3, which brings tar sands oil from Alberta, Canada, to Superior, Wisc. In the U.S., this dirty fuel travels across the ancient wild rice beds in Anishinaabe lands in Minnesota, threatening many waterways.

Indigenous activists participated in the courageous Black Lives Matter protests in Minneapolis and elsewhere decrying the police murder of George Floyd. BLM demonstrators have joined Native peoples’ struggles; the Chicago BLM had a delegation at Standing Rock. Unity and allyship have grown between these movements and strengthened their struggles against their common enemy: white supremacy.

Workers World has continually supported the righteous struggles of Native peoples on the streets and in our newspaper. WW joins Indigenous communities to demand: Drop ‘Columbus Day’ as a federal holiday! Commemorate Indigenous Peoples Day in every city, town and state! Down with white supremacy!

Workers World depends on your help. The WW Supporter Program was founded 44 years ago to help build this revolutionary socialist paper. Since the early 1990s, the fund has supported the workers.org website, where WW articles are posted daily and the PDF file of the weekly issue is displayed. The newspaper is currently printed and mailed out once a month.

For annual donations of $60, $120 or $300 or more, members receive a year’s subscription, letters about timely issues and one, two or three free subscriptions, respectively, to give to friends. Supporters can receive the book, “What road to socialism?” (Notify us.) Or read it for free at workers.org/books.

Write checks, either monthly or once a year, to Workers World. Mail them with your name and address to 147 W. 24th St., 2nd Floor, New York, NY 10011, or sign up to donate online at workers.org.

Thank you for supporting Workers World.