In a major victory for Indigenous people everywhere, Boston Mayor Kim Janey signed an Executive Order declaring the second Monday in October to henceforth be Indigenous Peoples Day. Janey [Boston’s first woman and first Black mayor] signed the order Oct. 6 inside Boston City Hall, the administrative hub of one of the birthplaces of the European settler-colonial project in the Americas. 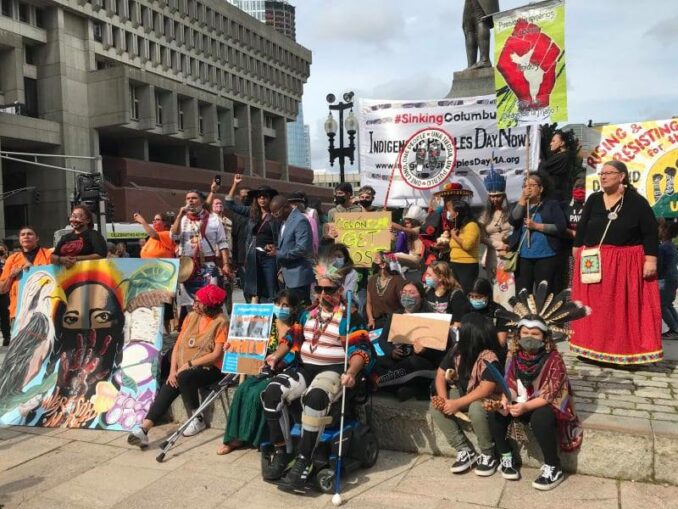 Present at the signing and press conference were members of the Massachusett Tribe at Ponkapoag, whose traditional territory encompasses the City of Boston, as well as Indigenous activists and leaders from the North American Indian Center of Boston (NAICOB) and United American Indians of New England (UAINE).

Raquel Halsey, member of the Mandan, Hidatsa and Arikara Nation and Executive Director of the NAICOB, said of the Executive Order: “I’m so proud to have a mayor who listens to the community and works to make Boston an inclusive city. As a service provider, we have heard countless stories of Indigenous people feeling unwelcome in Boston, and they have felt the lasting consequences of genocide and colonialism every day. Recognizing Indigenous Peoples Day is an important step toward addressing the lived experiences of many residents and building trust between municipalities and Indigenous nations.” 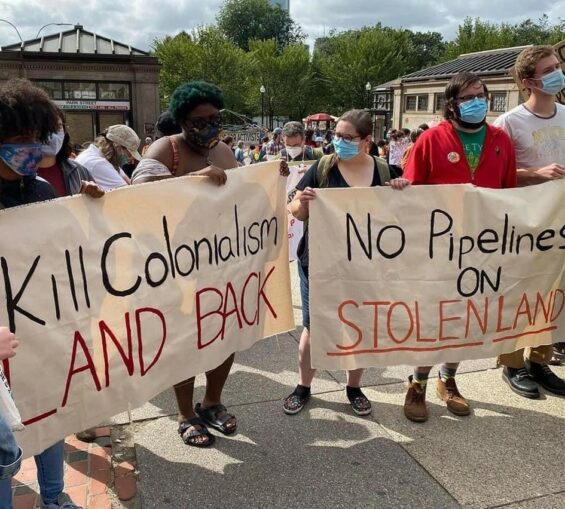 Bolstered by that victory, an energized crowd of several hundred Indigenous people and allies gathered Oct. 9 for a rally and march to demand the Commonwealth of Massachusetts follow Boston’s example and replace Columbus Day with Indigenous Peoples Day. The demonstrators rallied outside the Massachusetts State House.

Mahtowin Munro, Oglala Lakota co-leader of UAINE and lead organizer for IndigenousPeoplesDayMA.org, explained some of the group’s demands: “Indigenous Peoples Day is being declared in cities and towns all across Massachusetts and across the country. We call on the state legislature to step up now and pass our statewide Indigenous Peoples Day bill. 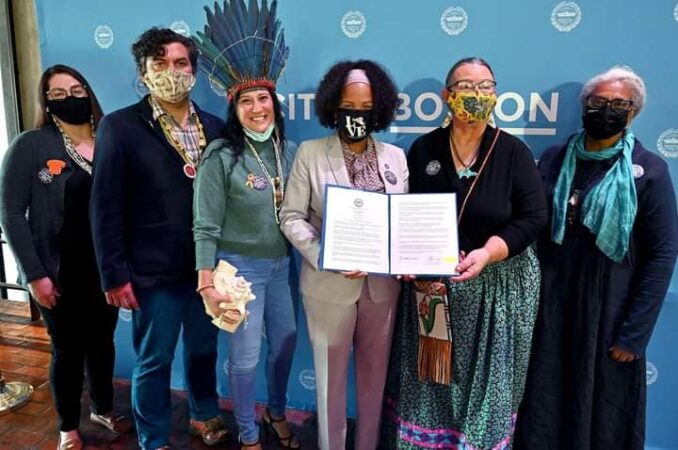 “It will also be important for them to pass our other legislation currently before them, including bills to ban Native American team mascots; to provide for Indigenous curriculum content in the public schools; to protect sacred Native American heritage; and to improve educational outcomes for Indigenous students. And we call upon the federal government to Stop Line 3 and other destructive pipeline projects that run through and endanger Indigenous lands.”

Munro continued: “In solidarity with our many migrant and refugee relatives who live in Boston and elsewhere, today we are also saying, ‘Break down the borders! ICE [Immigration and Customs Enforcement] and the Border Patrol need to stop harassing and detaining Indigenous, Haitian and other refugees!’”

After rallying at the State House, demonstrators joined Kevin Peterson, founder of the New Democracy Coalition, and other Black community activists to demand that Faneuil Hall, one of Boston’s shrines to slavery, be renamed. Jean-Luc Pierite from NAICOB and other speakers emphasized the need for collective Black and Indigenous action and liberation.

The crowd finally made their way to the so-called Christopher Columbus Waterfront Park, which once housed a Christopher Columbus statue, since beheaded and removed. Rally organizers demanded that the park’s name be changed and a more appropriate statue be erected to commemorate Boston’s vibrant Indigenous community.

The Boston victory is the culmination of six years of activism on the part of local Indigenous leaders. Every year since 2015, protestors have walked through the streets of Boston chanting words which are now no longer a statement, but rather a promise: “City by city, town by town, we’re going to take Columbus down!”