In 1971 Congress declared the second Monday in October Columbus Day to honor a genocidal colonizer. After decades of struggle by the Indigenous movement, this holiday was instead celebrated in the U.S. this year by 14 states and more than 130 local governments as Indigenous Peoples’ Day.

The struggle even pushed President Joe Biden to make the first-ever presidential proclamation of the day for this Oct. 11. But that concession fell far short of justice.

There was no mention of U.S. reparations to Indigenous peoples. Not even a pro forma apology for centuries of U.S. genocide; broken treaties; land theft; attempts at cultural obliteration; pillaging of natural resources; failure to fund education, health care and housing for Indigenous communities and nations.

Any public recognition of the history and accomplishments of Indigenous Peoples in the U.S. has been won by the peoples themselves — by their unrelenting struggle for over 500 years against the deadly forces of white-supremacist colonization and capitalism.

Indigenous peoples won a significant victory on Oct. 8 when Biden restored federal land protection to Bears Ears, Grand Staircase-Escalante, and the Northeast Canyons and Seamounts national monuments. In 2019 President Trump had thrown the lands open to exploitation by mining, fossil fuels and uranium corporations, which for decades had left a trail of toxic land dumps, sickness and death in Native nations of the Southwest.

But it was Indigenous struggle that wrested the land protection from the government in the first place! 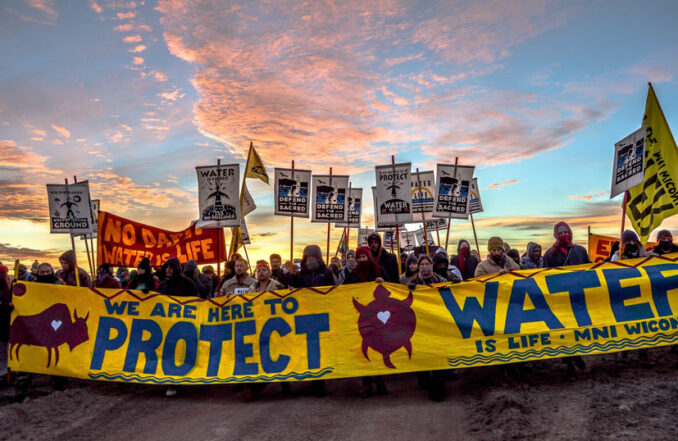 This is dramatically shown in the repeated and ongoing Indigenous actions to simultaneously protect the water, land and their sovereignty — like the Dakota Access Pipeline at Standing Rock in 2016 and the Enbridge Line 3 pipeline struggle now.

As wildfire raced through Redwood Mountain Grove on Oct. 8 — Earth’s largest grove of giant sequoias — U.S. National Park Service representatives had to admit the fires were fueled by a century of poor forest management worsened by climate change.

But Indigenous nations in their Sierra Nevada home had kept the forest healthy by practicing planned burning, long before white settlers arrived.

A Sept. 22 article in the journal Science asserted that fossilized human footprints in the Tularosa Basin of New Mexico are unequivocal proof that humans were in North America at least 23,000 years ago — 10,000 years earlier than previously postulated by white academics.

The thousands of years of human presence and development on this continent are no surprise to Indigenous peoples — who were here first and are here still. As the United American Indians of New England say: “We are not vanishing, we are not conquered, we are as strong as ever.”

This October is a chance for all progressive forces to honor Indigenous knowledge, skills and resistance, to acknowledge our mutual human interdependence and to provide practical, material support for Indigenous sovereignty, for return of their lands, for reparations and for their work to stop the death-dealing exploitation of our only Mother Earth.