Oct. 3: The legal team for kidnapped Venezuelan diplomat Alex Saab released the following statement Sept. 14. The struggle to prevent the illegal extradition of Saab from the island nation of Cabo Verde (Cape Verde) — where he is incarcerated as a result of U.S. pressure — is continuing on several political and legal fronts.

Saab is ill with cancer and was in treatment when kidnapped. His defense team emphasizes he has been physically and psychologically tortured in imprisonment, and denied his most basic human rights, including access to oncology care– carrying out a well-documented U.S. detention center scenario.

The fate of Saab will have an impact on diplomats from all 39 countries currently sanctioned by the U.S., affecting their safety and ability to represent their countries in international forums and in arranging trade and cultural exchanges.

On Oct. 2, the African Bar Association issued a statement demanding “respect for the rule of law in African countries and an end to the violation of court orders in the case of Venezuelan diplomat, Ambassador Alex Saab.” (Orinoco Tribune)

The Campaign to Free Alex Saab is asking for all possible mass support, including circulating its petition (bit.ly/FreeAlexSaabVZ), using material on the Alex Saab web page (AFGJ.org/Free-Alex-Saab), promoting his freedom on Twitter (@FreedomForAlexSaab, @FreedomAlexSaab), organizing and supporting webinars on his struggle and participating in actions at the Cape Verde Embassy in Washington, D.C., its consulate in Boston area and at the U.N. Mission in New York City. 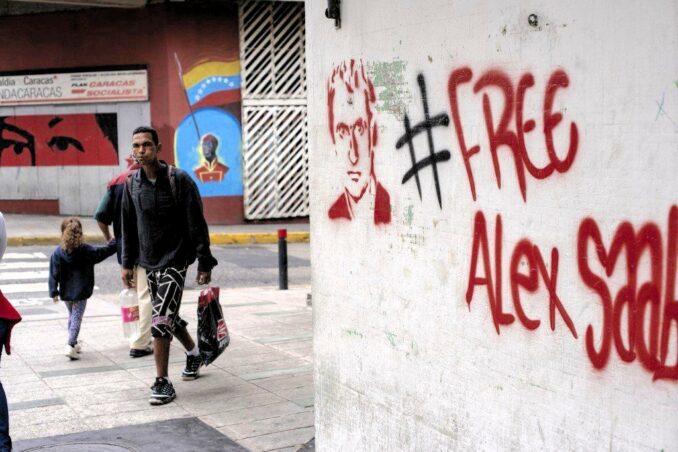 In Caracas, Venezuela, graffiti shows support for that country’s diplomat, Alex Saab, whose imprisonment was instigated by the U.S.

The International Defence Team of Venezuelan diplomat Alex Saab wishes to condemn the numerous ill-informed statements that have been made about the status of the legal process underway in Cape Verde.

Femi Falana, SAN [a senior advocate of Nigeria], who heads up Alex Saab’s ECOWAS [Economic Community of West African States] Defence commented: “Contrary to some of the statements which have been made in the media, the legal process is far from over, and His Excellency Alex Saab will not be going to the United States any time soon. The decision of [Cape Verde’s] Constitutional Court on September 7 leaves many legal ambiguities, and my colleague, Dr Jose Manuel Pinto Monteiro, will be seeking clarification from the Court by way of an urgent submission.”

Dr. Rutsel S.J. Martha, former Director of Legal Affairs for INTERPOL [International Criminal Police Organization], highlighted the fact that no arrest warrant was issued at the time of Alex Saab’s arrest on June 12, 2020, which, despite the attempt by the Constitutional Court to brush this aside as an inconvenience, cannot be ignored, as it is an absolute must, as required by Cape Verde’s obligations under the International Covenant on Civil and Political Rights (ICCPR).

Further, the same ICCPR places obligations upon Cape Verde to follow the directives of the U.N. Human Rights Committee (which called on June 8 and 16, 2020, for Alex Saab not to be extradited to the United States). Dr. Martha questioned: “Why has Cape Verde rushed to join dozens of international organizations, if it has no intention of complying with the rules required of members of those bodies?”

Once again, we must raise the issue of Alex Saab’s status as Venezuela’s Special Envoy and the country’s Deputy Ambassador to the African Union, which afford him immunity and inviolability. [International criminal law specialist] professor Vânia Costa Ramos commented: “It is surprising that there is no recognition of his diplomatic immunity.” David Rivkin, lead U.S. attorney for Alex Saab, added: “There is no doubt that Alex Saab is entitled to in transito [diplomatic] immunity — a concept which has long been recognized by the United States.”

Baltasar Garzón Real, [formerly a judge on Spain’s central criminal court], commented: “There are more than enough elements to demonstrate that there was trickery, and there was cheating [in the decision]. The arguments, with all due respect to the Constitutional Court, that are expressed in its decision of September 7, are not in accordance with either international law or treaties and nor with international human rights law. The detention of a diplomat is a barbarity — pure and simple.”

Finally, the Defence Team wishes to remind all parties that the Constitutional Court is authorizing extradition to a country which is openly politically hostile to Alex Saab and Venezuela, and whose courts are yet to determine if it even has jurisdiction.

We call upon the leadership of Cape Verde to honor their international obligations and do what is legally and morally right rather than submit to political expediency.