At the beginning of the coronavirus pandemic in 2020, panic buying seemed to create a shortage of different necessities, including toilet paper. Midway through the COVID-19 pandemic, housing prices started rising drastically, as demand surpassed supply due to shortages of construction materials.

As students returned to in-person learning, schools found nutritious food for school lunches more difficult to get, and the U.S. relaxed requirements that schools must comply with federal nutrition standards. Visit any grocery store recently and you are likely to find shelves bare of any number of items. 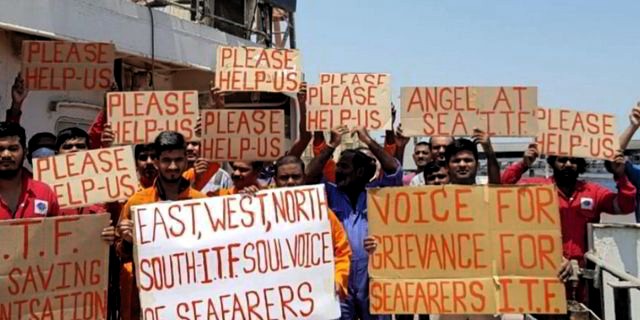 Hunger-striking seafarers fought to be liberated from a bulk tanker where they were trapped from 2019 to 2021 due to COVID restrictions and corporate legal abandonment at sea. The workers — from India, Bangladesh, Turkey and Azerbaijan — were freed after intervention from the International Transport Workers’ Federation.  Credit: ITWF

A global shortage of computer chips has created a drastic reduction in the production of cars, computers and appliances. Factories are experiencing shortages of metal parts, plastics and raw materials. Britain faces a fuel shortage, which some blame on COVID-19, while others point to a shortage of truck drivers due to BREXIT. In September, U.S. stores started warning consumers of a potential toy shortage for the holiday season.

This crisis is leading to higher prices on goods and services — if you can secure them at all. corporate media like the New York Times say: “Get used to it.” (Aug. 31)

The Times refers to the crisis as the “great supply chain disruption,” pointing to hundreds of cargo ships massed outside ports on U.S. coasts, waiting in long lines to unload thousands of giant cargo containers. “For the global economy, shipping is at the center of the explanation for what has gone awry.”

Acknowledging that the COVID-19 pandemic has taken a toll on workers, corporate media point to labor shortages: not enough dock workers to unload the massive numbers of mega shipping containers; not enough drivers to haul goods away from the ports.

Of course, the Times does not miss an opportunity to attack China as responsible — pointing to two occasions when China protected its workforce by shutting down container ports, after some workers tested positive for a coronavirus variant. In another article, the Times implied socialist Vietnam had caused a shortage of sneakers for donation to Haiti — because Vietnam’s shoe production had stopped during a strict lockdown to limit COVID-19. (Sept. 20)

Supply and demand crises are as old as capitalism — an economic system based not on production for human needs but for profit. Increasingly this system is interdependent globally, based on the labor of workers on nearly every continent. The current crisis, coming on top of already existing overproduction that began prior to the COVID-19 pandemic, lays bare the systemic problems of capitalism.

The Times article includes two short references to this: “Many companies had slashed their inventories in recent years, embracing lean production to cut costs and boost profits. That left minimal margin for error.” And “The world has gained a painful lesson in how interconnected economies are across vast distances, with delay and shortages in any one place rippling out nearly everywhere.”

Over the last 40 years, the scientific technological revolution has allowed capitalists to reorganize world production, bringing hundreds of millions of low-wage workers into globalized manufacturing and services. From cars to computers, most production today depends on the collective labor of this global workforce.

Every product of labor, from a shirt to a supertanker, is the product of intermingled world labor. For example, the supply chain for just one computer includes hundreds of companies in North America, Europe and especially Asia, with suppliers competing to offer the lowest price to manufacturers. Each parts supplier must keep inventory on hand to keep the manufacturer from going elsewhere — tying capital up in stockpiled supplies. Meanwhile, major producers rely on ordering parts at the last minute, or “just-in-time,” to keep costs down for them.

Driven by planning production to maximize profits, capitalists introduced the “just-in-time” strategy in the 1970s. In this system a finished product is produced only after a buyer submits an order, with necessary parts ordered from suppliers just before assembly. 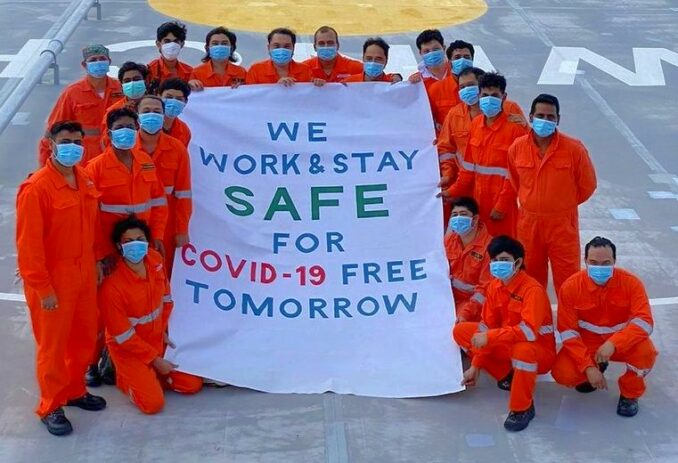 Seafaring transport workers share a message of safety from their ship. Supply chain workers around the globe are represented by the International Transport Workers Federation (IFT). Credit: Mitsui O.S.K. Lines

In the past, a stockpile of inventory could meet any variable sales demand and serve as a buffer against production shortages. However, corporations have come to view inventory as tied-up, or “dead,” capital, and a burdensome profit-sapping overhead cost.

While just-in-time may look good for corporate profit margins, any natural disaster such as a climate catastrophe or a supply shock like a global pandemic can pose a serious threat to capitalism’s ability to smoothly and quickly distribute products and services.

If global supply chains are disrupted for any reason, just-in-time production leaves companies unable to meet demand and can worsen an existing capitalist economic downturn.

Ironically, one of the areas of production where this problem surfaced most recently in the U.S. was the supply of testing equipment for the coronavirus. Despite adequate warnings from China about COVID, Western manufacturers failed to produce adequate amounts of testing supplies and personal protective equipment.

These shortages continue, as does the production shortage of vaccines vital to limiting the spread of the virus worldwide.

Over the past 21 months of pandemic, capitalist governments invested trillions of dollars to prop up their economies. Yet they haven’t been able to reverse the economic decline.

In the U.S. workers received a few thousand dollars in stimulus checks — to “stimulate” the economy. But corporate CEOs got millions to offset the capitalist crisis, when their companies could not profit by exploiting the labor of workers who were either unable or unwilling to clock into jobs made unsafe because of the pandemic.

The result has been an ever-widening income inequality gap. Centibillionaires like Jeff Bezos and others have been able to afford multimillion-dollar space trips, while many workers can barely to ride the subway.

For the capitalists it’s all about the profits workers make for them by applying their labor power to the means of production — what the bosses own and control — the factories, plants and, yes — the ships. But the core of the supply crisis is not about their ships being unable to dock.

The supply crisis is about the collective problems of 65 million global transport workers, employed in over 3.5 million road, freight and airline companies and in 80% of the world’s merchant shipping fleet. These workers are unable to continue to do their jobs, because globally capitalists refuse to deal with pandemic risks to worker health and safety.

The letter, which received some international media attention, states: “Global supply chains are beginning to buckle, as two years’ worth of strain on transport workers take their toll. All transport sectors are seeing a shortage of workers and expect more to leave as a result of the poor treatment millions have faced during the pandemic, putting the supply chain under greater threat.”

The letter addressed specific problems faced by 400,000 maritime workers denied shore leave and unable to leave their ships for up to 18 months beyond their initial contracts. Guy Platten, secretary general of the ICS, said: “Worker shortages are likely to worsen toward the end of the year, because seafarers may not want to commit to new contracts and risk not making it home for Christmas, given port shutdowns and constant changes to travel restrictions.” (tinyurl.com/dymcdxuk)

The unions emphasized that transport workers continue to face a myriad of vaccine and testing requirements, often imposed at a moment’s notice. “Drivers have faced hundreds of border issues and blockades through the pandemic,” said Umberto de Pretto, IRU secretary general. “Truck drivers, and the citizens and businesses that depend on the goods they move, pay a heavy price for misguided COVID restrictions that do not exempt transport workers.”

The shipping industry typically recruits its maritime workers from poor countries, where wages are low and health systems inadequate. But 60% of the world’s population who have not received the COVID-19 vaccine live in underdeveloped countries. Access to the vaccine for many transport workers is severely limited because of restrictions placed on vaccine production and distribution by big pharmaceutical companies.

Warning of a potential “system collapse,” the international transport unions called on world leaders to increase global vaccine supplies by removing these restrictions.

“The global supply chain is very fragile and depends as much on a seafarer as it does on a truck driver to deliver goods,” added Stephen Cotton, ITF secretary general. “The time has come for heads of government to respond to these workers’ needs.”