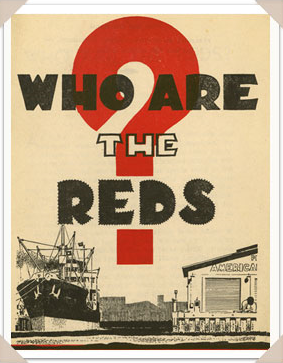 In the course of the battle over Biden’s “build back better” bill, the ugly specter of anti-communism has raised its head, most prominently in the U.S. Senate and from the right-wing media. No doubt this poison is also being spread in less open forums.

Senator Marco Rubio infamously tweeted, “The $3.5 trillion Biden plan isn’t socialism, it’s Marxism.” Apparently, Rubio made this distinction because the word “socialist” is being associated more and more with anything good for poor people, for the working class in general. So he had to find a new insult word.

Louisiana Senator John Kennedy — no connection with the late U.S. president — in his attack on Biden, went to the core. He said Biden’s program “will turn [the U.S.] America into Cuba.”

While many of us might react, “Would that it were true!” the goal of the attacks is clear: to play upon years of miseducation that U.S. propaganda spouts about socialism, communism, Marxism, “the Reds!”

The next step is to mobilize these indoctrinated fears to defeat any legislative or social program that might help workers and poor people or eliminate historical inequalities.

A close look at the proposed development plan in Congress shows that − with severe limitations — parts of it provide some benefits to the working class and could be used to defend the environment.

To rightists like Kennedy and Rubio, that’s Marxism, socialism or communism.

The only truth to their comment is that it is exactly Marxists, socialists and communists who fight the hardest to win such benefits for the working class.

And we do so while attempting to build equality and solidarity among all sectors of that working class, trying to remove all the burdens of special oppressions imposed by capitalism.

While this red-baiting is an attempt to undercut Biden by calling his program “Marxist,” the truth is that his proposals are simply a set of reforms designed to make U.S. capitalist society slightly more humane and therefore more bearable, while at the same time making it more efficient — for capitalists.

A truly Marxist or socialist program would guarantee that everyone had equal access to education, health care, guaranteed employment and income — and that care for children would be available as a social benefit for the whole society.

A Marxist program would not only tax the rich to pay for part of these benefits, it would seize the major means of production from the rich and eliminate the exploitation of workers.

Such a program would also mobilize popular forces to replace the repressive forces of the capitalist state — the military, the police, the courts and the corporate media. In the hands of the workers, these forces would be used to prevent the former capitalist rulers from using undemocratic means to take wealth from the workers — who produce all the wealth in the first place.

So we say to Rubin and Kennedy and their fellow thinkers: Your attack on the “build back better” bill is based on fearmongering. But now you’ve got us thinking about what we really need for the U.S. and for the world: a socialist-Marxist-communist revolution — of, by and for the workers!