A movement of Pennsylvania activists are working to end the state’s policy of sentencing incarcerated people to life without the possibility of parole (LWOP). They have coined the term ‘death by incarceration’ to describe this cruel punishment. 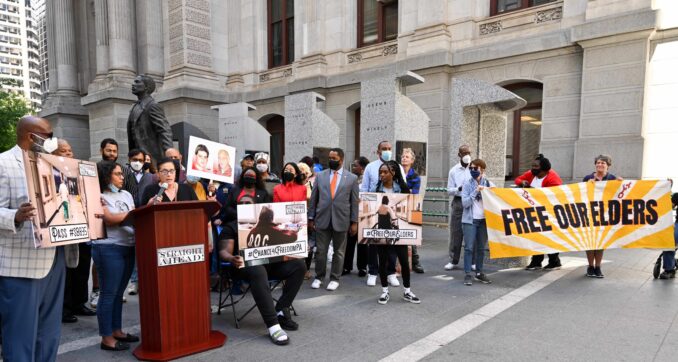 The activists held a press conference and rally in Philadelphia Sept. 30 to promote SB835, introduced by a bipartisan group of legislators. If passed, the state bill would offer geriatric and medical parole for anyone, aged 55 years or older, who has served 25 years or half their sentence, whichever comes first.

The bill would offer incarcerated people with a chronic medical condition — either a physical or mental illness — a chance at parole. Currently, an incarcerated person in Pennsylvania needs to petition their sentencing judge to qualify for compassionate release. And they need a doctor to confirm they have less than a year to live, and in most cases be unable to walk.

In Pennsylvania, the more than 10,000 incarcerated people over 55 are considered geriatric, because their life spans are shortened by oppressive prison conditions, including poor nutrition and health care, severe stress and the risk of violence. The total state prison population is around 38,000. (tinyurl.com/em8s8746)

Each year, 133 people enter the Pennsylvania prison system with LWOP sentences. On average, 28 of these lifers will die behind bars each year. The geriatric population in the state exploded from 6% in 1996 to 25% by 2020. The pandemic worsened the situation, impacting 11,000 incarcerated people in the state’s prisons, with 141 dead because the Department of Corrections failed to act to contain the virus.

Pennsylvania has some of the harshest sentencing policies in the U.S. A person can be convicted of felony murder, also known as second-degree murder, if they participated in a robbery or kidnapping that resulted in a death. This applies to everyone involved, even if unarmed.

Rally to ‘Free our people!’

At the Sept. 30 gathering by the statue of Philadelphia abolitionist Octavius Catto, a group of 50 people gathered to hear from survivors of state violence, their families and legislators who are working to pass SB835. People attached photos of family members currently incarcerated with LWOP sentences to a large banner, “Free our people!”

As speakers advocated for freedom for thousands of people currently incarcerated in Pennsylvania prisons, many of those imprisoned, now or formerly, told of their experiences. Some speakers explained why the bill would be game-changing in particular for Philadelphia, seen by some as the death-by-incarceration capital of the world. Other speakers included Pa. Sen. Sharif Street, Pa. Sen. Nikil Saval and Pa. Rep. Rick Krajewski.

Several speakers addressed the excessive cost of incarcerating geriatric people — often two to three times higher than that of a nonelderly inmate. The 2019 Pennsylvania Department of Corrections (PA DOC) budget sought $15 million to meet the rising cost of treating elderly and sick inmates, who are more likely to suffer from cardiac disease, high blood pressure, hepatitis C, diabetes and other chronic diseases.

One speaker strongly denounced a proposal from the PA DOC to construct a new prison planned to exclusively house incarcerated people suffering from Alzheimer’s disease.

Speakers also addressed the racial disparity in Pennsylvania’s prisons, where Black, Latinx and Indigenous people account for 65% of those serving life sentences. According to a report on LWOP sentences, released by the Abolitionist Law Center in 2018, a Black Pennsylvanian is 18 times more likely than his or her white counterpart to be sentenced to life without parole.

The press conference was hosted by Straight Ahead, with endorsements from the Abolitionist Law Center, the Defender Association of Philadelphia, Amistad Law Project, grassroots prisoner support groups Human Rights Coalition and the Coalition to Abolish Death by Incarceration.