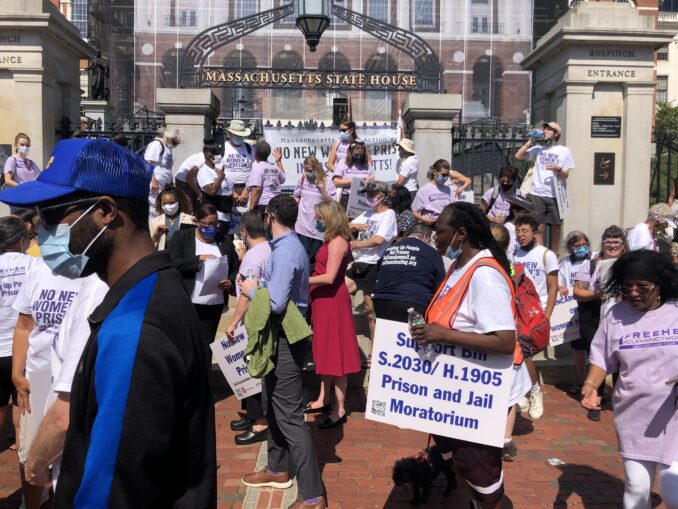 Prison abolitionists arrive at the Massachusetts State House after a 90-mile march against new prisons and jails in the state, Boston, Sept. 13.

By mYia X and Phebe Eckfeldt

Sept. 13 — Today, a 90-mile march, the “Long March for No New Prisons and Jails,” ended at the Massachusetts State House with 100 abolitionists and supporters rallying and holding a press conference. The marchers demanded a moratorium on construction of new prisons and jails in the state. They called on people to support two bills in the House and Senate (H1905 and S2030) which demand this. “Build up people, not prisons!” the ralliers said.

The march from Springfield, Mass., to the State House, Sept. 7-13, was organized by Families for Justice as Healing, the National Council for Incarcerated and Formerly Incarcerated Women and Girls (NCIFIW), Justice 4 Housing, Mass Peace Action and others.

Marchers passed by the Worcester County Jail, MCI Framingham (the state women’s prison), where they held a rally, and the Suffolk County House of Correction, where a rally was held in honor of Ayesha Johnson. The 35-year-old Black mother died there in custody July 28. Johnson was in need of mental health support, but instead was taken to the prison where she was finally found alone and unresponsive in a holding cell. Her family and friends are demanding answers.

Families for Justice as Healing stated on their website: “We walk inspired by a vision of ending the incarceration of women and girls in the Commonwealth of Massachusetts and shifting our state’s focus from investment in imprisonment to investment in housing, education, health care and jobs — all the elements that are required for a productive and satisfactory life. We walk to raise the alarm that Governor Charlie Baker is trying to build a new, $50-million women’s prison or invest as much in renovating and expanding the women’s prison at Framingham, where currently less than 150 women are incarcerated.” (tinyurl.com/bh8cazfk)

At the rally which ended the march, speaker after speaker demanded a moratorium on prison building. “The state spends more on prisons than on health care and education combined,” said Andrea James, executive director of NCIFIW. James, a formerly incarcerated woman, was a lead organizer for the event.

A November 2020 report from the Sentencing Project emphasizes the rising number of imprisoned women in the U.S.: “The female incarcerated population stands over seven times higher than in 1980. More than 60% of women in state prisons have a child under the age of 18; 1 in 50 children in the U.S. has a parent in prison.” (tinyurl.com/8tt922jp)

One speaker said that he had visited MCI Framingham several months ago, and due to the COVID pandemic, no programs were functioning there at all. Or rather, the only “program” underway was the sweatshop where the women were sewing American flags!

Leslie Credle, executive director of Justice 4 Housing, Inc., which finds housing for women leaving prison, spoke of having her baby taken away from her when she was incarcerated and the pain of being forced to parent from jail. She recounted how when her daughter was killed at age 22, she was not allowed to attend her funeral and was instead locked in solitary confinement. As a result, anxiety and panic attacks are part of her daily life now.

Another woman spoke of the deep, lifesaving support that the women incarcerated at MCI Framingham provided to her. “They raised me, fed me and made sure I went to educational programs.”

The struggle continues with more and more people taking to the streets demanding “Tear Down the Walls! Housing, daycare, education, health care for our communities, not incarceration!”