A delivery of tankers of diesel fuel from Iran and Syria to sanctioned Lebanon is a historic breakthrough with both immediate practical assistance, political solidarity and a direct challenge to the U.S. siege of the entire region. 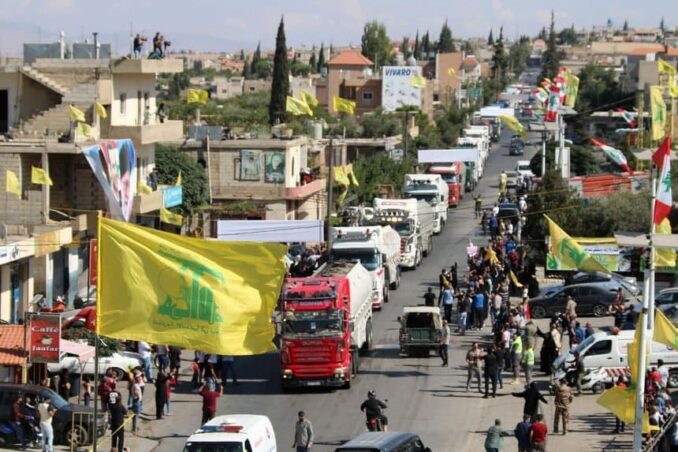 The shipments, which began arriving Sept. 16, were announced weeks in advance and brought thousands of tons of desperately needed fuel. The Iranian ships openly moved from the Red Sea through the Suez Canal and into the Mediterranean Sea to Syria’s port of Baniyas. From the Syrian port, just north of the border with Lebanon, convoys of tanker trucks drove through unofficial entry points into that country.

Videos of cheering crowds greeting lines of the huge trucks vibrated through the media of the entire region. The first fuel convoys were met with celebratory gunfire and people throwing rice and rose petals into their path, as they travelled through the northeastern village of al-Ain.

At least 80 trucks in four convoys arrived by Sept. 17 in Lebanon’s north Bekaa valley, Beirut and other coastal cities. Oil export monitor Tanker Trackers says that the four-tanker shipment contained a total of 33,000 metric tons of gasoline and that 792 tanker trucks would be needed to deliver the entire shipment to Lebanon.

“If the Lebanese government wants to buy fuel from us to resolve the problems faced by its population, we will supply it,” Iranian Foreign Ministry spokesperson Saeed Khatibzadeh stated. (tinyurl.com/e78e2bhr)

The breaking of the siege and the deliveries organized by Hezbollah, the Lebanese Resistance Movement, are viewed as a huge victory for the resistance movement in Lebanon. The successful shipment is seen as a potential challenge to the viability of U.S. sanctions by three countries — Iran, Lebanon and Syria — that are being driven by the sanctions to the brink of collapse.

In a speech on the arrival of the first convoys, Sayed Hassan Nasrallah, secretary general and leader of Hezbollah, announced this had broken an “American siege.”

He added that a month’s supply of fuel would be distributed free of charge to government hospitals, nursing homes, orphanages, civil defense forces and the Lebanese Red Cross. The rest of the fuel will be sold “below cost” to bakeries, private hospitals and companies operating generators.

Hezbollah, a major political force in Lebanon, has long been part of the country’s governing system, with ministers and elected members of parliament.

Hezbollah fought to liberate Lebanon from Israeli military occupation in 2000 and has defended the country against several U.S.-backed Israeli attacks since. Its fighters have helped the elected government of President Bashar Hafez al–Assad of Syria withstand the U.S. effort to overturn and dismember that country.

When the U.S. put Hezbollah on its terrorism list in 1995, this initiated sanctions that have blocked every form of Lebanon’s government and business purchases, even of the most essential supplies, from other countries. U.S. sanctions are directly responsible for Lebanon’s economic collapse, that has left the country not only short of fuel but lacking in other basic necessities, such as medicine and even drinking water.

The country’s economic collapse, according to the World Bank, is one of the worst during modern times. The Lebanese currency has lost more than 90% of its value against the U.S. dollar since 2019, causing inflation to skyrocket and pushing three-quarters of the population into poverty. Electricity outages can now last as long as 23 hours a day, bringing essential industry and normal functioning to a standstill.

U.S. sanctions across the region, from Afghanistan through Iran, Iraq, Syria and Lebanon, block regional cooperation. The U.S. sanctions extend to all financial and banking transactions and to obtaining essential supplies or selling materials for export. All credits for trade and rebuilding aid in this region torn by U.S. wars are frozen by U.S. sanctions. These strangle almost every country in the region except Israel, which is always guaranteed billions in U.S. funding and political support.

U.S. ambassador to Lebanon, Dorothy Shea, has said the country does not need Iranian fuel. Instead the U.S. supposedly backs a plan to ease Lebanon’s energy crisis through Egyptian natural gas, piped via Jordan and Syria. At the same time, U.S. sanctions don’t allow transport through Syria.

The U.S. sanctions on Syria block all efforts at rebuilding that war-torn country — after 10 years of U.S. bombing, arming of mercenary forces and efforts to overturn the government. As for Iran, it was the U.S. that broke the treaty it had signed in 2015, with six other countries and with Iran, that had pledged to end U.S. sanctions on that country.

All efforts at breaking this U.S.-enforced policy of mass starvation and enforced underdevelopment must be supported. End all U.S. sanctions!