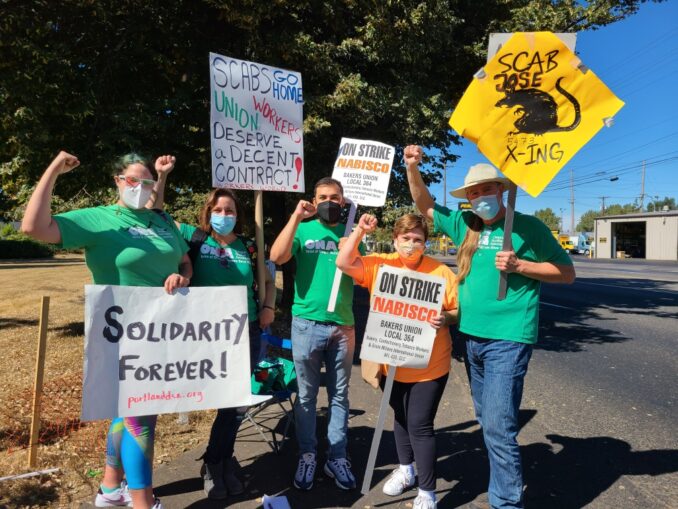 Rebecca Cooper, second from the left, strategic campaign manager of the Oregon Nurses Association stands with four members of their union. ONA union members have supported the Nabisco strike since the beginning.

It’s Day 32 of the Nabisco strike in Portland. Picket lines swell every Saturday, when members of unions, groups and the community join together in a support rally for the striking Bakery, Confectionery, Tobacco Workers and Grain Millers Union Local 364. The message is clear from rally speakers, picketers’ placards and chants: “we are in it to win it!” and “Don’t buy Nabisco products.”

The picket line is four blocks long, along a highway with a constant stream of drivers honking in support as they pass by.

During this Saturday’s Sept. 11 rally, a huge semitruck was prevented from turning in to the plant, as picketers gathered together to block the driveway. The driver was stalled in the turning lane for over five minutes, until an unrelenting crowd forced him to drive away. 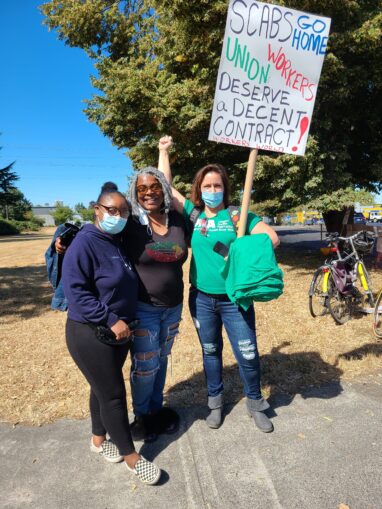 Donna Marks, center, a spokesperson for the BCTWGM union will be speaking about the Nabisco strike at a Sept. 30 WWP webinar called “Signs of Struggle and the Road Ahead: Workers Fight Back.”

Doug, retired Nabisco worker said, “Our goal is to get the word out that every cracker that stays on the shelf is a loss for Nabisco’s owner, Mondelez International.” He said some of the flour they are using is stale, because supporting protesters prevented the trains from delivering flour for three weeks.

Doug reported that Nabisco guards tried to intimidate protesters by shoving them and getting up close in their face, as they blocked scabs from getting to the plant. Scab-carrying buses and vans were pushed back into the neighborhood, and the strikebreakers were forced to walk to the plant through the “walk of shame.”

BCTWGM Vice President Mike Burlingham said at today’s rally: “Today is a personal milestone for me, as this is the official 14-year anniversary of my employment at Nabisco. That used to mean something; but now, it’s just a number. It means nothing, because I am no longer going to be able to plan with the retirement I was promised by the company when I first started.”