With pandemic rates surging, President Joe Biden on Sept. 9 announced plans to mandate vaccinations for tens of millions of U.S. workers against COVID-19, including in the private sector, health care and federally funded programs. He also announced plans to encourage K-12 schools to mandate masks for all, require vaccines for workers and increase COVID testing. His plan would restore funding to districts risking funding cuts for violating their state’s anti-mask restrictions. 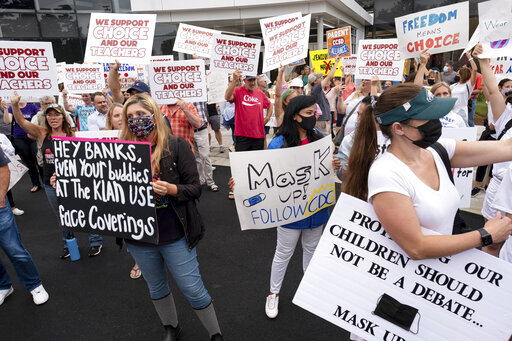 People in favor of and against a mask mandate for Cobb County schools gather and protest ahead of the school board meeting Thursday, Aug. 19, 2021, in Marietta, Ga. (Ben Gray/Atlanta Journal-Constitution via AP)

Under Biden’s executive order, all businesses with more than 100 employees must require workers to be immunized or submit to weekly testing. Around 50,000 health care facilities that accept Medicare or Medicaid funding would be required to vaccinate workers. Federal employees will be required to get vaccinated or lose their jobs, without the option to be tested.

Biden’s order, which still must be written, will impact an estimated 80 million workers — two-thirds of the U.S. workforce. Businesses would be required to give workers paid time off to get vaccinated. Bosses who ignore the mandate could face $14,000 per violation. Workers face even more – the loss of their jobs.

The pronouncement comes while new U.S. infections have surged to over 150,000 a day, with daily deaths rising to 1,500, largely due to the delta variant. Despite these new COVID-19 numbers — the highest since early this year — there is already widespread opposition to Biden’s plan, particularly in states where governors have already restricted mask mandates and vaccine requirements.

But not all the opposition is coming from the usual suspects.

Politically, the anti-vaxxers and anti-mask movements have polarized the population, confusing many by making the issues “individual rights” vs. “authoritarian” governments. While “populist/fascist” types aggressively defend the right to refuse vaccines, not everyone opposed to vaccine mandates is a right-winger.

Many in communities of color are leery of government-backed medical campaigns. Racist, often dangerous health policies and clinical experiments have historically targeted Black and Brown communities. One of the most infamous was the Tuskegee syphilis study (1932-1972), a study of Black men, many of whom had the disease. They were left untreated, even after penicillin was found to be an effective cure. Also, women in Puerto Rico were subjected to widespread forced sterilization from the 1930s to 1970s.

U.S. corporations, eager to force workers to return to their jobs, regardless of safety issues, may be more inclined to support Biden’s plan. Several large companies already mandate vaccinations or regular testing. However, a meatpacking trade group voiced opposition to the vaccine mandates, citing fear of losing workers — although they seemed less concerned when their unprotected workers were dying from COVID-19.

The labor movement is also torn over vaccine requirements. It is no surprise that both the National Nurses Union and the American Federation of Teachers support the call, given the particularly deadly impact of COVID-19 on their members. But others, including the United Auto Workers and some public employee unions, see the mandate as government trampling on workers’ rights and opening the door to having other concessions imposed.

The American Federation of Government Employees challenged the implementation of the policy as not giving workers a voice in their working conditions.

Also unsurprising is the wide opposition from groups representing police and prison guards, who have tended to show some of the lowest rates of vaccination despite high incidents of contact with the public. While several states have mandated that incarcerated workers either be vaccinated or remain in solitary cells, guards and other prison employees have remained exempt from mandatory testing and vaccines.

How should a workers’ party view this? How do we promote intelligent public health measures while defending workers’ and union rights? Where have there been successful vaccination campaigns, and why did they work?

Mandatory vaccines are not new in the U.S. Throughout the 19th century, smallpox outbreaks triggered the establishment of vaccination mandates, so that smallpox was eventually eliminated. The growth of public schools led to vaccine mandates for diseases, including measles, mumps and others. In 2007, Texas, under Gov. Rick Perry, became the first state to mandate that all girls entering sixth grade receive the human papillomavirus vaccine (HPV) to prevent infections that cause cervical cancers.

On Feb. 20, 1905, the U.S. Supreme Court in the case of Jacobson v. Massachusetts upheld the constitutionality of mandatory smallpox vaccination programs to preserve public health. In that case and others that challenged various state and local mandatory vaccine requirements, SCOTUS maintained that it was “within the police power of a state to provide for compulsory vaccinations.” (tinyurl.com/4922h8es)

Challenges to any current COVID-19 vaccine mandates are likely to eventually reach the Supreme Court. It remains to be seen whether the current court, dominated by conservatives, will uphold this century-old ruling. The Jacobson decision involved the constitutionality of a law, while Biden’s mandate came via executive orders.

Successes and failures of vaccine programs

Beyond the issues of mandates and anti-vaxxer opposition, other conditions have stood in the way of full population vaccination in the U.S. From the beginning, even regulations regarding mask wearing and COVID testing were left up to local politicians and officials to decide. Testing supplies were initially flawed and later limited. Many still question the accuracy of COVID cases and death counts reported in the U.S.

The Centers for Disease Control and Prevention has often issued contradictory and confusing guidelines. Especially concerning was their May 2021 recommendation that vaccinated people did not have to wear masks, including indoors. By requiring no proof of vaccination, the CDC, which has since retreated on the policy, let unvaccinated people, often opposed to wearing masks, to go out in public without them.

Even COVID-19 vaccination programs were flawed from the start, again left up to states and localities to set guidelines on who was eligible. Access to vaccines was essentially determined by one’s zip code, with no centralized programs for vaccination distribution.

Lack of access to medical facilities and vaccination distribution centers continues to impact poor areas, both rural and urban. The requirement to produce an ID has restricted access for undocumented immigrants.

Residents in the isolated rural community of Panola, Ala., population of 400, began dying from COVID-19 early on. The closest health clinic was over 30 miles away. Longtime African American resident Dorothy Oliver decided to try to reverse this. She launched a very grassroots campaign to educate her neighbors about COVID-19, have them tested and get them to sign them up for vaccinations.

Oliver went door-to-door talking to every resident. At first, she drove them to a vaccine clinic 39 miles away. After she convinced nearly the entire population to sign up for vaccines, she was able to arrange for mobile clinics to come to Panola. Her efforts resulted in 94% of her town being fully vaccinated — while less than 45% of the rest of Alabama is fully vaccinated.

Oliver’s story, the subject of a mini-documentary, could be replicated by organized labor. What if unions encouraged shop stewards, usually the most active and aware members in close association with the rank and file, to carry out similar educational, pro-vaccine campaigns, that would not rely on top-down mandates from bosses or the capitalist state?

Prior to the outbreak of COVID-19, the Trump administration made major cuts to budgets of the National Institutes of Health and the CDC. Even as the pandemic began to surface in the U.S., the CDC’s budget was reduced by another $693 million.

When the SARS virus broke out in 2002-03, China’s public health infrastructure was less robust than it is today. Of the 800 deaths from SARS that occurred worldwide, some 65% occurred in China. By setting a quarantine in Beijing and canceling a week of vacation in 2003, the government finally controlled the SARS outbreak. (tinyurl.com/vp2xc95r)

Having learned from SARS, the Chinese government improved the training of public health professionals and developed one of the world’s most sophisticated disease surveillance systems. After initially being caught off guard with 80,000 COVID cases and 3,000 deaths in Wuhan, toward the end of 2020 China limited additional cases to 9,100, with only 1,407 recorded deaths. Today, people in China can carry on fairly normal lives. This is what the corporate media call “authoritarian.”

Contrast that to the U.S. With only one-fourth the population of China, the U.S. to date has recorded an astonishing 41 million cases of COVID-19 and 660,000 deaths, and the numbers keep rising.

Biden can issue vaccine mandates, but restoring and expanding funding for public health agencies must be prioritized. U.S. imperialist foreign policies must change, including the lifting of economic sanctions that prohibit countries like Iran from getting vaccines, and Cuba from getting access to materials needed to produce and distribute the vaccines this socialist country has developed.

Let’s start with a cessation of hostilities toward China. Cooperation with scientists in China, as well as the World Health Organization, could go a long way in addressing what is a global pandemic. The biggest barrier standing in the way of ending this pandemic is the U.S. government’s attempt to dominate the world.