Sept. 12 — Activists held a press conference and rally today outside Soledad Prison, California Training Facility (CTF) to support a legal complaint by prisoners inside. Prisoners filed the lawsuit to expose the racist “cell extraction” of 200 Black prisoners last July and the subsequent criminalization of the victims of guard violence. 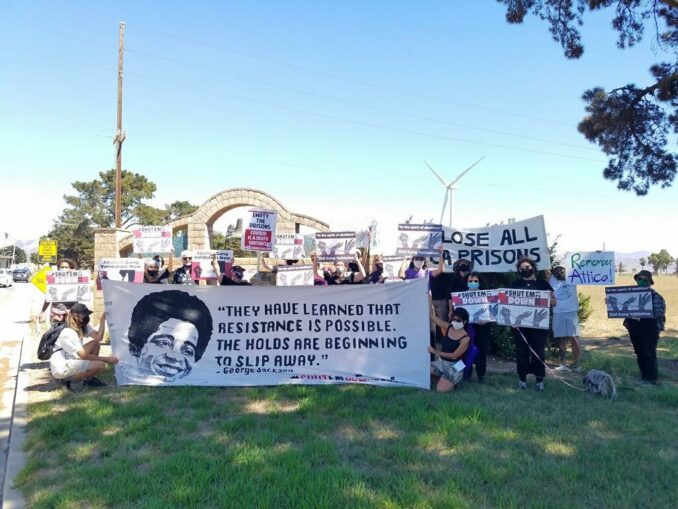 Prison abolitionists gather at the gate of California’s Soledad Prison to demand an end to “gang validation” and repression, Sept. 12.

In the middle of the night of July 20, 2020, guards targeted 200 Black prisoners and violently forced them from their cells. The guards’ official excuse was that they were investigating possible gang affiliations of the prisoners involved. The official “evidence” for gang affiliation was possession of radical prisoner writings and books by George Jackson.

After the racist fiasco was over, the attack sparked an outbreak of COVID at the prison.

The guards called the Black prisoners the “N” word and shouted “Black lives don’t matter” during the raid. These facts substantiate the point that the charge of gang affiliation was a bogus, racist lie.

George Jackson, Black prisoner revolutionary and member of the Black Panther Party assassinated in 1981, was originally labeled a member of the Black Guerrilla Family. This tag has long been used to divide incarcerated activists, jeopardize their parole dates and sentence them to long terms in solitary confinement in security housing units.

A major theme of today’s rally was “In the spirit of abolition: End gang affiliation.” Family members, activist attorneys and prison abolitionists spoke out against the campaign to label prisoner activists “gang members” for their work on behalf of the incarcerated. Speaker after speaker not only condemned last year’s racist removal of prisoners from their cells, they described the continuing harassment and criminalization of the organizing efforts of Black and Latinx prisoners inside.

In a recorded statement, Talib Williams — a prisoner inside who bravely exposed last year’s racist attack on Black prisoners — drew the connection between the racist attacks on Black people in the streets with the violence against the same community in the prisons.

“We are in a time where it is important for us to imagine a world without prisons.

. . . While this may be hard, we have to remember that there was once a time when people could not imagine a world without slavery.” Williams emphasized, “There is an alternative to prisons.”

Today’s event, which was part of national “Shut ‘Em Down” actions held Aug. 21 to Sept. 12, was organized and supported by the National Lawyers Guild-SF Bay Area, California Families Against Solitary Confinement, No Justice Under Capitalism, Anti Police-Terror Project, Oakland Abolition and Solidarity, and Workers World Party.