Finally, after months of denials, dismissals and weak excuses for multiple incidents of sexual harassment, New York Gov. Andrew Cuomo has resigned from office. This action came only after state Attorney General Letitia James, an African American woman, published a scathing, 168-page report on her four-month investigation on Aug. 3.

Civil rights attorney and investigator Anne Clark reported that 11 women who gave testimony — many of whom have identified themselves publicly — found the governor’s behavior “deeply humiliating and offensive.” Each of them gave graphic, detailed accounts of uninvited groping, fondling, kissing and suggestive comments. Most experienced the abuse in a workplace setting, but the daughter of Sherry Vill photographed Gov. Cuomo appearing to force a kiss on Vill at her home during a tour of flood damage to the home in 2017. (ABC News, Aug. 10)

We believe the survivors. 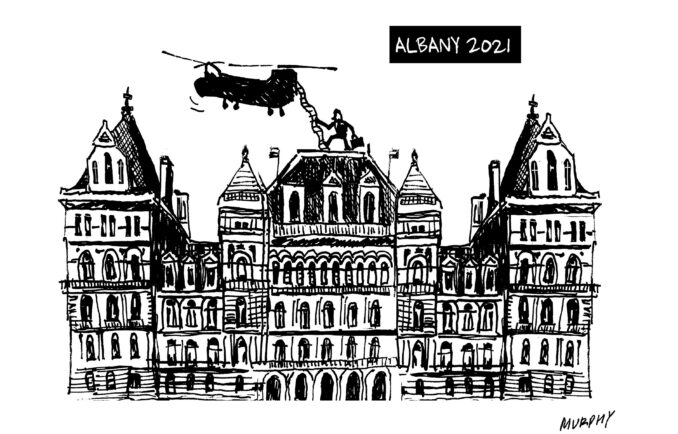 We unequivocally reject Cuomo’s pathetic explanations that his actions were “mistakes” or that he had not “intentionally disrespected women.” Even more so, we reject his denials of unwanted touching, which attempt to make liars of the courageous women who came forward, many at risk of losing their careers and income.

The events leading to the resignation are hardly unusual. Millions of women and gender-oppressed workers are sexually abused by their bosses, as well as co-workers. Workers of color are particularly vulnerable, because of the multiple forms of discrimination they face. As much as the facts of this case, political conflicts within the ruling class contributed to the downfall of the vengeful, abrasive and abusive governor.

Cuomo one among millions

Public exposure usually only happens with high-profile abusers — and they include not just Gov. Cuomo, but President Joe Biden and ex-President Donald Trump, not to mention racist enslaver Thomas Jefferson and the notorious philanderers John F. Kennedy and Bill Clinton. Sexual abusers include Supreme Court Justices Brett Kavanaugh and Clarence Thomas — the latter taken on by Anita Hill 30 years ago.

Others among the most famous include film producer Harvey Weinstein, whose harassing behavior and assaults led 300 women in the entertainment industry to launch #TimesUp in 2018.

The Me Too movement, begun by Tarana Burke in 2006, became a household name after a hashtag posted by Alyssa Milano drew millions of responses. Workers from all walks of life pointed the finger at their misogynist employers, including higher-ups in sports, television, film, finance, manufacturing, agriculture, restaurants and hotels — not to mention elected “public servants” like the aforementioned. McDonald’s and Google were hit with strikes over sexual harassment

They not only survived abuse by the perpetrator, but by the whole capitalist system, which perpetuates misogyny, racism, ableism, anti-LGBTQ2S+ oppression and class exploitation, all of which create power imbalances in the workplace that violators use to their advantage.

Thank you Letitia James, for doggedly pursuing the truth that drove Gov. Cuomo to resign. But we say it’s “time’s up” for all the sexist creep oppressors in positions of power — every one of them must go!

In fact, it’s time to get rid of the structure that fosters and protects their kind of behavior: the rotten capitalist mode of production, based on exploitation of the many by a small, filthy rich, elite owning class.

Time’s up! Talking about a revolution!