A new earthquake, whose epicenter was in southwest Haiti, hit the country Aug. 14, as reported by the U.S. Geological Survey. The quake was significantly stronger and shallower than one that devastated Port-au-Prince in 2010. Although the area around its epicenter is less densely populated than Port-au-Prince, the USGS is predicting hundreds of millions of dollars in damages and thousands of deaths. 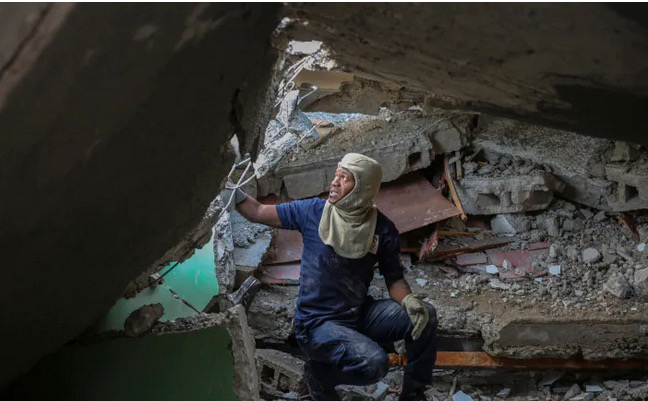 Hospitals close to the epicenter in Les Cayes, a city of 30,000, and Jérémie report they have insufficient supplies to handle all the injured and insufficient first responders or equipment to pull people out of the rubble. Social media videos show rescuers using sledgehammers and chainsaws to rescue trapped survivors.

Acting Prime Minister and interim President Ariel Henry declared a state of emergency. Since international organizations like the Red Cross misused the 2010 earthquake to raise and keep billions of dollars, Henry wants all aid to flow through the Haitian government.

Following President Jovenel Moïse’s July 8 assassination, the political turmoil in the country has intensified. Ariel Henry was to replace then-Prime Minister Claude Joseph on July 9. But the 10 and only members of Haiti’s parliament still in office selected Joseph Lambert, president of the Haitian senate, to become interim president after Moïse’s death.

Moïse had allowed the terms of all other elected officials in Haiti to expire by the simple expedient of not holding elections. Washington backed Moïse in this decision.

Ultimately, with the backing of the Core Group — ambassadors representing the U.S., France and other imperialist countries — Ariel Henry became acting prime minister. Since no parliament exists to confirm Henry’s selection, he will remain acting prime minister until elections are held. As prime minister, Henry declared himself interim president.

The Haitian National Police investigating the assassination arrested 18 Colombian mercenaries and two Haitian “translators.” The PNH has named no primary instigator or forces responsible for the plot. Most arrested mercenaries were trained by the U.S. Army in Colombia for the “anti-terrorist” special forces. The Haitian translators had been paid informants for the U.S. Drug Enforcement Authority.

Different versions of the assassination

The PNH’s favored narration has the mercenaries and translators hired by a Haitian doctor who wanted to pull off a coup d’état and raised his funding from a “development group” looking for profits in Haiti. Another version suggests the mercenaries were “fall guys,” who arrived at Moïse’s house after he was killed and were set up to take the blame.

That a broad conspiracy was involved is suggested because the extensive security in the wealthy Pétion-Ville neighborhood where Moïse lived failed to stop the attack, and because the presidential security detail vanished before the mercenary commandos arrived.

Investigating Judge Mathieu Chanlatte — presiding in Haiti’s legal system over the equivalent of a U.S. grand jury — resigned July 13 on the grounds that the government provided him insufficient security. One of his assistants died July 12 under “unclear” circumstances.

Whether or not the U.S. had a direct role in the killing, it is more than likely the U.S. government was aware of plotting against Moïse. The U.S. Embassy in Port-au-Prince is very large for such a small, poor country — and has extensive surveillance capabilities.

Can the Haitian government hold elections?

There is wide speculation that Moïse’s death was related to a feud inside the Haitian Party of Tet Kale (PHTK), to which he and former President Michel Martelly belonged. Moïse had sharp differences with some of the very wealthy members of the Haitian bourgeoisie.

During 2020-21, there were frequent and massive demonstrations challenging Moïse. The protests were over the failing electrical system, lack of jobs, wages that did not provide a survival level of life, financial corruption in the Moïse regime and its failure to adhere to the Haitian constitution, and the interference of U.S. and imperialist nongovernmental forces in Haitian affairs.

The assassination has removed Moïse as a target of the outrage of the people. Some opposition forces, like the Lavalas Party of former President Jean-Bertrand Aristide, are putting their emphasis on winning a fair and free election.

Moïse and previously Martelly were installed as president with the direct intervention of the U.S. Now it appears that the Core Group wants to allow the PHTK to organize elections in fall 2021 and then “count” the vote to determine an outcome favorable to imperialist and capitalist interests.

That scenario would remove the need for the U.S. to be blatantly involved in determining Haiti’s fate.

How the current earthquake will affect the PHTK’s ability to hold the vote remains to be seen.

Haiti has not completely recovered from the 2010 earthquake. Haiti is now facing another vast human disaster and desperately needs real, material solidarity, not imperialist maneuvers.