Aug. 17 – Wrenching images at the Kabul airport grip the world as U.S. officials had soldiers cast off  those who had cooperated with US occupation like excess baggage. The painful corporate media coverage diverts attention from Washington’s strategists who launched the criminal war for conquest and the politicians who authorized 20 years of looting of Afghanistan.

The U.S. war in Afghanistan was never a war for democracy or for the liberation of women. Hidden behind empty rhetoric was a war that generated fabulous, un-scrutinized profits for military, oil and contracting corporations. Corruption at every level was an essential ingredient of the war.

The epic failure of U.S. imperialism in Afghanistan raises the immediate question of what this means for U.S. global corporate power. Especially, what will this howling defeat mean for the entire vast region where U.S. wars have created a vast wreckage? 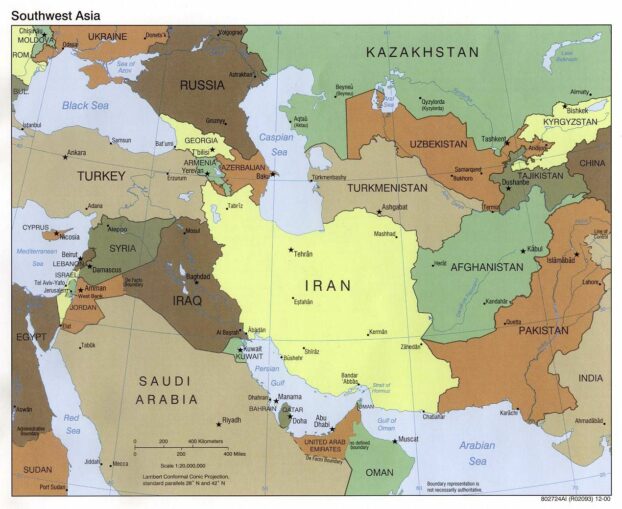 From Afghanistan through Iran, across Iraq, and into Syria and Lebanon, U.S. domination is being confronted with new confidence. The U.S. grip, from Central to Western Asia, is increasingly challenged.

The collapse of the government in Afghanistan has overwhelmed the news coverage of rockets fired and drone attacks on the U.S. Embassy in Baghdad, Iraq, as well as Iran’s increasingly hard line on any revival of talks involving the international nuclear accord the U.S. had walked away from.

Iraqi officials have demanded an end to all U.S. troops and bases in their country. Syria is reasserting its sovereignty, despite continued U.S. bombing. Hezbollah stands undefeated in Lebanon. Gaza still remains steadfast and determined.

The one U.S. ally in the area, Israel, faces growing isolation.

A vast swath of peoples, cultures and diverse political movements have all reached a similar conclusion: U.S. power brings only corruption and enslavement. Resistance is the only way forward.

Collapse on the morning news

The complete collapse of Afghanistan’s puppet government in Kabul coincided with the Sunday morning news. The speed of this deterioration took U.S. strategists completely by surprise. It exceeded the chaotic disarray seen in 1975 with the fall of the U.S. puppet regime in Saigon, Vietnam.

Sunday news program reporters on the scene described the Taliban’s arrival in Kabul as the police and military evaporated before them. Images of welcoming crowds in the streets couldn’t be hidden; they were carried on television screens worldwide. Trucks of Taliban fighters rolled down the streets. Coils of black smoke rose from the U.S. Embassy as documents were burned.

By nightfall in Kabul — prime news time in Washington, D.C. —  Afghan president Ashraf Ghani had fled the country with four cars and a chopper stuffed with cash. According to Reuters, Aug. 16, some money was left lying on the tarmac. Ghani was denied entry by Tajikistan, then by Oman and is expected in the U.S.

The Taliban took control of the presidential palace. News footage of Taliban leaders surrounded by dozens of armed fighters, addressing the media from the country’s seat of power, was broadcast around the world.

The U.S. ambassador had his country’s flag lowered at the vast U.S. Embassy and then headed to the airport for evacuation, the flag tucked under his arm.

Elaborate plans for a transitional government evaporated. The U.S. military presence, protection of the U.S. Embassy, and the evacuation of tens of thousands of Washington’s collaborators, translators and their family members evaporated faster than the soldiers and police could shed their uniforms.

This came after a week during which the insurgents occupied all the major cities in Afghanistan. It took only nine days from the fall of the first provincial capital until the collapse of the whole government.

The end of the destructive U.S. military presence does not solve the problems of Afghanistan’s underdevelopment or the enormous cost of rebuilding from the wreckage of war. U.S. economic sanctions continue to strangle. However, new possibilities and alliances with China, Russia and Iran are opening, much to the frustration of Washington’s loyal strategists. An end to decades of U.S. war and corruption can pry open changes in culture and social relations.

The utter defeat of the puppet government in Kabul does not mean social liberation or a solution to the problems of Afghanistan. After 20 years of U.S. military occupation, Afghanistan still ranks as one of the poorest countries in the world. U.S. occupation never brought democracy, workers’ rights, women’s rights or industrial development.

The Taliban’s reactionary views on the position of women get endless coverage. But the social position of the vast majority of women chained to patriarchal feudal relations did not change under the 20 years of U.S. occupation of Afghanistan.

Several thousand women of elevated social position and educational level may have benefited from the U.S. occupation. Unfortunately, they were mere window dressing. Such essential indices as educational levels, infant mortality, life expectancy, death in childbirth, and the freedom to choose marriage or divorce remain unchanged across overwhelmingly rural Afghanistan.

Who lost Afghanistan? The blame game

The rapid deterioration in Afghanistan has meant that all long-term plans and predictions are abandoned. Now the blame game begins in the corporate media, in Congress, and among Democrats and Republicans.

In the previous week the prevailing prediction was for a soft, negotiated collapse taking three to five months. Debates were on the future size of a U.S. presence, how many thousands in residual force would remain to “protect” the U.S. Embassy, how to house thousands of staff people, contractors and collaborators.

On July 8, when President Joseph Biden was asked by a reporter whether a Taliban takeover of Afghanistan was inevitable, he responded, ”No, it is not. Because you have the Afghan troops – 300,000 – as well-equipped as any army in the world, and an air force, against something like 75,000 Taliban. It is not inevitable.”

On the Afghan government, Biden had told reporters: “They clearly have the capacity to sustain the government in place…. There’s going to be no circumstances where you’ll see people being lifted off the roof of an embassy of the United States from Afghanistan.”

Nevertheless, the Taliban – lacking massive firepower, modern sophisticated equipment, or thousands of contractors — were a stronger force based on morale and internal discipline.

On Aug. 11, a U.S. Defense Department official, citing U.S. intelligence, predicted the Taliban could possibly take over Afghanistan within 90 days.

Three days before the Aug. 15 collapse, State Department spokesperson Ned Price had confidently stated that “We expect to draw down to a core diplomatic presence in Afghanistan in the coming weeks,” adding that “the embassy is not closed.”

On Aug. 10, five days before the collapse, U.S. envoy Zalmay Khalilzad ominously warned that the Taliban should not bet on an Afghan takeover, because the U.S. would not recognize a Taliban government if it came to power through force. There were sudden calls for non-violence and negotiations from the U.S., while it bombed Afghanistan. The sheer hypocrisy is hard to match. The U.S. has been the source of the violence. Millions of Afghans have died, been maimed, displaced and/or traumatized.

U.S. officials confidently threatened that the Taliban would get no respect or diplomatic recognition unless a withdrawal left the corrupt Kabul government in place, as an “orderly transition.” But the Taliban’s meetings in Russia, China and Iran, the very countries Washington has sought to encircle and isolate, answered this U.S. threat, much to their great frustration.

Washington’s regional agenda was the creation of an “Asian NATO” to confront China and Russia. Such plans are now in total disarray.

The prosperity of U.S. capitalism is connected to U.S. military and economic domination. Now the politicians discussing this defeat are making crass calculations of how cost effective the wars were.

The Pentagon’s wars are enormously profitable for the largest industry in the U.S.: the military-industrial complex. Similarly, keeping medicine for profit has led the U.S. to have the highest deaths in the world from COVID.

Spending trillions on war was always about profit. The danger emanating from profits based on military industries is that these deadly industries must have new wars.

In the coming period, the working-class movement must confront this vicious capitalist system that feeds on war. There will be an ocean of crocodile tears for U.S. collaborators who get left behind. It is essential to demand an end to all the wars currently underway and the new wars being planned behind the scenes.