Aug. 15 — Insurgent Afghan forces, under Taliban leadership, have surrounded the capital city Kabul. After its initial withdrawal, Washington has sent back 4,000 troops to defend its diplomatic retreat. U.S. imperialism’s 43-year war against the poorest of Central Asian countries and the Pentagon’s 20-year occupation is crashing to an end, as the puppet regime collapses like a house of cards in a hurricane. 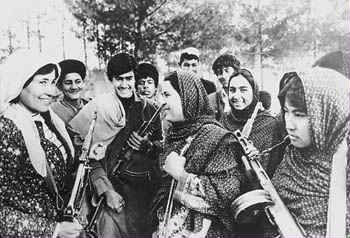 Women fighting on their own behalf joined pro-communist Afghan militia, during a progressive revolution that began there in the late 1970s.

Right now U.S. politicians from both big capitalist parties are debating in the corporate media over who deserves the blame for the U.S. defeat and its precipitous withdrawal. Both these parties ordered and endorsed the U.S. intervention, as did the Pentagon and the intelligence services, starting in 1978. Both Trump and Biden agreed to leave.

No working person, no oppressed people in the United States, no person sympathetic with colonized people or with women should be fooled into thinking that this ruling-class debate has any relation with guaranteeing the rights or livelihood of any Afghans, including women.

The debate is over what strategy and tactics protect the pillage and profits of the U.S.-based banks, industrial and mining monopolies. These businesses grab the natural resources and exploit the labor of the entire Central and Western Asian region near Afghanistan. Led by the U.S. military-industrial complex, these capitalist exploiters have milked the federal treasury of trillions of U.S. dollars.

The massive U.S. intervention in Afghanistan began in the late 1970s, following a progressive revolution that deposed the Afghan king and tried to bring land reform to the countryside and socialism to the cities of their country.

That Afghan revolution, led by communists, immediately lifted the position of Afghan women, who served in its forefront as leaders, teachers and soldiers to defend their newly won rights.

The U.S. government reacted by providing arms and funds to Afghanistan’s landlord class and weapons to the Afghan local rulers known as warlords — they were a feudal version of the Pentagon’s warlords. The warlords and the reactionary mujahedeen used these U.S. weapons to murder the women teachers and their students.

When the Afghan revolutionary government asked the Soviet Union for aid against the reactionaries, Washington tripled down on sending its arms to the worst elements in Afghanistan.

No one in Washington complained in those days that the Afghan reactionaries they armed squashed women’s rights.

U.S. diplomats mobilized the Saudi kingdom to pay for the arms and Pakistani militarists to deliver them. Cold War strategists saw the conflict in Afghanistan as an opportunity to drain the USSR. Zbigniew Brzeziński — U.S. national security adviser to President Jimmy Carter — made this clear that he even considered the later casualties of Sept. 11, 2001, as worthwhile, as it helped the U.S. bring down the Soviet Union.

It is remarkable, and a telling contrast with what is happening today, that after the Red Army withdrew from Afghanistan in 1988-89, what remained of the revolutionary government was able to hold out in some of the major cities until 1992. This resistance proved that, for over a decade, the Afghan revolution had a solid, heroic and self-sacrificing base, even if it only had control over a small part of the territory. ( See workers.org/2021/07/57380/, originally published 1996.)

The various warlords and other reactionary groups fought among themselves and were unable to take Kabul decisively until 1996. By that time the Taliban, a reactionary group of young people centered in Islamic schools, received enormous aid from the Pakistan secret service and was able to seize power in the country.

The first U.S. reaction was to engage with the Taliban, despite this group’s oppressive program regarding women. In the end, Washington was unable to establish a stable alliance or tutelage.

Osama bin Laden’s al-Qaeda organization, one of the groups the CIA armed during the anti-Soviet war, was based in Afghanistan as a guest of the Taliban. Following the 9/11 attacks, the Bush administration seized on al Qaeda’s presence there as an excuse to invade Afghanistan — and immediately began preparations to invade oil-rich Iraq.

No Afghans and no Iraqis were involved in the attacks on the World Trade Center and the Pentagon — and that’s according to Washington itself. The Bush administration, with support from the Democrats, used the attacks as a pretext for the “War on Terror.”

What this really meant — and Washington’s strategists made this clear in their papers on U.S. strategy — was that without a Soviet Union in its way, the U.S. planned to dominate the world for the coming century, using its military and economic power. The first steps were aimed at reconquering those countries in the Central and Western Asian region that had won some sovereignty in the period after World War II.

Instead of the grandiose plans of the so-called “neocons” — Donald Rumsfeld, Dick Cheney — the result of the “War on Terror” has been a series of setbacks for U.S. aggression. Unfortunately, even in defeat the Pentagon has inflicted misery on tens of millions of people.

The U.S. interventions brought chaos and misery to millions of Afghans, Iraqis, Syrians, Libyans and — through its clients in Saudi Arabia and Israel — to millions of Yemenis and Palestinians. Washington’s economic sanctions extended the suffering to Iran and Lebanon.

But U.S. intervention has been marked by U.S. military and diplomatic failure.

People may ask why the Afghan revolution was able to defend Kabul without Soviet troops present from 1989 to 1992, yet the U.S. puppet government today has fallen apart in weeks.

The limited support for the U.S. occupation came from only a narrow range of those who could take advantage of the wealth and arms poured into the country. Of course the most corrupt elements come from the U.S. and West European criminal monopolies, especially the arms industry. The current rapid collapse mirrors the disastrous impact of the Pentagon in the entire region.

Progressive people in the U.S. must fight to make sure the U.S. leaves Afghanistan quickly and to oppose any new military intervention — and fight to end all sanctions, in Afghanistan and in the region.

Many in the corporate media erroneously compare the events in Kabul with the rapid victory of the liberation forces in Saigon, Vietnam, in 1975. Those events, however, besides driving out the U.S., brought a progressive government to power. That contrasts with the current events in Afghanistan.

Nevertheless, getting the U.S. out is a step forward. Any progressive steps in Afghanistan can only be accomplished by the people who inhabit the region. There is no way U.S. imperialist intervention can defend the rights of Afghans.