This article, which has been slightly excerpted, was first published in Workers World, August 13, 2015. 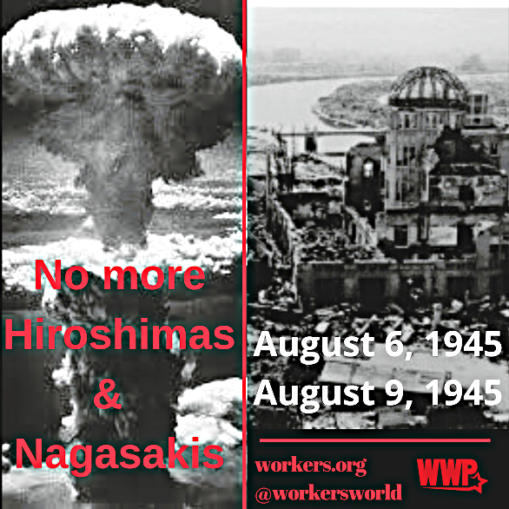 On the 70th anniversary of the mass murders of the civilian populations of Hiroshima and Nagasaki in Japan, on Aug. 6 and Aug. 9, respectively, a discussion in the U.S. corporate media centered on the following question: Did the bombs force a Japanese surrender and avoid U.S. casualties?

Historic studies have shown this to be the U.S. pretext, rather than the reason for using the bombs. Photographs show the horror. Here focus on the following questions: What was the class character of the two principal regimes fighting this war in the Pacific? What were their goals? Why did their confrontation lead to Washington using unspeakable weapons against a civilian population?

Both the U.S. and Japan were imperialist countries. Both had capitalist economies, with wealth concentrated in a small number of ruling-class families in industry and banking. These ruling classes exploited the working classes at home. Japan ruled Korea and parts of China, where its ruling class invested capital, exploited local workers and looted raw materials. The U.S. ruled the Philippines, Puerto Rico and Hawaii, where it did the same.

For U.S. imperialism, the goal was to smash the Japanese state so thoroughly that it would be subservient to Washington in the region. Today, U.S. imperialism still wants hegemony in that region, but this time with a rearmed Japanese ruling class as a junior partner in an alliance against People’s China.

As communists in the U.S., we focus on the crimes of U.S. imperialism. In World War II, the ruling class used the vilest chauvinist and racist propaganda against the Japanese people, portraying them as subhumans, to mobilize the population to go to war and kill Japanese. These included interning people of Japanese ancestry in U.S. concentration camps and firebombing and atomic bombing Japanese civilians.

The U.S. military learned how incendiary bombs can destroy cities from the British-U.S. attack on Hamburg in July 1943 that killed 43,000 German civilians and from the one on Dresden in February 1945 that burned or asphyxiated between 30,000 and 90,000 people, mostly refugees.

After the U.S. had captured islands close to the main Japanese islands, the Air Force opened an incendiary bombing campaign that struck 68 Japanese cities, killing hundreds of thousands of people.

U.S. imperialism’s first atomic bomb was detonated in a test on July 16, 1945. The U.S. ruling class did not hesitate one second to use this weapon against Japanese civilians if it believed this was effective in promoting its property interests and its profits.

Hiroshima and Nagasaki were two of the few Japanese cities spared in the earlier firebombing campaign. They had no military value. With the war due to end soon in the Pacific — it ended in Europe on May 8 — Washington had a small window to test the two different types of nuclear-fission weapons, one made with enriched uranium and the other with plutonium.

In these two untouched cities, the U.S. could observe what the weapons did, as they killed 200,000 people quickly and another 150,000 slowly.

The U.S. military could show the world what it was capable of. It later openly used the threat of nuclear bombs during the wars against Korea and Vietnam.

The Japanese rulers, who already knew they were defeated, faced what they saw as an even greater threat than the A-bombs. The Soviet Union, a workers’ state, had just declared war. Wherever the Soviet Union occupied, it threatened not only Japanese sovereignty but the property rights of the Japanese ruling class.

Although they hated to surrender to anyone, the Japanese rulers preferred to submit to the capitalist United States rather than to the socialist-oriented Soviet Union. Under the U.S. occupation of Japan, which lasted until 1950, Gen. Douglas MacArthur repressed the Japanese Communist Party and the trade unions.

Where the Soviet Red Army marched in and helped force out the Japanese — in Manchuria, which is part of China, and northern Korea — the people freed themselves from Japanese imperialist rule and seized the property of the landlords and capitalists. That’s what the Japanese rulers feared more than the atomic bombing of their population.