In a stunning announcement Aug. 5, China’s President Xi Jinping informed the First International Forum on COVID-19 Vaccine Cooperation of the country’s donation of 2 billion doses of COVID-19 vaccines to developing and poor countries within the next four months. This urgent step builds solidarity and makes vaccines accessible in the developing world. 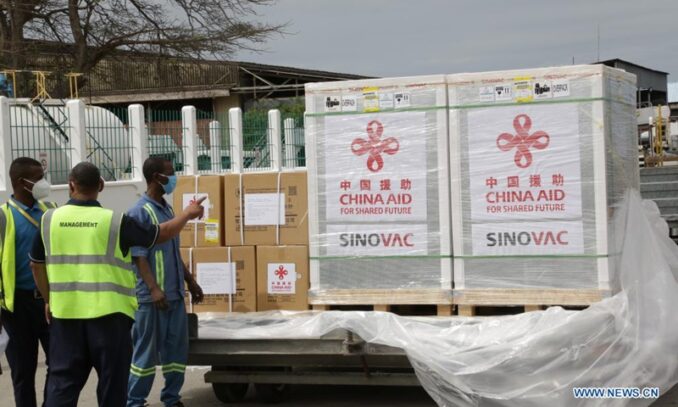 Most significant was China’s message that, through cooperation and sharing of resources, skills and technology, many countries could develop overseas production of China-developed vaccines. Increasing local production capacity will save time, lives and costs of international transportation.

The decision to share technology and help countries produce their own vaccines puts China on a collision course with the World Health Organization. WHO is dominated and significantly funded by the one of the world’s wealthiest individuals through the Bill & Melinda Gates Foundation. Gates is committed to protecting patents, even in lifesaving essential medicines. Developing global production capacity is deeply threatening to U.S. corporations.

CGTN, a Chinese media source, explained the significance of the Forum transferring technology to developing countries and helping these countries establish domestic production lines. It is the difference between giving a supply of fish and teaching countries to fish. This is the best protection now and in the future, as other possible pandemics develop.

Meeting the challenge is much more complicated than delivering palettes of vaccines on the tarmac. Complex logistical problems of storage, transport and need for skilled medical technicians and administrative personnel must be quickly solved. Raw materials and industrial technology are essential. Beginning concrete planning was the purpose of the Aug. 5 international forum, hosted by China’s State Councilor and Foreign Minister Wang Yi, and attended via videoconference by 30 countries.

The U.S. corporate media, only capable of viewing the world from a capitalist perspective of competition, immediately took aim at China’s announcement of 2 billion vaccine doses and questioned its motives. They did not, however, question the capacity of China to accomplish these goals.

That is a mere 5% of the 2 billion doses from China. Nevertheless, the Aug. 3 White House press release bragged that the donation “cements the United States as the global leader in COVID-19 vaccine donations,” and that this amount is “more than the donations of all other countries combined and reflects the generosity of the American spirit.”

Biden’s announcement was uncritically reported by U.S. corporate media, without bothering to fact-check this wildly exaggerated declaration on the significance of 110 million doses to 65 countries. China has already distributed 750 million doses to 104 countries and has publicized this widely. The 2 billion doses announced Aug. 5 is in addition to the huge amount already delivered. (Global Times, Aug. 5)

The White House statement, misleading and fraudulent, reflects the U.S. ruling class’ determined refusal to acknowledge China’s accomplishments in battling COVID within China and in helping the world deal with the pandemic.

It is seldom mentioned in the U.S. media that the U.S. still has the largest number of COVID deaths of any country — 631,000 at this writing. A comparison to China’s 4,638 deaths is not included. Now the same numbers game is being played around sharing vaccines with the world.

Protecting patents at all costs

The corporate media distorts and hides facts and figures, because enormous pharmaceutical profits are at stake.

Washington is feeling the global pressure to share resources and vaccines and suspend “intellectual property” (IP) rights on COVID vaccine patents. But the pharmaceutical companies remain determined to protect private patents, a fabulous source of guaranteed profits far into the future. They are threatened by even a temporary interruption of IP protections.

A capitalist government exists to protect the “rights” of corporations to maximum profits. This is considered more sacred than the human right to live. Pfizer and Moderna raised the cost of their vaccines — Pfizer by more than 25%.

With the U.S. government buying tens of millions of doses, there are vast profits to be made. Pfizer spent $3 billion on vaccine research but stands to make $26 billion in vaccine sales in 2021. Pfizer’s research investment was more than covered by $12 billion in government subsidies. (Reuters, May 4)

Big Pharma has used its enormous power to block countries in the Global South from developing alternative vaccines. In October 2020, as the full impact of the global pandemic was being felt, India and South Africa put forth a radical proposal to the World Trade Organization: Everyone should be allowed to manufacture the vaccine without penalty.

The proposal for a patent waiver was rejected at the WTO by Bill Gates and all the wealthier capitalist countries including the United States, the European Union, Britain and Switzerland, countries that are home to major pharmaceutical companies. All these countries enjoyed early access to the vaccine.

Pharmaceutical companies in the U.S. and in other imperialist countries have made billions in profits during the AIDS scourge, which takes an especially heavy toll in Africa. The Gates and other foundations established by multibillionaires are used to defend monopoly medicine while masquerading as saviors.

Because Gates’ own fortune is built on IP, specifically copyrights and patents associated with Microsoft products, Gates has used a portion of his vast corporate wealth to ensure protection of all patents.

The Gates Foundation is the second largest donor, after the U.S., to the World Health Organization. Gates’ views have an outsized influence. Of course, the U.S., Britain, Germany and the other largest funders are all committed to keeping medical technology in private corporate hands.

They prioritize capitalist ownership first and health care in the formerly colonized world a distant second. Less than 2% of Africa’s 1.3 billion people are fully vaccinated.

This is the dual role of all corporate foundations. Foundations such as Bill & Melinda Gates Foundation keep prices high by purchasing medications and donating them, while protecting patents or IP, along with their reputation. With a great deal of publicity and hype, the Gates Foundation claims to combat polio, malaria and AIDS in Africa, but their handouts do not develop essential health infrastructure.

Increasingly health advocates are focusing on the role of Bill Gates and Big Pharma in entrenching deadly vaccine apartheid. “Gates pushed through a plan that would permit companies to hold exclusive rights to lifesaving medicines. . . . Given the enormous influence Gates has in the global public health world, his vision ultimately won out in the COVAX program — which enshrines monopoly patent rights and relies on the charitable whims of rich countries and pharmaceutical giants to provide vaccines to most of the world.” COVAX deceptively describes its goal as “working for global equitable access to COVID-19 vaccines.” (Wired, May 19)

The early hopes of a cooperative collaboration and information sharing in a united effort against the virus crashed against the capitalist rocks of IP rights and proprietary science.

China’s determination to share vaccine technology is a fundamental challenge to corporate domination of technology.

The differences between two global choices are sharpening. Cooperation and sharing scientific information and technology are the only way forward.