The boss of Amazon is probably one of the most unpopular capitalists of all time. As Jeff Bezos prepared to zoom off into outer space, some 200,000 people signed an online petition insisting he not return. People hate Bezos for the way workers are mistreated at Amazon. 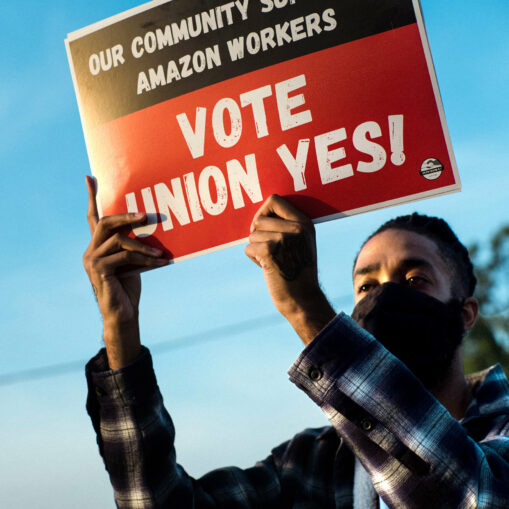 A union supporter during the organizing campaign at Amazon in Bessemer, Ala.

But public opinion is never enough for labor to win justice from capital. It takes a massive struggle to beat a massive corporation.

Struggles have their ups and downs, and April 9 — the day the National Labor Relations Board announced the Retail, Wholesale and Department Store Union lost a representation election in Bessemer, Ala., by a wide margin — was a major down. But after listening to testimony from dozens of courageous union supporters about Amazon’s vicious union-busting tactics, the NLRB’s hearing officer recommended Aug. 2 that the election results be thrown out and a new election ordered.

The testimony, documenting numerous illegal unfair labor practices, was damning. The company asked the U.S. Postal Service to erect a mailbox right outside the warehouse, where there could be surveillance of workers mailing their ballots. There was unfair discipline of pro-union workers. Misinformation propaganda was widespread.

The hearing officer’s recommendation will go to the Labor Board’s Region 10 Director in Atlanta, who has the power to force another election. It is not known when that ruling will be issued or what will happen if Amazon appeals an order for a new election.

With large unions such as the Teamsters, Service Employees Union and United Food and Commercial Workers all preparing to launch organizing drives among Amazon workers, now the NLRB is feeling pressure from the working class to rule in its favor.

Bessemer union busting the rule, not the exception

Meanwhile, an NLRB investigation found there was illegal interference with union organizing at Amazon’s JFK8 warehouse in Staten Island, N.Y. A young union organizer for the Amazon Labor Union — which is not affiliated with any major union — was prohibited from distributing pro-union leaflets in a break area. A security guard confiscated Connor Spence’s leaflets.

Yet Staten Island workers are not intimidated. On Aug. 11 the Amazon Labor Union will hold a press conference outside the warehouse to announce that 1,000 workers have signed cards saying they want the union to represent them. This is a big step forward in a short time to winning the 5,000 JFK8 workers to the need for unionization.

Chris Smalls, who was fired last year for organizing a walkout at JFK8 over lack of COVID protections, is a leader in the that union campaign.

These combined developments underscore what some Bessemer organizers were saying right after the setback April 9; this is just the beginning of a protracted struggle to organize Amazon.

Now is the time for RWDSU to reinforce and broaden its base of support in Bessemer and push back against Amazon’s lies and intimidation. All the unions that want to represent Amazon workers should seize the moment and take the offensive.

A range of tactics beyond an electoral strategy must be considered. At their 2021 Convention, the Teamsters raised the option of bypassing the NLRB election process and striking for union recognition. This is a more militant tactic sometimes employed when a majority of potential members have signed union representation authorization cards. The union demands recognition; if the company refuses recognition, workers strike.

When dealing with Amazon, a monstrous and highly exploitative corporation with a hard line against unions, the strike weapon needs to be in every union activist’s tool kit.