Florida’s Republican Gov. Ron DeSantis’ role with regard to COVID-19 deserves a closer look, as it affects the overall approach to the pandemic. DeSantis is poised to run for reelection in 2022. Reports in the media say he’s aiming for the presidency in 2024. 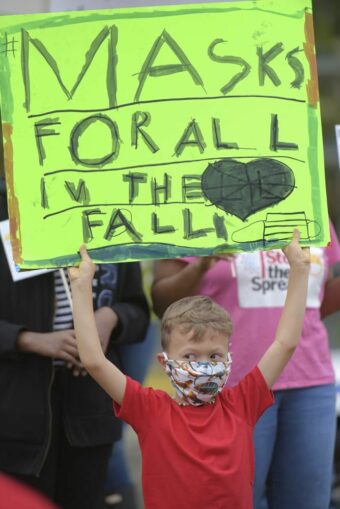 About 50 people gathered outside the Duval County School Board building Aug. 3 in Jacksonville, Fla., to support having mandatory masking for teachers and students.

His statements in the first week of August indicate that DeSantis is playing politics with the pandemic in the hope that his posture of empty bravura promotes his climb. It’s another example of reactionary ideology trumping science and reason.

DeSantis’ difficulty is that the pandemic’s fourth surge is setting daily records in Florida, the state with the most children hospitalized from the disease. His boastful show of “courage” threatens Florida’s children, especially those less than 12 years old, for whom vaccines have not yet been approved.

DeSantis is far from the only capitalist politician holding an executive position who has made decisions threatening the population who elected them. All capitalist politicians are caught in a contradiction; they serve the bankers and the billionaire ruling class, who demand the economy be up and running as before and damn the casualties. Plus they’re all happy to accept government subsidies for big capital and deny them to the workers.

This contradiction upends any approach that gives priority to saving lives and serving the population and leads to ignoring public health measures.

Whether Democrat or Republican, nearly all governors have pushed to reopen business, as soon as there was any slowing of the pandemic spread. And so far, each rush to reopen business has been followed by another surge of COVID-19, the latest one driven by the more transmissible Delta variant of the virus.

DeSantis, Texas Gov. Greg Abbott and some others, perhaps inspired by the excesses of the last president, have mishandled the pandemic with such anti-worker and racist prejudice that they make the Democrats look reasonable, if only by comparison.

DeSantis currently leads a crusade that identifies the choice to go unmasked as a fundamental human right. Not only does DeSantis oppose requiring masks, he pushed through a law in Florida making it illegal for local school districts or local governments to demand people wear masks indoors.

Perhaps DeSantis will next revoke the traffic signs controlling speed in school districts as interfering with the “god-given right” to drive automobilies at 120 mph.

When Joe Biden called out DeSantis for his anti-scientific policies, the Florida governor retaliated in racist Trumpite fashion. He attacked migrants from south of the border. He attacked Biden for opening the border and promoting the pandemic.

Fact: The U.S. pandemic surge is far from those borders and has nothing to do with migrants from Mexico. Besides, Biden’s policies are as restrictive and anti-migrant as Trump’s were, just with less racist rhetoric.

Since Florida leads the country in the hospitalizations of children for COVID-19, DeSantis’ political posturing has pushed him into the national spotlight. Teachers, teachers’ unions, organizations of parents of children with disabilities have all spoken publicly and said that mandating masks for all pupils can make the schools a safer place for all. Public health officials agree.

Phony heroics in defense of phony individual freedom do nothing to counter the virus. The blatant rants of DeSantis and the other Trump clones must be cleared away to expose the failure of the capitalist system — and all its representatives — in dealing with the larger crises humanity faces. These crises can only be resolved by establishing a system driven not by profit, but by satisfying human needs.