Gathered outside the world headquarters of the Aramark corporation in Philadelphia Aug. 7, around 20 demonstrators denounced that company and several others that profit heavily from the prison-industrial complex. 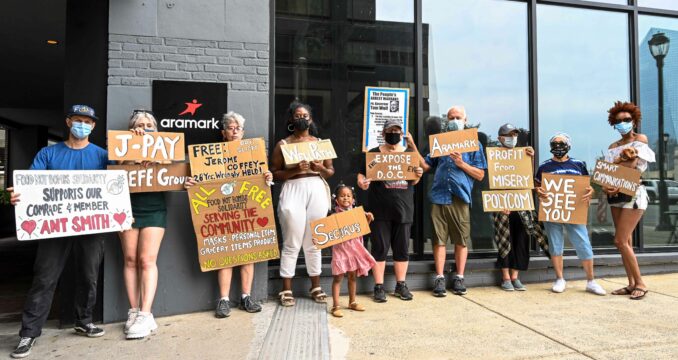 The action was called to show how all aspects of an incarcerated worker’s existence are privatized under the Pennsylvania Department of Corrections.  Aramark is a $15 billion Fortune 500 global corporation that currently holds the contract to provide food to prisons in the PA DOC system.

Miller read a statement from Jerome Coffey, an incarcerated activist at S.C.I. Pine Grove and a member of two of the sponsoring groups.

“We need to stop Secretary Wetzel, who is retiring in October, from negotiating a new contract with Smart Communications. It’s all about profit.”

Miller quoted Dr. Amos Wilson, who said, “If you want to understand any problem in America, you need to focus on who profits from that problem, not who suffers from that problem.” (tinyurl.com/utdbphu6) She went on to describe how the “food” provided under Aramark’s contract with the PA DOC, budgeted at 99 cents per meal, consists mostly of high-calorie bread, pasta, cake and sweetened drinks, with few fresh fruits or vegetables.

Miller called out other corporations that profit from the prisons: “Global Link Technologies gets 50% of its business providing 15 minute calls to incarcerated people, records the calls and stores the data.” Corizon, now known as Wellpath, profits from medical video conference visits, previously charging $5 a call to incarcerated people earning 19 cents an hour. The company temporarily suspended this cost, but still charges $5 for doses of “medication” — usually a few tylenol capsules. Other predatory companies mentioned include Securus Technologies, Polycom, JPay and Keefe Group.

Miller noted that the PA DOC gets a kickback from commissions with most of these corporations.

Representing the Human Rights Coalition, the Abolitionist Law Center and Philadelphia Jericho, Saudia Durrant described numerous letters her groups have received from incarcerated people in Pennsylvania prisons, describing horrific and torturous conditions: “If they want phone privileges, they are forced to fight with each other to entertain the guards. People on suicide watch are pepper sprayed. The prison officials and guards are modern-day plantation owners and overseers. They take people and disappear them into prison warehouses, where they can exploit them.

“Prisoners in a long-term solidarity unit went on a hunger strike recently to denounce these conditions. How horrific is it that people who are being ‘punished’ are subjugated to cruelties and torture by state authorities, who by law are supposed to be ‘rehabilitating’ them. We need to tear down every last brick in these prison walls until every prisoner is free.”

Betsey Piette, with Workers World Party, described how CoreCivic and Geo Group profit from selling prison beds to state and federal agencies, including the U.S. Immigration and Customs Enforcement. Asantewaa Nkrumah-Ture, with Black Alliance for Peace, denounced Aramark, with almost $13 billion in 2020 revenue, for underpaying its workers.

YahNé Ndgo, also with BAP, reminded rally participants that Aug. 7 marked the anniversary of the assassination of 17-year-old Jonathan Jackson for trying to liberate his brother George Jackson and other freedom fighters in 1970. “Black August is a time to remember our martyrs and revolutionaries.”

The event was recorded by Unicorn Riot, which reported over 10,000 Twitter Live viewers, and 1,000 hits to the YouTube video. (tinyurl.com/jw8mb3h7)