Did you know the month of August holds special meaning for the Black Liberation struggle? This August marks the 402nd anniversary of the arrival of the first ship of Africans brought in chains to the shores of the British colony of Virginia in 1619. This August makes 244 years of enslavement since establishment of the U.S. state — with its countless injustices, brutality and institutionalized crimes against humanity. Those atrocities continue in this white-supremacist, capitalist society to this day. 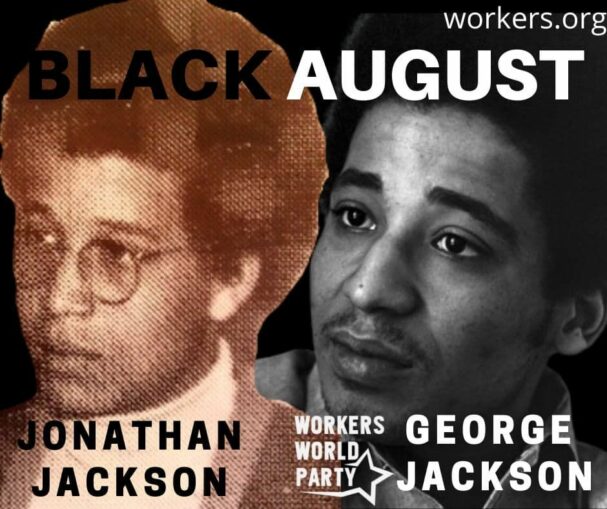 But August is also a time to commemorate the Black Resistance Struggle from the Haitian Revolution of 1791-1804 to the Nat Turner Rebellion in 1831, from the Fugitive Slave Law Convention of 1850 to the Underground Railroad that ran late 18th century to 1865, from the Brotherhood of Sleeping Car Porters in 1925 to the March on Washington in 1963, the Watts Uprising in 1965 and the National Prison Strike from Aug. 21-Sept. 9 in 2018.

A number of freedom fighters were born in August, including Marcus Garvey, Fred Hampton and Russell Maroon Shoatz, while a number died in that month: W.E.B Du Bois, Huey P. Newton and Jonathan Jackson. Jackson was killed Aug. 7, 1970, while attempting to free the imprisoned Soledad Brothers, who included his brother, Black Panther leader George Jackson. One year and two weeks later, on Aug. 21, 1971, George Jackson was executed by prison guards. His assassination was an important spark leading to the heroic Attica Prison Rebellion in September 1971.

Workers World depends on your help. The WW Supporter Program was founded 44 years ago to help build this revolutionary socialist paper. Since the early 1990s, the fund has supported the website workers.org., where articles from the newspaper are posted daily and where the PDF file of the weekly paper is posted. The paper is now being printed and mailed out once a month.

For a donation of $75 to $100 to $300 a year, members receive a year’s subscription, letters about timely issues and one, two or three free subscriptions, respectively, to give to friends. Supporters can receive a copy of the book, “What road to socialism?” (Notify us.) Or read it for free at workers.org/books.

Write checks, either monthly or once a year, to Workers World and mail them with your name and address to 147 W. 24th St., 2nd Floor, New York, NY 10011. Or sign up to donate online at workers.org.