Haitian authorities have arrested Colombian mercenaries and Haitian-Americans and charged them with participating in the July 7 assassination of Haitian President Jovenel Moïse. But murky questions still remain: Who organized the attempted coup? Who paid the mercenaries? Who will benefit? 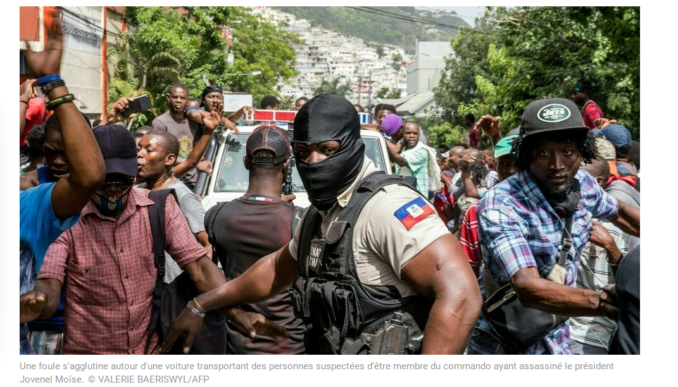 In Haiti, a crowd gathers around a car carrying the arrested suspects in the assasination of President Jovenel Moïse. Credit: Valerie Baeriswyl

Moïse was the only person killed in the attack, although his wife was shot and left for dead. None of the president’s guards were injured, yet leaders in the guard corps were left unquestioned for days after the assault.

Previously, the United States had put Moïse’s mentor, Michel Martelly, and his Haiti Tèt Kale Party into the presidency. Then Trump and later Biden made it clear they firmly supported Moïse. But Washington may still take advantage of his disappearance.

With U.S. support, Moïse had hollowed out the Haitian government by refusing to hold elections. The result: Moïse ruled by decree while almost every other Haitian official — except for 10 senators — lost their mandate to govern.

The main political question facing Haiti now is how new elections are going to be organized — and who runs the country until elections take place. Both Claude Joseph, appointed prime minister by Moïse in April, and Ariel Henry, slated by Moïse to replace him, have close ties to Washington. Joseph has been acting as interim president since the assassination.

On July 18 the Core Group — a U.S.-led imperialist alliance for intervention in Haiti — issued a statement recognizing Ariel Henry as acting prime minister and calling on him to form a government to hold fair and free elections. The group includes the ambassadors of the U.S., France, Germany, Spain, Brazil, Canada, the European Union and representatives from the United Nations and the Organization of American States. (tinyurl.com/umzxjeh6, Haiti Libre, July 18)

Political maneuvering will continue. The lines are being drawn more sharply.

Haiti’s other crises: the economy and COVID-19

Fully one-third of Haiti’s economy is based on remittances from Haitians living and working in the United States. A large majority of Haitians survive on less than $2.50 a day, and 42% are food insecure. The latter frequently face acute hunger, even if not actually dying from lack of food — yet.

Over the past three decades, U.S. imperialism has fostered and imposed political instability in Haiti. Washington twice deposed the popular President Jean-Bertrand Aristide, while relying on despots and autocrats to keep refugees from fleeing to the U.S. and keep a lid on mass protest and organizing. None of these measures have resolved the country’s grave economic problems.

Health conditions and medical care in Haiti have been in dire straits during the pandemic. Haitians received COVID-19 vaccinations for the first time July 16 — given to 38 health workers and elderly people at a Port-au-Prince hospital. As of July 19, Haiti has had 20,000 cases and over 500 deaths from COVID. Since a test for the virus in Haiti costs $60 to $90, and most people earn less than $2.50 a day, these numbers must be vast undercounts. (worldometers.info)

Currently Cuban doctors and medical workers provide most medical care in Haiti. Cuba’s aid to Haiti over many decades has been monumental, as CounterPunch documented in 2010. (tinyurl.com/msjeuxhe) From 1998 to 2010, Cuba performed over 207,000 surgeries, restored eyesight to 45,000, made 14.6 million patient-doctor consultations, taught over 100,000 how to read and helped in the birth of 100,000 children.

In the aftermath of the 2010 Haiti earthquake, Cuba was among the first responders, sending medical teams that saw hundreds of thousands of patients and performed tens of thousands of surgeries.

The COVID-19 vaccines sent to Haiti come from the U.S. and were developed by U.S. pharmaceutical giants bent on profit. Within Haiti’s context of imperialist and capitalist domination, it is unlikely the U.S. will let its vaccines be distributed by Cuban medical personnel.

Revolutionary Cuba’s history of solidarity with Haiti offers the possibility of another kind of future, a different choice for a country at the crossroads and in crisis.