Protesters marched through Portland, Oregon’s Saturday Market July 17 chanting “U.S. Out of Cuba! Hands Off Haiti!” They joined progressives around the world who are protesting U.S. attempts to destabilize Cuba. The Portland activists handed out informational leaflets condemning the U.S. Congress for recently adding $2 million to the more than $20 million Washington spends trying to instigate counterrevolution in Cuba. 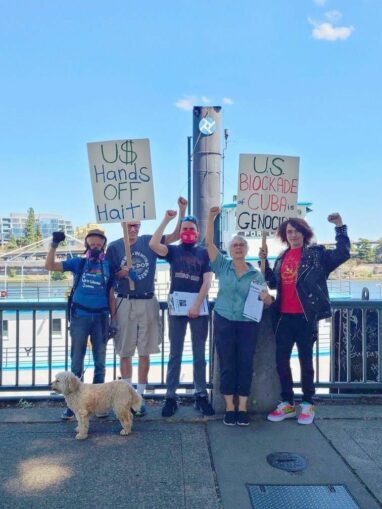 The Atlanta branch of Workers World Party issued a call to several progressive organizations, proposing they join together to organize a rally July 17 in support of revolutionary Cuba and the popular resistance in Haiti. Members of many groups responded and demonstrated under the slogans: “End the U.S. blockade of Cuba Now!” and “No U.S. intervention in Haiti!”

Activists within the multinational crowd held banners and signs along Buford Highway, a busy thoroughfare near the main entrance to Plaza Fiesta in Atlanta. Their signs and chants engendered a positive response from riders in passing cars, who honked in solidarity.

Representatives of many organizations spoke and urged rally participants to remain vigilant in opposing pro-imperialist propaganda being whipped up by the corporate media against socialist Cuba. They called for solidarity with the people of Haiti and demanded that the U.S. stay out of the Caribbean country.