On July 16, by order of Texas Governor Greg Abbott, the state Department of Criminal Justice (TDCJ) began clearing incarcerated people from the Dolph Briscoe Unit in Dilley. But the order did not mandate release of any people or the closing of the prison.

Instead, under “Operation Lone Star,” the facility was cleared to be reused for holding migrants arrested by the Texas Rangers — not for crossing the international border but on the pretext of them committing low-level offenses.

Operation Lone Star was announced in March as a joint plan of Abbott’s office and the Texas Department of Public Safety (DPS) to “stop the trafficking of drugs and humans.” The plan ordered an armed body of men — the Rangers — to round up undocumented people. 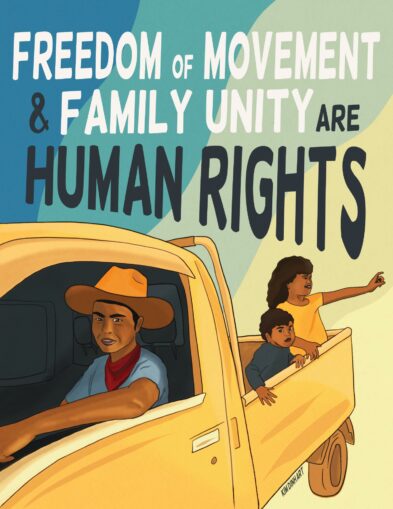 by Kim Dinh for Justeseeds.org

Abbott specified the operation was a response to President Joe Biden’s  administration policies “that refuse to secure the [southern] border and invite illegal immigration.” (tinyurl.com/4z76xv37, March 6)

The Biden administration has not been easy on or even remotely kind to migrants. Vice President Kamala Harris traveled to Guatemala in early June and told people there that any migrants traveling to the U.S. would be turned back at the border.

This violation of international law signals that — contrary to Abbott’s anti-migrant panic — Biden is holding onto the same immigration policies that he previously implemented as part of the Obama administration. As vice president then, Biden helped run the state machine that deported 2.5 million migrants between 2009 and 2015. (tinyurl.com/eesackze, Aug. 29, 2016)

With Abbott’s order, factually incorrect accusations of “insecure borders” from Texas officials are used to torment undocumented people. The fabricated panic over “illegal immigration” is being used to pull $250 million from TDCJ’s budget to fund the Texas border wall. A TDCJ statement announced the money will come from the agency’s 2023 fiscal year budget. (kxan.com, June 17)

Armed bodies of men like the Texas Rangers continue to serve the ruling class now in a very similar way to how the Texas Rangers and other police forces were used in the era of enslavement of African peoples. Police forces in the U.S. originated in slave patrols that rounded up Black people and other people of color for “low-level offenses” such as vagrancy. (tinyurl.com/3tnx9z8y)

The Texas Rangers were originally created by Texas settler Stephen F. Austin in 1823 to make war on the Comanche and Kiowa nations, who were fighting settler incursions in their lands, and against the Mexican “Comancheros” who held trade fairs with the Comanches. And the Rangers were used against Mexican national forces in the U.S. war against Mexico.

Abbott and Trump met at the Texas-Mexico border June 30 to drum up racist support for finishing the wall that damages the environment and the people on both sides.

The crimes of Texas − and the U.S.

In a June 22 interview with the Texas Standard, Keri Blakinger, a reporter for the Marshall Project, explained there are legal and logistical problems with Operation Lone Star’s use of the state-owned Briscoe Unit for federal migrant prisoners. She noted that TDCJ staff are not legally allowed to guard people accused or convicted of misdemeanors, nor is the TDCJ staff trained to work with migrants. (tinyurl.com/ukaw4uvu)

Conditions in migrant detention facilities in Texas are notoriously abhorrent. The Briscoe Unit prison saw an uprising on July 18, 2020, when more than 50 incarcerated people resisted brutal conditions during the pandemic. Blakinger reported that, after the uprising was put down, participants were tear-gassed before being moved to other units located hours away.

The most recent removal of prisoners from the Briscoe Unit has taken a toll on the families of those once held captive there. With some moved hours away, families will no longer be able to visit those being held in extreme isolation.

What is being done to migrants in Texas is a crime and a continuation of ongoing colonial and imperialist violence on this continent. How can there be “illegal immigration” on lands that the U.S. seized illegally from Indigenous nations, and when migrants now are frequently Indigenous peoples fleeing from imperialist-backed violence in their home countries? Where is the justice for Mexican migrants arrested for “illegally crossing the U.S. border,” when the entire western third of the U.S. was stolen from Mexico through imperialist war?

What is clear — whether an administration is Democratic or Republican — is that the U.S. border is being “secured” at the expense of people forced out of their homelands by U.S. policies, both economic and military. These policies ensure that the United States — with all its violent and criminal looting and death-dealing — keeps its capitalist class in charge for a little while longer.

But the people’s history will not be kind to Abbott and his ilk.