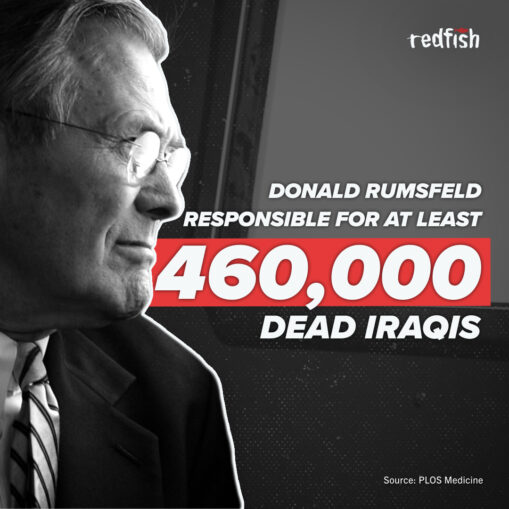 When an ordinary official of an imperialist government dies, since there is usually nothing good to write about them, common practice for a working-class newspaper is to write nothing.

When someone like Donald Rumsfeld dies, to avoid comment means avoiding struggle. Rumsfeld, who died June 30, was far from ordinary. He was a world-class war criminal, who had major responsibility for the murder of millions of people.

That anyone, even in the corporate media, praises Rumsfeld and his work — and they did — should in itself be shocking proof of the criminal nature of U.S. imperialism and its agents.

Architect of U.S. war on Iraq

Along with Bush, Cheney, Deputy Secretary of Defense Paul Wolfowitz and National Security Adviser Condoleezza Rice, Rumsfeld promoted two Big Lies to justify U.S. aggression against Iraq. The first was that the Iraqi government led by Saddam Hussein collaborated with al-Qaeda to attack the U.S. on Sept. 11, 2001. The second was that Iraq possessed “weapons of mass destruction.”

U.S. intelligence agencies had no support for these lies, so Rumsfeld created his own reports. The government figures repeating them knew they were false. Secretary of State Colin Powell, who recited these charges at the United Nations to justify U.S. military action against Iraq, knew there was no evidence and knew the lies were invented to justify the war. (Hal Draper, New York Times, July 16, 2020)

The lies were enough to get backing for the U.S. military to initiate aggression against Iraq, something that Rumsfeld, Cheney, Wolfowitz and other “neocons” had aimed to do as soon as the 9/11 attacks gave them a pretext.

These neocons, with Rumsfeld in a leading role, promoted the U.S. strategy to reconquer those countries — like Iraq, Syria, Libya, Iran — that had won some independence and sovereignty, when the Soviet Union existed as a socialist counterweight to world imperialism.

To rally ruling-class support for what could turn out to be costly as well as criminal, Rumsfeld argued for and put into practice the “shock and awe” strategy. A massive air assault on Iraq, followed by a massive invasion, he said, would bring a rapid victory.

Rumsfeld argued that this ambitious land and people grab could be carried out at minimum cost to the U.S. and its people, and little cost to Iraqi civilians, who would welcome the U.S. assault on Saddam Hussein. Besides being a war criminal, Rumsfeld was dead wrong with this prediction.

In the first weeks of the war on Iraq, even as the Iraqi Army was collapsing, the U.S. invasion force ran into resistance. Workers World newspaper’s analyst Fred Goldstein pointed this out in April 2003, weeks after the invasion began:

“The U.S. military and Secretary of Defense Donald Rumsfeld promised a quick and relatively bloodless war in Iraq. Their plan was based upon a massive ‘shock and awe’ campaign of initial bombing. . . .

“The bombing took place. It produced only resistance. The most overpowering military machine in the history of humanity faced the heroic opposition of the Iraqi people from Day One of the war.”

Only months after the Pentagon’s ‘shock and awe’ air destruction of the Iraqi army and infrastructure, Iraqi guerrillas were inflicting casualties on the 150,000-plus U.S. troops in Iraq in 2003.

During 2004 and 2005, a determined Iraqi resistance was killing and wounding U.S. troops. To avoid defeat in an urban guerrilla war, the U.S. occupation regime resorted to sowing and exacerbating ethnic and religious divisions among the Iraqi people.

All this was under the direction of Rumsfeld and the neocons, whose strategies led to the disintegration of the Iraqi regime and splitting its people. While Rumsfeld’s strategy failed to bring victory to U.S. imperialism, it created misery for millions of Iraqis — misery that continues.

The occupations of Iraq and Afghanistan cost somewhere near $4 trillion. The military-industrial complex grabbed a lot of that in profits, making it understandable why they might praise Rumsfeld. For the working class in the U.S., and especially for the peoples of Iraq, Afghanistan, Syria, Libya and Sudan, he and others following his strategy in the upper levels of Washington can only be considered enemies.

Rumsfeld was equally criminal on a smaller scale in his support for torture during interrogations and his defense of the Abu Ghraib prison in Iraq. His crimes, however, went beyond Afghanistan and Iraq. When it came to illegal aggression, Rumsfeld saw the big picture.

General Wesley Clark, former NATO commander and himself capable of bombing civilians — as his forces did in Yugoslavia in 1999 — claimed in a March 2, 2007, interview on Democracy Now! that he had a memo “that describes how we’re [the U.S.] going to take out seven countries in five years, starting with Iraq, and then Syria, Lebanon, Libya, Somalia, Sudan and, finishing off, Iran.”

While Rumsfeld had to resign in 2006, Libya and Syria were targeted during the Democratic administration that followed Bush; Sudan was split in two, and Iran has been subject to strangling sanctions. Lebanon faces collapse plus sanctions.

Unlike Secretary of Defense Robert McNamara, who eventually regretted his criminal role in pursuing the U.S. war against Vietnam, Rumsfeld defended his murderous policies to the end. The question to ask is what sort of system of government places someone with Rumfeld’s characteristics in a position of power? And how do we rid the world of that system?