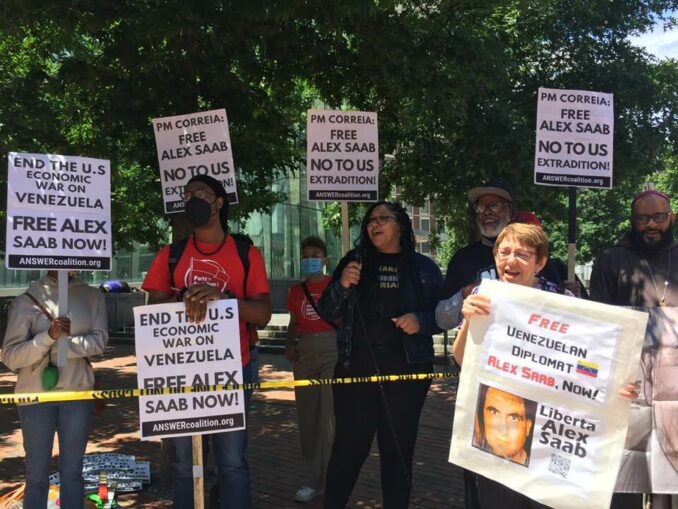 The continuing international Campaign to free Venezuelan diplomat Alex Saab, abducted by the U.S. over a year ago and held in Cabo Verde, gained momentum this week.

The visit of Prime Minister Ulisses Correia e Silva of Cabo Verde — a small, isolated island nation off the West coast of Africa — to the Cabo Verdean community in the Boston area brought out members of that community, along with Venezuelan solidarity activists, union members and antiwar activists from many organizations, to press for Saab’s release. July 5, the National Independence Day of Cabo Verde, is a highly unusual time for the prime minister to be out of the country.

Prime Minister Correia e Silva also met with U.S. officials in Washington, D.C. Coincidentally — or probably not — the U.S. had just announced plans to invest $400 million in expanding its Cabo Verde embassy. Washington’s motives are suspect, given its push to have Saab extradited to the U.S. The investment amount represents one-fifth of Cabo Verde’s entire GDP.

The arrest of a diplomat for any reason is unprecedented and completely illegal under international law. When Saab was abducted, Venezuela immediately pressed for his release to the African Union. The West African Court ECOWAS, of which Cabo Verde is a member; Swiss courts who cleared Alex Saab of any financial wrongdoings; and the United Nations Human Rights Committee have all called for Saab’s immediate release. (telesur, June 8)

Alex Saab was on a humanitarian mission to Iran to purchase desperately needed food and medical supplies for Venezuela. Due to the U.S. sanctions, the Venezuelan economy is reeling economically. Freely accessible food and free medical care were big accomplishments of the Bolivarian Revolution. These gains are what U.S. imperialism is determined to destroy.

A delegation to Cabo Verde in early June of Cabo Verde citizens Bishop Filipe Teixeira and Pericles Tavares, accompanied by Roger Harris of Task Force on the Americas and Sara Flounders of the International Action Center, met with Saab’s attorneys, filed habeas corpus motions with the Supreme Court of Cabo Verde and saw where Saab is being held.

Delegations in June visited the Cabo Verde Consulate in Boston, the Cabo Verde Mission to the U.N. in New York City and the Embassy of Cabo Verde in Washington, D.C. They delivered the international statement with over 15,000 signatures, along with the rulings from the U.N. Human Rights Committee and other international bodies.

Members of the Boston School Bus Drivers Union, Steelworkers Local 8751, were present at the action July 5. USW Local 8751, which has a large Cabo Verdean membership, unanimously passed a resolution May 26 calling on President Joe Biden to drop the demand for Saab’s extradition and for Cabo Verde to release Saab to Venezuela immediately.

The international campaign opposing the illegality of the sanctions and the further criminal conduct of kidnapping a diplomat continues to grow. To sign the international appeal go to bit.ly/FreeAlexSaabVZ.