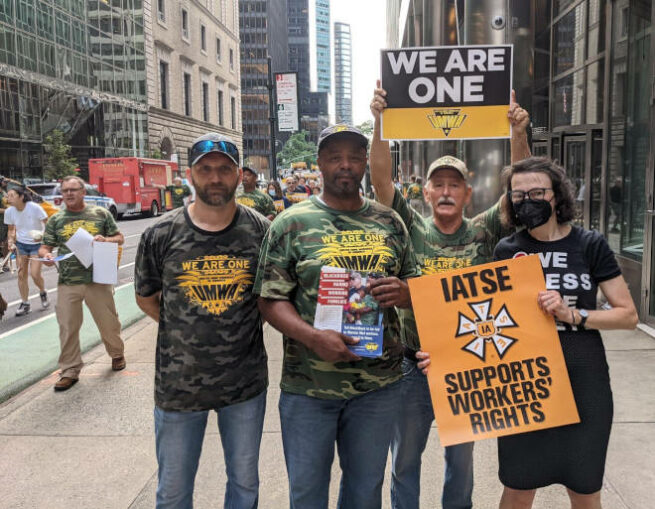 A delegation of striking Alabama coal miners marched on Wall Street June 22 to protest the crushing grip of big business on their lives. The miners — chanting “No contract, no coal!” and “Warrior Met Coal ain’t got no soul! — picketed the offices of BlackRock Fund Advisors, State Street Global Advisors and Renaissance Technologies, investment firms that back the coal company.

The 1,100 members of United Mine Workers, Local 2245 in Brookwood, Ala., have been on strike against Warrior Met Coal, Inc. since April 1. The company produces coal in high demand for steel production in Asia, Europe and South America. BlackRock Fund is Warrior Met’s largest stockholder, providing a capitalist structure that pays corporate executives millions, while miners struggle to survive black lung and murderously dangerous equipment.

The miners are striking in an attempt to gain safe working conditions, adequate health insurance and a wage increase promised five years ago when they took drastic cuts to save the company from bankruptcy. The UMW says contract negotiations are stalled because of pressure from the big investment firms.

This is the first coal strike to hit Alabama in 40 years. But the area has been a UMW stronghold since 1890, independent labor report Kim Kelly told Democracy Now! “Throughout the UMW tenure there, it has been historically one of the most interracial, racially integrated locals in the country. . . . In Brookwood, in the Warrior Met mines, I think the workforce is about 20% Black. And obviously there are women; there are multiple genders involved. It’s not just a bunch of white guys in hard hats, which is the general media image of coal miners. But that’s not who they are. That’s not what they look like. And these folks are working together.” (Democracy Now!, June 22)

The Brookwood mines are in central Alabama, about 30 minutes from Bessemer, Ala., near Birmingham. Thousands of Amazon warehouse workers there were in a fierce but ultimately losing battle to unionize earlier this year. Kelly added: “That part of Alabama, the labor movement has very deep roots, and it intertwines very closely with the Civil Rights Movement and the struggle for Black liberation. This is a much bigger story than just a few people [who] are upset about a contract. There’s a lot of history here.”

Back at home, strikers are on the picket line in 12-hour shifts, 24 hours a day, seven days a week. There have been three separate incidents when cars were driven into workers who were picketing.

In New York City, the miners were joined by Sara Nelson, international president of the Association of Flight Attendants-CWA and a member of the national AFL-CIO Executive Council, and Stuart Appelbaum, president of the Retail, Wholesale and Department Store Union. Brookwood miners supported the RWDSU in its attempt to organize Bessemer Amazon warehouse workers.

For more coverage on the Alabama coal miners struggle, see Workers World, April 2, April 20 and June 2. Hometown Action of Alabama is mobilizing material support for the strikers at tinyurl.com/djrvajnk.