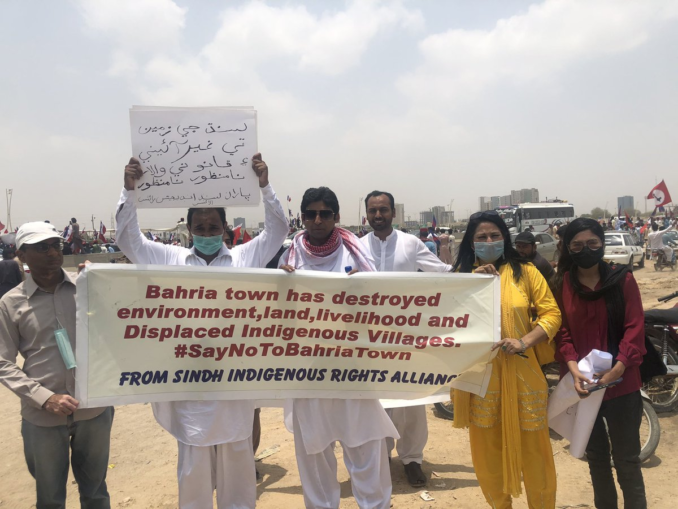 Karachi — On June 6, the Sindh Action Committee organized a protest and sit-in to draw attention to the systematic and continuous violence that Bahria Town Karachi (BTK) inflicted on Indigenous peoples. Dawn reports that up to 10,000 protesters demonstrated outside of BTK’s main entrance gate, condemning the real estate corporation for robbing Indigenous peoples of their ancestral land and forcing them out of their homes. (Dawn, Jun. 21) As the action progressed, chaos ensued within Bahria Town’s master-planned community. BTK’s entrance gate was set on fire, prompting police to unleash terror against the protesters.

Along with dispersing tear gas and shooting rubber bullets at demonstrators, law enforcement kidnapped and caged 150 protesters, including children who were present at the protest. In response to state-sanctioned terror, Karachi Bachao Tehreek (Save Karachi Movement) released a statement to shed light on the events that occurred June 6. KBT explained that the damage that took place “is nothing compared to the loss to [I]ndigenous population of goths [villages], whose land has been illegally usurped, and lives and livelihoods ruthlessly destroyed.”

KBT urged those in solidarity with Indigenous people to focus on the acts of violence carried out by institutions that uphold and maintain oppressive power — the state and corporations.

Since Workers World newspaper last reported on land-grabbing atrocities in Karachi, Pakistan, both state and corporate entities have been working in partnership to restrict the people’s resistance against forced displacement.

On June 14, the Sindh High Court ruled in favor of state and corporate violence and held that the workers’ homes along the Gujjar Nala and Orangi Nala are illegal and removed all stay order protections. Now, 100,000 people — including 21,000 children — face the possibility of becoming homeless. (The News International, Jun. 14) The court’s brutal decision is only one of the many blatant attacks against the people and the people’s power.

KBT reported that police were following affectees who were on their way to the protest in an attempt to prevent them from reaching the protest site. At the sit-in, police continued to terrorize the protesters by kidnapping demonstrators, stealing their banners and posters and pressuring them into going home.

In response to state-sanctioned violence, Awami Workers Party called a countrywide day of action June 28 against land grab and forced displacements — barbaric acts against the people. In observance with AWP’s call to action, protests occurred in Lahore, Karachi, Hunza, Moro, Islamabad, Hyderabad, Ghotki and many other places.

In Pakistan, the political climate is brimming with potential and possibility. Across the country, workers are rejecting the state and corporate entities’ efforts to further encroach on the people’s right to self-determination. The state-sanctioned housing catastrophe was intended to disappear Pakistan’s working class. However, workers refuse to give in to the oppressors’ demands.

Moreover, the demonstrations against forced displacement show signs of a movement in the making. Workers World Party extends deep solidarity to those who continue to resist state terror and who demand dignity and housing for all workers. Say NO to Bahria Town! Housing for All! Build a workers’ world!