Marseille is the second largest city in France. It is a very old city, founded around 500 BCE because it was a great port with an immense hinterland. It is still economically significant; after World War II, it and the surrounding Provence-Alpes-Côte-d’Azur region, were the destination for thousands of migrants, many from North Africa. 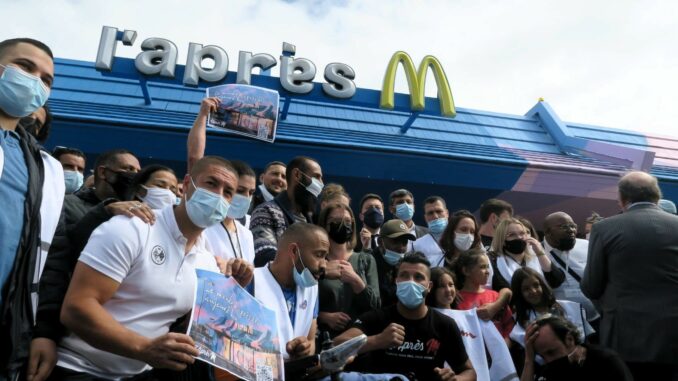 In Marseille, France, the community wants to turn a closed McDonalds into a people’s restaurant.

Marseille is in a region of France where the right, and especially the far right whose party is the National Rally (RN), has significant political strength but not total sway. The RN came in first in the first round of regional voting June 20.

The 14th Arrondissement of Marseille had a poverty rate of 35%, even before the pandemic, and an unemployment rate higher than the rest of the city; it’s population is predominantly North African migrants and their descendants.

McDonald’s shut down its restaurant in this neighborhood December 2019, claiming it was unprofitable. One hundred people lost their jobs. But workers decided they would occupy the building and set up an association called the After-M (l’après M). They wanted to turn the page while keeping a reference to the past. (tinyurl.com/wvvtwmjh)

They had support from some progressive forces in Marseille city government and people who work with José Bové, a prominent French farmer activist. A number of the leaders of the After-M had ties to social welfare programs in Marseille.

When the first lockdown was imposed in France, the 14th Arrondissement was hit hard, and many families started to go hungry. But the After-M was set up and could distribute food baskets and prepare vegan burgers, veggie burgers and other prepared foods. It has handled over 100,000 requests for food since the pandemic hit.

There is a lot of effort going into giving the After-M movement a permanent place in the social welfare programs in Marseille. There is a subscription drive that has been organized to let the neighborhood participate in buying buildings from McDonald’s, and the city government might be able to provide some cash.

Preliminary results in the June 27 election, taking place as this article was being written, have the RN losing by 7 or 8 percentage points to their center-right opponents. Given that the RN had won the first round of voting last week in a very fragmented race by about this percentage, losing in the second round is a sharp rebuke.