The National Football League, founded Sept. 17, 1920, at last has its first openly gay active player. On June 21 Las Vegas Raiders defensive end Carl Nassib announced on Instagram: “Just wanted to take a quick moment to say that I’m gay. I’ve been meaning to do this for a while now, but I finally feel comfortable enough to get it off my chest.” He also stated he was donating $100,000 to the Trevor Project, a suicide prevention organization focused on LGBTQ+ youth. 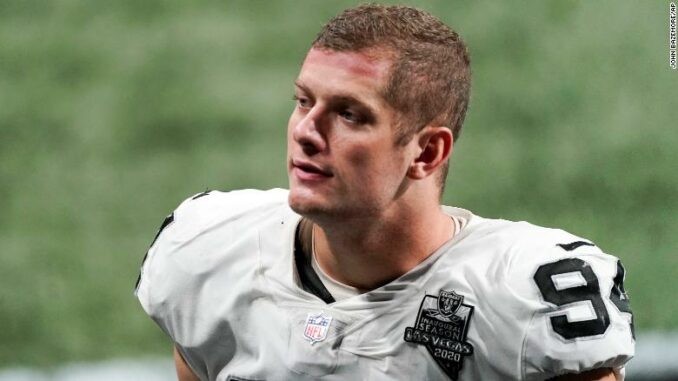 Nassib’s courageous decision follows the example of Michael Sam, an African American player who told ESPN in 2014 that “I am an openly proud gay man,” before being drafted by the St. Louis (now Los Angeles) Rams. Sam played not one game in the regular season and retired the following season, citing mental health concerns. Sam immediately supported Nassib, saying “LGBTQ+ people are more likely to commit suicide than heterosexuals. I hope and pray people will take note to this. Thank you again Carl and look forward to seeing you play on the field.” (CNN, June 22)

Before Sam, gay NFL players only went public with their sexuality after they retired; the first, in 1975, was former San Francisco 49ers running back David Kopay.

Jason Collins, the first NBA player to come out in 2013, said he was “very proud” of Nassib and “incredibly happy for him.” Collins was the first openly gay athlete in any of the four major U.S. professional sports leagues. (CNN, June 22)

Raiders quarterback Derek Carr has expressed solidarity with Nassib, as have Nassib’s other teammates and his coach, Don Gruden. Supporters also include sports legends like quarterback Warren Moon and baseball and football All-Star Bo Jackson.

Nassib has the backing of his union, the NFL Players Association. NFLPA Executive Director DeMaurice Smith tweeted: “Our union supports Carl and his work with the Trevor Project is proof that he — like our membership — is about making his community and this world a better place not for themselves, but for others.”

While the media has focused on the experiences of gay male athletes, trailblazers in the U.S. also include lesbians like soccer start Megan Rapinoe and former WNBA player Latasha Byears, as well as trans triathlete Chris Mosier. Around the world hundreds of LGBTQ+ people in a wide range of sports are knocking down the closet doors.

But the fact that Nassib is making history now, after over a century of NFL games, reminds us that the sports-industrial complex is still a bastion of anti-LGBTQ+ hatred, along with racism, sexism and ableism. That Sam and others, most recently tennis great Naomi Osaka, have had to pull back from competing to take care of their mental health speaks volumes.

When athletes speak up, they are contributing to the struggle against bigotry in sports, which mirrors the tools implemented by all capitalist bosses to divide and conquer the working class.