On June 16, Citizens for a Safer Cleveland announced success in collecting 15,000+ petition signatures for a ballot initiative addressing the major public safety issue of racist police brutality. If the signatures are approved, voters can decide in November to hold police accountable through a commission that includes community activists and families of people killed by the police. 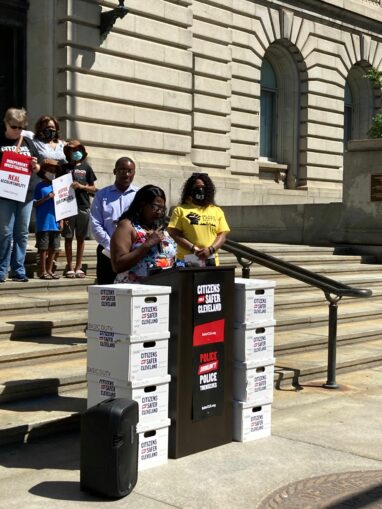 The organization held a press conference outside City Hall featuring Alicia Kirkman (pictured speaking above), mother of Angelo Miller; Brenda Bickerstaff, sister of Craig Bickerstaff; and LaTonya Goldsby, cousin of Tamir Rice and president of Black Lives Matter Cleveland. Their three loved ones were all murdered by Cleveland police.

The 15,000 signatures represent twice the number legally required to place the initiative on the ballot. The boxes of petitions were carried into City Hall after the press conference.